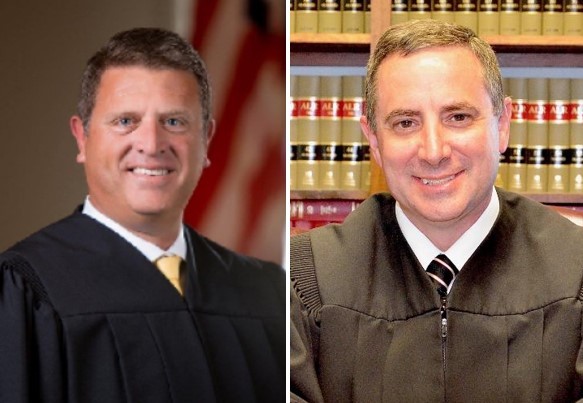 Sentiment in voter rich Madison County could play a pivotal role in who southern Illinoisans elect to the state Supreme Court.

The field will be narrowed in a Republican contest between Fifth District Appellate Court justices John Barberis and David Overstreet, with the winner of the March 17 primary going on to the November general election to face fellow appellate court justice Judy Cates, a Democrat running unopposed in the primary.

While Barberis, 52, of St. Jacob, may enjoy the Madison County home court advantage over Overstreet, 54, of Mount Vernon, an X factor could include the candidates' endorsements.

Overstreet, who defeated Democrat Kevin Hoerner by an 18 point margin, 59-41, in 37 southern Illinois counties in a 2018 appellate court race, has been lining up support from the GOP establishment since he announced his bid for the high court in November.

The latest, which came earlier this week, was from Madison County's top office holder, Board Chairman Kurt Prenzler.

In a press release, Prenzler said he was endorsing Overstreet because he is "willing and able to carry on the honorable legacy of Justice Lloyd Karmeier," and praised him for "building an impeccable record on ethics and a rock-solid reputation as a conservative, Constitutional constructionist."

Yet, on Thursday, former Madison County GOP chair Jeremy Plank said in a press release that Prenzler's endorsement of Overstreet is a personal one and not that of the county board or the county party.

"Unlike the Democrats who endorse preferred candidates, we typically let voters make up their own mind and stay out of contested primaries," he stated.

That said, Plank and other county Republicans announced they were siding with Barberis, who defeated Democrat Brad Bleyer in a 2016 appellate court race by a 12 point margin, 56-44.

Madison County board member, and Republican candidate for Circuit Clerk, Tom McRae, said that he and the majority of his fellow Republican board members felt compelled to publicly support Barberis, in light of Prenzler's announcement.

“Republican Board members were shocked that Chairman Prenzler would endorse anyone other than Judge Barberis," McRae said in the release. "Justice Barberis is a true conservative. He is pro-second amendment, pro-life and pro-common sense.”

In the 37 southern-most Illinois counties that make up the Fifth Judicial District, the two populous Metro-East counties of Madison and St. Clair hold the greatest number of votes. In Madison County, which has been trending Republican in the last decade when analyzing presidential and gubernatorial races, there are approximately 180,000 registered voters. There are about the same number of voters in St. Clair County, though it leans Democrat because of the voting block in East St. Louis.

While presidential elections generate greater turnout than mid-terms, Madison County votes should still account for roughly 20 percent of the total in the upcoming primary race for Illinois Supreme Court.

In the 2018 mid-term primary race, in which Overstreet ran unopposed, he received a total of 84,744 votes in all 37 counties (over Hoerrner's 69,967). In Madison County, he received 15,705 votes and 4,925 under votes - which is the number of people who voted in the Republican primary who did not cast a vote for Overstreet.

Each candidate's totals in Madison County were approximately 20 percent of the Fifth Judicial District totals in their respective primaries.

Will endorsements matter in the Overstreet-Barberis race?

As in previous judicial races, first for Madison County circuit judge in 2014 and appellate court in 2016, Barberis runs lean campaigns. In that first race he self-funded and spent less than $5,000. In 2016, his campaign committee raised less than $30,000 - and he survived a $1 million negative attack brought by a trial lawyer funded PAC that supported Bleyer and another appellate court candidate JoBeth Weber. In this cycle, he has not yet established a campaign finance committee.

Tom McRae said that endorsements outside of Madison County had not yet been lined up for Barberis.

Overstreet, on the other hand, has the backing of what can be described as the establishment - the Illinois Republican Party, influential Congressman John Shimkus and retired State Sen. Dave Luechtefeld, who is chairing his election committee.

Regardless of who wins and loses the Republican primary and general election, all three candidates vying for the seat Karmeier has held since 2004 would keep their places at the Fifth District Appellate Court.

And, if recent Fifth Judicial District races are a predicter, a Republican candidate stands a better chance than a Democrat, with GOP candidates having won by 18 points in 2018 and by 12 and seven points in 2016 contests.