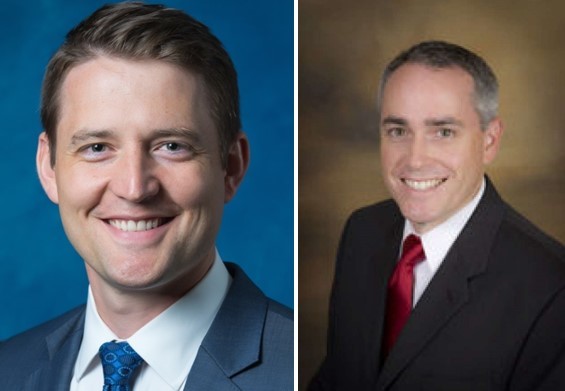 In response, Gibbons said Haine is inexperienced and suggested that his father, long-time Democrat state senator Bill Haine, would have also requested a special prosecutor. Bill Haine retired last year after serving as a state lawmaker for 16 years.

“Mr. Haine is a young, inexperienced lawyer who still has a lot to learn about legal ethics and the law. I’m pretty sure if this situation had happened while his dad was State’s Attorney, he’d have recused himself and asked for a special prosecutor because of the multiple campaign donations he received from Wigginton,” he wrote.

“What young Mr. Haine is suggesting makes me wonder if he wants to leave the door open so, if elected, he can handle cases for his campaign contributors and political cronies. I sure hope not, because when you set the bar low, you’re bound to end up in the gutter. Let’s hope young Mr. Haine isn’t headed in that direction.”

Wigginton was charged with his third DUI in less than two and a half years on Dec. 26. He was driving on a valid license after a clerical error in the circuit clerk’s office allowed him to keep his license while his previous DUI played out in court. Each of Wigginton’s three DUI cases have been handled by a special prosecutor after Gibbons declared a conflict of interest and recused his office.

Haine argues that the previous recusals “set in motion” Wigginton’s most recent offense.

“Instead, Gibbons fobbed these sensitive cases off on special prosecutors for no good reason and set the current fiasco in motion,” Haine stated. “First, there was a scheduling error that allowed Wigginton’s license to be reinstated last March. Such a mistake is unimaginable had the local State’s Attorney’s office been closely tracking this high-profile prosecution.”

“But what came next was even more disappointing,” he added. “The fact that Wigginton was legally driving around Madison County due to a clerical error just two months after his second DUI arrest would have lit a fire under a locally accountable prosecutor. But special prosecutors are not locally accountable. Nine more months went by, the case was continued multiple times, and Wigginton was arrested on a third DUI charge. Ironically, by repeatedly requesting a special prosecutor, Gibbons has given Wigginton what many feared he would get due to his political connections: weaker and slower prosecutions.”

Haine wrote that special prosecutors “serve a necessary purpose in difficult circumstances” when a conflict of interest exists, but they present risks.

“First, there is the risk that without the normal local oversight of the State’s Attorney, a special prosecutor’s case could float through the system and take far too long to resolve,” Haine stated. “Second, there is the serious risk that the punishments obtained by special prosecutors will be weaker than those that would have been demanded by the elected State’s Attorney, accountable to the people.”

Haine argues that Gibbons unnecessarily requested a special prosecutor. He wrote that while Wigginton briefly worked part-time in the State’s Attorney’s office, he left in 2010 before Gibbons was appointed State’s Attorney.

“This past employment almost a decade prior and under a different State’s Attorney is insufficient to create an actual conflict of interest,” he wrote.

Haine also argues that potential “political awkwardness” does not warrant the appointment of a special prosecutor.

“Wigginton was also a prominent local Democrat, serving as our U.S. Attorney from 2010 through 2015, and interacting with many local officials in this role,” he stated. “This background certainly made his case sensitive for Gibbons (also a Democrat). But political awkwardness does not justify requesting a special prosecutor. And an appropriately aggressive prosecution would have quickly put to rest any public concern that Gibbons may be biased and go easy on Wigginton.”

In his response, Gibbons stated that Rule 55 ILCS 5/3-9008 allows the appointment of a special prosecutor when a conflict of interest exists “or for other good reasons.”

“There are good reasons for the State’s Attorney’s Office to stay out of these cases,” Gibbons wrote.

“Here are some facts the public should be aware of: As co-workers through the late 2000s, Mr. Wigginton and I prosecuted felony cases for the office for several years,” Gibbons added. “Once he became U.S. Attorney, we also collaborated on a number of very high-profile cases and public safety initiatives – most importantly our work fighting against the opioid epidemic, beginning in March of 2011.

“These professional relationships create a real possibility the public will have doubts about whether or not an unbiased prosecution can happen. That’s called an appearance of conflict of interest, and it undermines public faith in our Justice System. As State’s Attorney, it is a very important part of my job to ensure the Citizen of Madison County trust their courts to be fair and impartial, and not a place where conflicts could cloud proper prosecutorial judgment – leading to politically motivated results.”

Gibbons added that he takes the “conservative approach” by “zealously avoiding conflicts of interest for just that reason.”

However, Gibbons’ office does not plan on recusing itself from prosecuting Timothy Michael Banowetz in the murder of asbestos attorney Randy Gori, despite having previously requested a special prosecutor in Gori’s DUI proceedings due to a conflict of interest. Gori's wife, Beth Gori, is an assistant state's attorney.

And, in the case involving the investigation of the administration of Republican county board chairman Kurt Prenzler, which was dismissed on Friday, Gibbons lost an argument seeking to keep the case. Visiting Judge Jerry Crisel asked the Attorney General's office to appoint a special prosecutor over Gibbons' objections saying there was no conflict between him and officials whose offices were raided.

Want to get notified whenever we write about Madison County State's Attorney's Offi ?

Sign-up Next time we write about Madison County State's Attorney's Offi, we'll email you a link to the story. You may edit your settings or unsubscribe at any time.