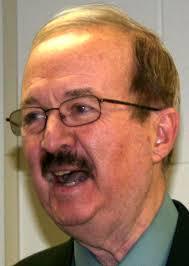 Former O'Fallon Township High School Superintendent Russell Clover who earns $185,465 in retirement is among the highest paid beneficiaries of the Teachers Retirement System (TRS), according to the Taxpayers United of America (TUA).

The TUA on Wednesday released results of its updated analysis of the state's educator pension system, including the top 200 pension payees.

“This group of government employees use our children as pawns in their demand for higher wages and benefits and yet there is no accountability, no measure of what makes a good teacher, and no way to get rid of the bad ones."

“Illinois overpays its teachers in the classroom and in retirement," he said. "80 percent of all of those property tax increases, home rule taxes, and burdensome local fines go to fund government employee salaries and benefits. Clearly, it is not for the children."

The TUA analyzes all Illinois public pension funds. Late last month, it pointed to conflicts of interest in its harsh criticism of the Judicial Retirement System.

Regarding the teachers retirement program, the TUA found:

· The total number of TRS pension beneficiaries is approximately 114,434

· The average amount that employees contributed to their own pension fund is $74,470, or 4.1 percent of estimated lifetime pension payout

· The average estimated lifetime payout is $1.5 million (based on life expectancy of age 85)

· The average age at retirement is 58

· The average years of employment are 27

· As of the end of fiscal year 2015, TRS had a 42 percent funded ratio with a $62 billion unfunded liability

“These are not poor civil servants," Tobin stated.

He said the average Illinois government teacher salary is $69,538, an average which includes part-time teachers.

Tobin also said that nearly half of the top 200 TRS pensioners collect more in retirement than their final salary while employed.

“Consistent with our findings of JRS and GARS (General Assembly Retirement System), taxpayers have already paid more than their fair share of retirement benefits for these government teachers," he said.

"Taxpayers made their payments on time and in good faith and yet these government employees expect us to pay again, and again.”

According to TRS data analyzed by the Chicago Tribune in May 2015, O'Fallon Township High School District 203 has been assessed $69,389.92 in penalties for violating a 2005 law intended to restrict salary increases above 6 percent to retiring educators.

The Belleville News-Democrat later reported in June 2015 that about half of the penalty amount - or nearly $35,000 - was due to Clover's retirement. He was paid for unused vacation time, which in effect raised his salary above 6 percent, the paper reported.