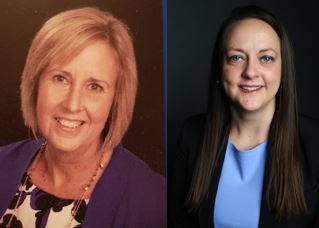 “Thank you!!!” Uhe wrote on her campaign Facebook page. “I cannot say thank you enough to all those who have supported me throughout my campaign over the past few months! We have accomplished so much in such a short period of time! I look forward to continuing to share my experience and my vision as the campaign moves forward! The race has only begun!!”

“Ran the good race and very proud of the effort and all of my support!” former Assistant State’s Attorney Jensen wrote on her Facebook page. “I can’t wait to see what is next for me!”

Uhe and Jensen entered the race for State’s Attorney after Tom Gibbons announced in December that he will not run for reelection. Instead, Gibbons is running for the circuit judge seat left vacant by the retirement of former Madison County Chief Judge Dave Hylla.

Before results were in, Jensen thanked her supporters.

“Before we get any results, I want to take time to say thank you to all of my supporters … my friends!” Jensen wrote on Facebook. “You have been with me all the way and only a few of you told me I was crazy even though I know many of you thought it! You all worked hard to contact friends and family, put out signs and brochures, take me around neighborhoods, and keep me sane when I decided I was indeed crazy! I have made new friends and reconnected with old friends and had the steady ones by my side. Above all I have learned that I made a difference in this world and for that I am blessed. I hope I never lose contact with any of you and that you know how much I love and appreciate you!”

Uhe will run against Republican Tom Haine in the November general election.

Want to get notified whenever we write about Madison County State's Attorney's Office ?

Sign-up Next time we write about Madison County State's Attorney's Office, we'll email you a link to the story. You may edit your settings or unsubscribe at any time.