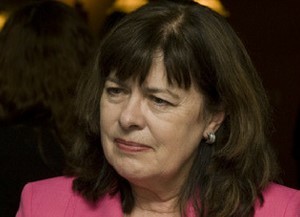 MOUNT VERNON – Fifth District appellate court Justice Melissa Chapman will retire on Oct. 1, leaving a single Democrat on a bench where that party held six of seven seats upon her arrival 18 years ago.

Justice Judy Cates, who won as a Democrat in 2012, will find herself alone.

Illinois Supreme Court Justice Lloyd Karmeier, who won as a Republican in 2004, will appoint Chapman’s replacement.

Unless he springs a surprise, Republicans will gain their sixth seat.

Time has delivered what heavy spending couldn’t deliver for Republicans, who last decade spent $2 million on a Fifth District race and lost.

Democrats have performed poorly in the last three Fifth District races, as rural sentiment swung sharply against the party.

Last year, Democratic candidate Kevin Hoerner captured less than a third of votes outside of Madison and St. Clair counties.

Chapman’s departure will create a temporary regional balance, with three Justices from Madison or St. Clair counties and three from the district’s rural side.

When Chapman joined the court, six Justices came from Madison or St. Clair.

Chapman, age 68, practiced in the firm of father Morris Chapman in Granite City.

In 1998, she joined the board of the Illinois Attorney Registration and Discipline Commission.

Welch, as the lone Republican, stood in the shoes Cates now wears as a minority.

Chapman carried 47 percent in the primary to defeat James Wexstten of Mount Vernon at 34 percent and Patrick McCann of Carbondale at 19 percent.

Republican Long of O’Fallon spent $43,221 on the general election.

Rarick meanwhile gained an appointment to the Supreme Court, but he decided to retire in 2004.

Maag took two fateful steps, running for Rarick’s seat on the Supreme Court and standing for retention at the Fifth District.

Maag and Karmeier each spent more than $4 million.

Maag suffered double defeat, falling short of 50 percent against Karmeier and short of 60 percent for retention.

Kuehn’s term had ended, but he delayed his departure by occupying Maag’s seat while Karmeier searched for someone to take Maag’s place.

In 2005, on Karmeier’s recommendations, the Supreme Court filled the Maag and Kuehn vacancies with Stephen McGlynn of St. Clair County and Stephen Spomer of Alexander County.

That reduced the Democratic majority to a 4-3 balance.

McGlynn ran to keep his seat in 2006, without opposition in the primary.

On the Democratic side, Bruce Stewart of Harrisburg prevailed in the primary over Bill Berry of Collinsville.

Stewart and McGlynn proceeded to spend more than $3 million.

That would have given a fifth seat to Democrats, except that Hopkins died two weeks before the election.

Wexstten ran to keep his seat in 2008, and Cates opposed him in the primary.

He won the general election without opposition.

The pace of change on the Fifth District bench slowed until Justice Donovan announced he would retire in 2012.

Cates and McGlynn competed for his seat that year, but state Republicans didn’t sense the urgency they sensed in 2006.

Welch’s first election, in 1980, goes back so far that the Illinois Election Board website has no record of it.

Another opening came into view in 2015, when Stewart announced he would not stand for retention in 2016.

Schwarm finished Wexstten’s term in 2016, but did not run for a full term.

Democrat Brad Bleyer of Williamson County decided to oppose him.

Weber and Bleyer spent about four times as much money as their opponents, but voters didn’t buy their message.

That tipped the court’s balance to four Republicans and three Democrats.

Justice Goldenhersh then retired, and Overstreet decided to leave his seat and run for Goldenhersh’s seat.

According to Fifth District clerk John Flood, the Supreme Court hasn’t decided when to hold an election for Chapman’s seat.

The court’s roster currently carries Welch, Moore, Barberis, Overstreet, and Boie on the Republican side, and Chapman and Cates on the Democratic side.

Welch has spent more years at the court than the other six together.

If he wishes to serve another term, he must stand for retention next year.

He turned 80 in February.