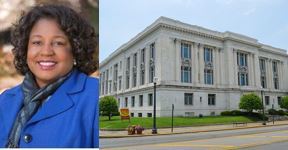 The Administrative Office of the Illinois Courts announced Friday that attorney Veronica Armouti has been appointed an associate judge in the Third Judicial Circuit to fill the vacancy left when former judge Jennifer Hightower was not reappointed to the bench.

"I am truly honored and blessed to have the opportunity to serve the citizens of Madison County and I will do my best," Armouti said.

“She has a lot of experience and an impressive resume,”Mudge said. “From what I know about her, she will make an impressive addition to the bench.”

Mudge said her assigned docket is still to be determined as he is unsure if other dockets will also be shuffled around.

Armouti said she does not have a preferred docket.

"I'm just here at the service of the circuit judges, so whatever they tell me they need, that's what I'll do," she said.

"The bench already has lots of talent and experience, so my hope is that when I come to the bench, I have experience that can compliment the already existing education, and experience, and talent that is already present … and add additional value to an already extremely talented and experienced group of individuals," she said.

"It's a surreal experience," she added. "I am truly honored and blessed to be able to serve Madison County, a county that I have grown up in and was raised here … So proud to be able to give back to the community."

Armouti grew up in Madison and Alton before becoming a longtime resident of Edwardsville for the past 26 years.

Armouti said she was an untraditional law student. She was married with a child and worked full-time when she went to law school, taking classes at night.

Following graduation, Armouti worked for HeplerBroom in Edwardsville. When she started, she said the firm had only 12 attorneys. During her time there, Armouti focused on personal injury, medical malpractice, property damage, and products liability cases.

After working at HeplerBroom for five years, Armouti joined Sandberg Phoenix & von Gontard as an associate attorney. She worked initially in the St. Louis office and later moved to the Edwardsville office.

Armouti is currently affiliated with The Senala Group in Edwardsville, which she started, and Robert Half and DTI/Eqip in St. Louis, where she does contractual work. Her current work is done simultaneously and includes toxic torts, patent law, health injury, personal injury, products liability, and more.

Armouti currently serves on the Executive Committee for United Way in the Southwestern Illinois district, an organization she says is very important to her. She is also chair of the Carol Martin Trust Committee; a member of the Chairman Chapman Society; a member of the City of Edwardsville Plan Commission, where she served as chair for two years; and a member of the State of Illinois Board of Nursing, maintaining her position under three different Illinois governors.

She previously served as a board member and executive committee member of the SSM St. Mary's Hospital Foundation Board, and she was one of the founding board members for the Edwardsville Children's Museum.

She shared a story of when the Edwardsville Children's Museum was in its infancy, and the building had to be cleaned up.

"Yeah, I used to scrub toilets in there," she said.

"Some things need to be done, and I'm not afraid to roll up my sleeves and do it," she added.

Mudge said he and the other circuit judges are currently working the docket Matoesian covered. He said he will assess what needs to be filled after he has gotten a handle on the docket.

Mudge explained that he does not want to request the circuit judge vacancy be filled until he knows what the opening entails.

While associate judge positions are filled following a vote by the sitting circuit judges, a circuit judge position is filled after a request is made to the Illinois Supreme Court justice for that particular district, who then makes a recommendation. The Supreme Court Justice for Illinois' Fifth District is Chief Justice Lloyd Karmeier, who is a Republican and would likely recommend a Republican to the bench.