SPRINGFIELD - Legislation that would restrict judges from seeking election to their own seats has been refiled after dying in a previous session of the Illinois General Assembly.

State Rep. Charlie Meier (R-Okawville) initially filed a bill in the 2016 legislative session that would clarify as matter of law that retention is the only option for sitting judges who want successive terms.

His proposal refiled on Dec. 13 is in response to decisions made by Twentieth Judicial Circuit Judges John Baricevic, Robert LeChien and Robert Haida to run for election rather than retention in 2016. Prior to the election that year, the judges submitted letters of resignation to the Illinois Supreme Court, indicating that they intended to vacate their seats and run for them in an open election rather than to seek retention. 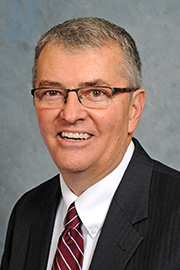 Judges seeking retention must earn 60 percent voter approval to retain their seats. Running in an election only requires a simple majority to win.

The Illinois Civil Justice League (ICJL) supports Meier's refiled bill, HB 4176. It provides that no judge or former judge may submit his or her candidacy for a vacancy in a judicial office by any method other than seeking retention in his or her office, unless that judge or former judge is seeking judicial office in a higher or lower court or he or she has not served as an elected or appointed judge for at least two years.

It had a first reading on Jan. 16 and then referred to the Rules Committee.

ICJL president John Pastuovic said the proposal would "ensure that judges can no longer game the system and ignore the intent of the law by running for election rather than retention."

The measure would limit venue for actions against corporations, partnerships and insurers in which no party is a resident of Illinois, and where another forum has jurisdition. It also would make changes to joint and several liability law by attaching when a defendant is found to be 50 percent at fault rather than at 25 percent. Finally, it would limit how much could be recovered for medical care, treatment, or services and caretaking expenses to amounts actually paid for rather than amounts initially billed.

"Until these reforms are made job growth will remain stagnant because businesses will not invest in Illinois," he said.