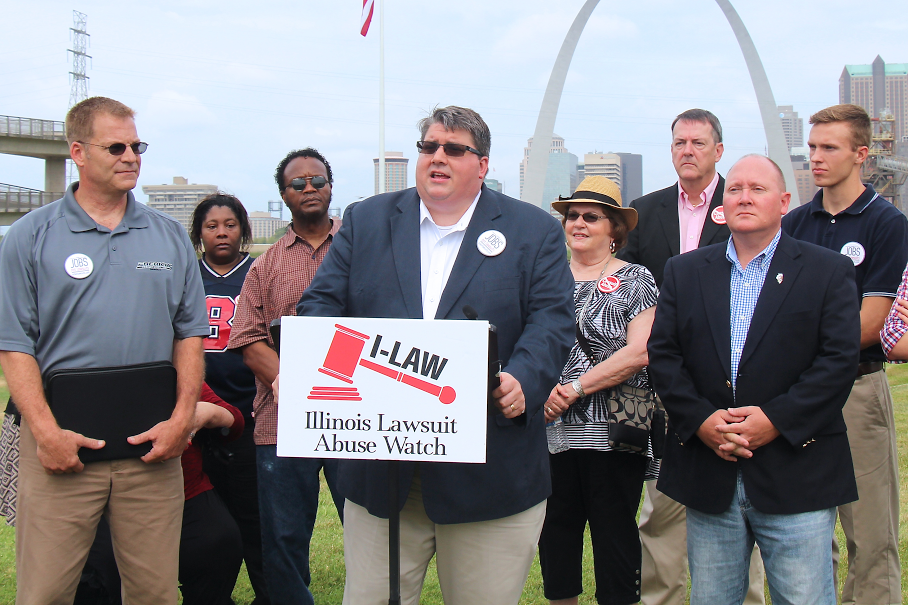 For Belleville trucking operator Bill Frerichs, one of his biggest worries he says is what trial lawyers can do to his family's nearly 70-year-old business.

Two years ago, his business Frerichs Freight Lines was named as a co-defendant in an independent contractor's suit against one of his customers over an injury that didn't involve any of his equipment or personnel, nor did the alleged injury take place on his premises, he said. The lawsuit was settled with his company being found to be 15 percent responsible.

He said that even though lawsuits may be found to be meritless in court, they cost a lot to defend and could have the effect of putting a small business like his, which employs 15 people, out of business.

The threat of litigation is "ever-present" in the Metro-East, he said.

Frerichs and others joined Illinois Lawsuit Abuse Watch (I-LAW) at a press conference in East St. Louis staged with the Arch prominently in the background.

Travis Akin, executive director of I-LAW, praised the judicial climate on the other side of the river where a recent Missouri Supreme Court decision clamped down on "venue shopping" and the Missouri legislature this spring advanced civil justice reforms.

Akin chose the East St. Louis location and the timing of a recent state budget that came with a 32 percent income tax increase and without structural reforms to highlight differences between Missouri - the Show Me state - and Illinois, which he calls the "Sue Me" state.

He said that Missouri has responded to "a growing lawsuit abuse epidemic there by moving swiftly this year to enact meaningful lawsuit reforms that will stop personal injury lawyers from filing junk lawsuits against employers."

That "epidemic" may be explained by an explosion of product liability suits against Johnson & Johnson over its talcum powder which litigants have claimed causes ovarian cancer. The surge in lawsuits brought by plaintiffs from across the country may also explain why the City of St. Louis was given the American Tort Reform Association's dubious distinction of being the nation's number 1 "Judicial Hellhole" last year.

In the last year, St. Louis City Circuit Court has been site of several jury verdicts totaling more than $300 million against Johnson & Johnson, but the string of verdicts was upended last month as a result of the U.S. Supreme Court Bristol-Myers Squibb decision. Legal experts say the ruling will have the effect of limiting the number of out-of-state plaintiffs that can join in-state plaintiffs in mass actions.

When the Bristol-Myers Squibb decision was announced it prompted a magistrate for St. Louis Circuit Court Judge Rex Burlison, who has presided over talc trials, to declare a mistrial in the midst of a case that had been under way for about a week.

In the wake of the recent combative legislative session, Akin criticized Illinois House Speaker Michael Madigan and Senate President John Cullerton, saying they "failed to allow votes to be taken on common sense lawsuit reforms that had been introduced early in the session."

"By contrast, the legislatures in neighboring states Missouri and Iowa both passed lawsuit reforms this year that were expressly designed to make their states less friendly to personal injury lawyers and more friendly to job creators," he said.

Frerichs said that given Missouri's "fairer" lawsuit system, it would not be surprising to see employers moving out of state where "they won't have a lawsuit target on their back."

"We should not have to move to keep jobs safe," he said.

Doug Jameson, St. Clair County GOP chairman and candidate for state representative in the 113th House District, said that in his job as a realtor he sees first hand people - particularly millennials - and businesses leaving the area for better opportunities elsewhere.

"In Belleville, you can't drive 300 feet before you see a for sale sign... or vacant commercial property," he said.

Jameson is running for the House seat occupied by incumbent Rep. Jay Hoffman (D-Belleville), an attorney who is backed by the trial lawyer lobby. He took aim at the group.

"For too long, our job creators have been hurt by frivolous lawsuits which line the pockets of lawyers and provide unlimited campaign contributions to greedy politicians," Jameson said.

In response to I-LAW's press conference, the Illinois Trial Lawyers Association prepared a statement, calling it a PR stunt and a "deplorable call to strip lower and middle-income Illinoisans of their constitutional right to access the courts their tax dollars fund, simply for the sake of higher corporate profits. Illinois’ legal system provides a level playing field for individuals to force wrongdoers to make amends. Next time, Akin should hold his event on the St. Louis riverfront and look east to Illinois for inspiration."

The ITLA statement criticized the location of the press conference:

"Today, I-LAW and its big business backers have chosen East St. Louis, one of the poorest communities in Illinois, as the place to hold a celebration of new Missouri laws that, if enacted in our state, would stack the economic deck further against lower and middle-income families and shift the burden of caring for those harmed by corporate malfeasance away from those who caused the injuries and onto the backs of taxpayers."