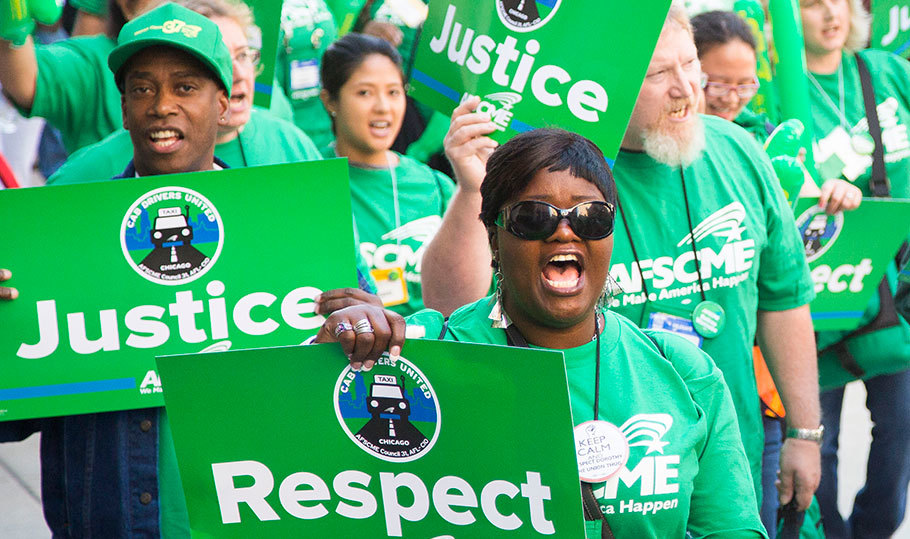 The American Federation of State, County and Municipal Employees says it is willing to strike a compromise if only Gov. Bruce Rauner will come back to the bargaining table. But when union officials say they’ll forego more money and will contribute more to health care costs, they’re not being forthcoming about their true intentions. AFSCME’s “compromise” proposals would still remove Rauner from negotiations on health care costs – and would still include raises for workers.

And now the union is using its fake compromise as a platform to strike.

On Jan. 9 AFSCME sent a letter to media with a “framework” of provisions on which it might be willing to compromise. But this “olive branch” is simply more smoke and mirrors from a union determined to eke out more money from state taxpayers.

When the state didn’t fall for this fake offer, AFSCME leaders turned, once again, to strike threats. In a Jan. 13 letter to union members, which was posted on CapitolFax.com, AFSCME leadership announced it will hold a vote to authorize a strike between Jan. 30 and Feb. 19.

Illinois is in deep financial trouble. The state has nearly $11 billion in unpaid bills, pension debt of $130 billion, and the nation’s worst credit rating. Yet over the course of almost two years, AFSCME has refused to compromise on contract demands that would cost the state an additional $3 billion in wage and benefit increases.

AFSCME claims its “framework” is a compromise. But a closer look at that “framework” – and particularly the alleged “compromises” on wages and health insurance – reveals AFSCME is really proposing more of the same, and potentially basing a strike by 35,000 state workers on a fake offer.

AFSCME claims it is willing to forego any increases in base wages in all four years of the contract. To the average taxpayer, that looks like a concession. But there is more to AFSCME salaries than base wages.

AFSCME’s previous contracts also included “steps” and “lanes,” convoluted raises based on seniority. “Steps” are semi-automatic raises that are added to an employee’s salary simply for working another year. Some employees also earn “lane” increases, which are semi-automatic promotions that place the employees on a different wage scale. So in addition to base wage increases negotiated in past contracts, employees were also eligible for two other extra wage increases.

If it sounds confusing, that’s because it is. Government-worker union contracts frequently include step and lane increases designed to hide raises from the public.

Even though AFSCME may appear to “compromise” on base salary increases, that doesn’t tell the whole story. In fact, part of AFSCME’s “framework” called for eligible employees to move to the next step in fiscal years 2018 and 2019.

AFSCME also claims it is willing to accept increased health insurance premiums, co-pays and deductibles for fiscal years 2017, 2018 and 2019. But it wants those increased costs determined by an “independent arbitrator.”

Think of this as “Senate Bill 1229 lite.” In 2015 and 2016, AFSCME tried to push through legislation (SB 1229 and House Bill 580) that would have forced the state out of contract negotiations and into arbitration with an “independent arbitrator.”

These bills were designed to strip the state of its bargaining power by allowing a panel of unelected arbitrators to step in and draft a binding contract between the state and AFSCME. Rauner vetoed the bills, and the Illinois General Assembly was unable to override that veto. But had either bill been enacted, AFSCME would have been able to leave the bargaining table and place all issues before a third party – which would not be accountable to Illinois voters.

What’s more, there is no guarantee that an “independent arbitrator” would actually increase employees’ contributions to health insurance. In fact, under AFSCME’s proposed language, an arbitrator would be able to decide not to increase contributions at all – or even to decrease worker contributions. Research demonstrates that arbitrators usually side with unions.

AFSCME lost, but it wants to reopen negotiations

Another part of AFSCME’s “framework” is “further negotiations on all other outstanding issues.” That is no compromise – that is AFSCME wanting to start negotiations all over.

AFSCME already lost. The Illinois Labor Relations Board determined that AFSCME and the state are at impasse in contract negotiations and has given the governor the go-ahead to implement his last contract offer. The only thing standing in the way is AFSCME. Rather than accept the contract and move on, AFSCME ran to state courts to stop implementation of the contract. Now it is trying to get around the labor board’s decision by offering disingenuous “compromises,” demanding further, futile negotiations, and calling a strike vote.

If AFSCME were really interested in moving ahead, it would accept the governor’s last offer. AFSCME’s “framework” isn’t about compromise. It’s a publicity stunt and a bogus reason for a potential strike over unreasonable demands.