Jurisdiction must be settled before showdown between Rauner and unions can begin; Unfunded pension liability at $111 billion, governor says 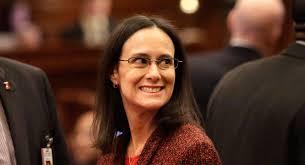 SPRINGFIELD – Before the great contest between Gov. Bruce Rauner and state employee unions can begin, judges must settle a great contest over jurisdiction.

Both suits pertain to an executive order that would prohibit unions from deducting payments from checks of state employees who do not belong to the unions.

Senior District Judge Robert Gettleman of the Northern District of Illinois presides over the federal suit.

As of April 7, no one presided over the St. Clair County suit. Circuit Judge Robert LeChien recused himself on that date, after Rauner moved for substitution.

In Illinois, any party can exercise a right of substitution once, if the judge has not made a substantive ruling.

Under current collective bargaining agreements, a state employee who chooses not to belong to a union must pay a “fair share” of union dues.

According to Rauner, 6,582 of 46,573 state employees choose fair share payments. That roughly equals one of every seven. Rauner also claims that deductions for some fair share employees amount to 99 percent of what regular union dues are.

While Rauner and the unions litigate in public view, they separately negotiate bargaining agreements that all expire on June 30.

Former Democrat governor Pat Quinn and the unions reached those agreements in 2012, when the prospect of Quinn losing to a Republican may have appeared remote.

He signed the order relieving state employees of fair share payments on Feb. 9, and petitioned the federal court in Chicago to declare the payments unconstitutional.

He wrote that according to the U.S. Supreme Court, compelling support for a union impinged on First Amendment rights of free speech and association.

Murashko wrote that the unions must certify that fair share deductions do not exceed membership dues.

“The unions do not, however, provide an accounting of how these fees are calculated,” Murashko wrote.

Since 2004, the unions have negotiated wage increases of 80 percent, Murashko wrote. Over the same period of time, he added, inflation was 26 percent, and private sector wages increased 31 percent,

"[T]he compensation packages secured by unions have contributed to a staggering structural budget deficit," he wrote.

He wrote that pension costs in the current fiscal year exceed $7.5 billion, or 24 percent of state source general fund revenues.

He wrote that the unfunded pension liability exceeds $111 billion.

On March 5, the unions sued Rauner in St. Clair County.

“The order is patently illegal,” Joel D’Alba of Chicago wrote. “It is outside the governor’s authority under the Illinois Constitution.”

He wrote that Rauner asked state comptroller Leslie Munger to create an escrow account for fair share payments, and she refused.

“Rauner then announced that the agencies in the executive branch would take action without the comptroller to implement the executive order,” D'Alba wrote.

“The express purpose of the executive order is to deprive the plaintiff unions of resources that they need for effective collective bargaining.”

Chief Judge John Baricevic assigned the suit to Circuit Judge Stephen McGlynn, but the unions moved for substitution and McGlynn granted it.

On March 10, Rauner removed the suit to federal court in East St. Louis.

On March 17, the unions moved to remand the suit to St. Clair County. They also moved to accelerate the briefing schedule.

Rauner counsel Matthew Ford of Chicago opposed acceleration on March 20, asking for the normal 30 days to respond to the motion for remand.

Ford wrote that Rauner intended to move for transfer.

Rosenstengel recused herself on March 23, and the suit bounced to District Judge Staci Yandle by random draw.

Yandle didn’t accelerate the briefing. She ended it.

On the day she took the case, without giving Rauner a chance to respond to the motion for remand, she remanded the suit to St. Clair County.

Baricevic assigned LeChien. Rauner moved for substitution on March 31, and LeChien granted it a week later.

Meanwhile, in Chicago, Madigan intervened on the side of the unions and moved to dismiss Rauner’s suit.

Rauner did not oppose her intervention, and Gettleman granted it at a hearing on March 10.

Gettleman asked for briefs on jurisdiction and standing. He set a hearing May 14.

The roster of defendants in Gov. Bruce Rauner’s suit at federal court in Chicago captures the breadth and depth of union involvement in Illinois government: