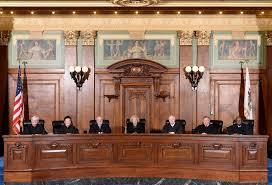 SPRINGFIELD – While nations count on Bayer for relief from the coronavirus, the Illinois Supreme Court considers whether every American has a right to sue Bayer in Madison County.

At oral arguments on March 18, the Justices heard Bayer’s challenge to a pair of actions featuring 21 plaintiffs from Illinois and 160 from other states. The drug maker’s argument focuses on the landmark U.S. Supreme Court decision in Bristol-Myers Squibb which held that a California court lacked personal jurisdiction on claims brought by non-residents who did not suffer their alleged injury in California.

The first case was filed in July 2016 on behalf of 95 women. Lead plaintiff Christy Rios resided in Madison County, seven others resided in Illinois, and 87 resided in other states.

Bayer counsel Jason Rankin removed the suit to district court in September 2016. He moved to dismiss claims of plaintiffs from other states at the threshold.

Callis’s associate Sean Jez of Houston moved to remand it for lack of subject matter jurisdiction, and District Judge Staci Yandle granted the motion in October 2016. Bayer appealed to the Seventh Circuit in Chicago.

In November 2016, Callis filed an Essure suit for Nichole Hamby of Bethalto, 12 other Illinois women, and 73 from other states.

Bayer removed it in January 2017, and Jez moved to remand it.

On June 19, 2017, the U.S. Supreme Court shifted the boundary of litigation in Bristol-Myers Squibb.

For a court to exercise specific jurisdiction, “there must be an affiliation between the forum and the underlying controversy,” the court ruled. And without a connection, “specific jurisdiction is lacking regardless of the extent of a defendant’s unconnected activities in the state.”

To date, the BMS decision hasn’t affected the Essure litigation in Madison County.

Then in light of Bristol-Myers Squibb, Bayer moved to dismiss.

Callis responded that Bayer conducted clinical trials for Essure in Illinois, tested its marketing in Illinois, and launched an accreditation program for it in Illinois.

On April 18, 2018, Ruth denied the motion to dismiss the Rios suit and Mudge denied it in the Hamby suit.

Both judges found the claims of nonresidents directly arose from Bayer’s purposeful activities in Illinois or were related to them.

They found it wouldn’t be unreasonable to require Bayer to litigate in Illinois.

Bayer appealed to the Fifth District Appellate Court, which affirmed Mudge and Ruth in May 2019.

Justice Thomas Welch wrote that Bayer focused on actions of the plaintiffs and whether they were injured in Illinois or had the device implanted in Illinois.

“That is not the correct analysis under the case law,” Welch wrote.

He wrote that the court must look to Bayer’s conduct in Illinois and whether the complaint arose from that conduct or was connected to it. He also wrote that all conduct cited by plaintiffs related to testing, developing, and marketing, and all claims arose, at least in part, from conduct in Illinois.

Bayer petitioned for Supreme Court review, arguing the decision invited the harm of forcing a nonresident defendant to submit to the coercive power of a state.

“The alleged links to Illinois that the circuit court found sufficient are so highly attenuated from plaintiffs’ claims that they would not distinguish Illinois from dozens of other states across the country where Bayer sold, marketed, or studied Essure,” Rankin wrote for Bayer.

He wrote that 155 plaintiffs from other states in the Illinois suits filed duplicate claims in California, where Essure was developed and initially manufactured.

“A coordinated proceeding of thousands of plaintiffs concerning Essure is currently pending there,” he wrote. “Since Bayer first raised this issue, many of these refiling plaintiffs have voluntarily dismissed their California complaints.”

He wrote that former District Judge David Herndon dismissed a suit over blood thinner Xarelto in light of Bristol-Myers Squibb.

He also wrote that plaintiffs from other states didn’t allege that Bayer trained any of their physicians in Illinois.

In December, Callis responded that Bayer conducts Illinois clinical trials to this day.

“Bayer’s safety and effectiveness misinformation was derived from those clinical trials and studies,” she wrote.

She wrote that in 2004, Bayer began a marketing campaign for Essure in Chicago, and that it included radio, print, and direct mail arriving weekly at offices of Chicago physicians.

She wrote that Bayer used the Chicago campaign to predict national results.

“Without Bayer’s Illinois connections and contacts, plaintiffs would not have had their Essure contraceptive devices implanted.”

She wrote that this wasn’t the case with Plavix, the drug at issue in BMS.

She wrote that a host of false and misleading tactics could be tied to the strategy Bayer created in Illinois, “which eventually spread nationwide.”

In reply, Rankin wrote that Illinois has no interest in claims brought by nonresident plaintiffs against nonresident defendants for injuries that occurred elsewhere.

He wrote that the fact that 21 Illinois plaintiffs might litigate in Illinois was no reason to try claims of 160 others in Madison County.

At oral argument last week, a Justice asked Jez to distinguish between his case and Bristol-Myers Squibb.

Jez said, “This is where it all began.” He said Bayer still does studies in Illinois, “and that’s a big distinction.”

While the Justices ponder the question, Bayer continues to defend itself in Madison County.

A third Essure suit that Callis filed in 2018 remains pending, with 17 Illinois plaintiffs and one from Indiana.

Bayer removed it to district court, but Chief District Judge Nancy Rosenstengel remanded it upon finding she lacked jurisdiction.

On March 19, in a national emergency, Bayer announced it would donate three million tablets of Resochin, a malaria medicine it developed in 1934.

Bayer’s announcement stated that Resochin “appears to have broad spectrum antiviral properties and effects on the body’s immune response.”

It further stated that evolving research in China showed potential in treating patients. Bayer says it will work on an emergency use authorization for Resochin, which the government has not approved for use in the U.S.

“Bayer is committed to the principles of sustainable development, and the Bayer brand stands for trust, reliability and quality throughout the world,” the announcement said.