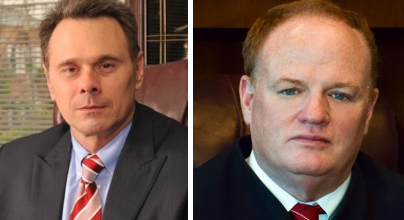 On March 11, his attorney Michael Lawder of St. Louis wrote that prejudice against Duebbert “is too high to be constitutionally tolerable.”

He wrote that when Duebbert initially filed the suit in U.S. district court, all judges there recused themselves.

He first exercised a right of substitution against Circuit Judge Christopher Kolker, who presides by assignment of 20th Circuit Chief Judge Andrew Gleeson.

Any party in an Illinois court can substitute a judge once without cause if the judge has not made a substantive ruling.

Next, Lawder petitioned to substitute the remaining judges of the circuit for cause.

“All of the 20th Circuit judges are personally friends or acquaintances of the defendant Brendan Kelly,” he wrote.

Rodriguez signed an affidavit accusing Duebbert of abuse in 2017.

Enyart gave it to Collins and Crimm, who gave it to Lamken-Finnell and Robinson.

Duebbert claims they learned that Rodriguez embellished the affidavit but they didn’t disclose it to him.

He claims they offered him a plea agreement without disclosing the embellishment.

In 2018, with trial about to begin before visiting judge Michael McHaney, they dismissed the charges.

According to Lawder’s petition, the root of the prejudice against Duebbert was the fact that he defeated chief judge John Baricevic in 2016.

He wrote that Duebbert was one of two Republican judges in the circuit. When Duebbert was sworn in, no Democratic judge from the circuit attended and Circuit Judge Stephen McGlynn swore him in.

The petition states that Gleeson removed him from part of his judicial duties and advised him that he couldn’t trust him because he was gay.

It further states that Gleeson advised him that the felony judges believed he didn’t have the experience to perform felony or misdemeanor arraignments.

Duebbert was removed from the active bench by Gleeson who placed him on administrative duties before he was charged with any crime.

The petition says that judges ostracized Duebbert and some never spoke with him.

It also says that a factual situation involving Duebbert and 22 Democratic judges mandated recusal solely on the appearance of impropriety.

It cites Gleeson's request of the Illinois Supreme Court to assign a judge of another circuit in the Rodriguez case out of "a public necessity."

He wrote that Gleeson and others filed complaints against Duebbert with the Judicial Inquiry Board and the Attorney Registration and Discipline Commission.

The judicial inquiry resulted in his removal.

Kelly, now state police superintendent, moved to dismiss the suit on Feb. 28. He pleaded probable cause and prosecutorial immunity.