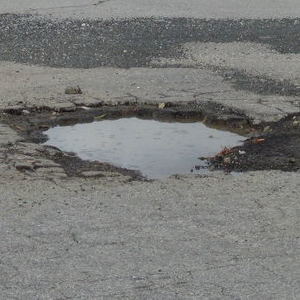 EDWARDSVILLE - A bicyclist claims he was injured after hitting a pothole in a poorly lit street in Granite City.

Macke filed suit against the city March 2 in Madison County Circuit Court, claiming the municipality knew of the pothole and of the danger, but failed to repair it for days, possibly months.

The pothole, claims Macke, was situated toward the middle of the street near a water valve cover. The street was not well lit as the nearest lamp was "unusually close to the ground" and situated at the intersection with Washington Avenue.

Macke states he was cycling along the street around 9 p.m. and that his headlight was in working order.

But suddenly and without warning, the front tire of the bike fell into the pothole causing him to lose control and fall off, the complaint states.

He claims the defendant  had a "duty to exercise ordinary care to maintain its property in a reasonably safe condition," according to the suit.

Macke alleges Granite City's employees knew of the pothole prior to the incident and failed to repair the hole. Further, there were no warning signs.

The plaintiff claims the hole was on the road for days if not months, and that it could have been fixed at relatively low cost.

The defendant breached its duty of care by failing to fix or warn.

According to the complaint, the plaintiff suffered a fracture to his right forearm along with an infection and contusions to his left hand.

He needed surgery, spent money on hospital and medical bills, and damaged his bike, the suit states.

Macke, who is seeking more than $50,000 in damages, is represented by attorneys Bill T. Walker of Granite City and James E. Parrott of St. Louis.