Suspects arrested by fake police sue in federal court; Madison County had similar force til Court shut it down 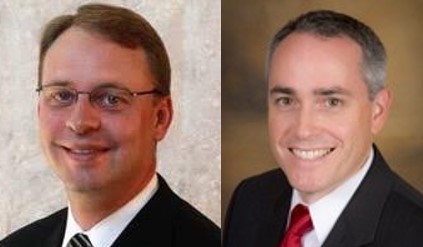 Their sentences were vacated after the Illinois Supreme Court ruled that Towne broke state law by deploying investigators as police.

Towne formed the team in 2011, to stop and search vehicles on Interstate 80.

Madison County State’s Attorney Tom Gibbons set up a similar team in late 2014, modeled after the LaSalle County program, but suspended it while it was under court review and disbanded it after the Illinois Supreme Court’s ruling. Of the state's 102 counties, these two were the only ones to establish the program.

According to a county official, Gibbons spent $120,000 on the program. Gibbons has said his team had made no arrests or seizures.

In LaSalle County, cash seizures paid for team operations and provided further funds for Towne to distribute to causes he deemed worthy.

His team stopped Straker on Dec. 20, 2014, according to a suit attorney Jack Boehm of Lake Bluff filed in November.

Boehm wrote that an unmarked vehicle pulled him over and an officer told him he drove 73 miles an hour in a 70 zone.

“The real reason that Officer 1 stopped plaintiff Straker was the fact that he was traveling in a vehicle with out of state license plates,” Boehm wrote.

He wrote that the officer sat in front, another vehicle showed up, and a second officer walked around the Cadillac with a dog.

He wrote that the dog alerted the officer, and the first officer told Straker they would take him to the police station.

The second officer drove Straker’s car without his permission. And, at the station, the officers discovered marijuana.

Eventually, Straker’s sentence was vacated and all charges were dismissed in November 2017. But not before he was fined $31,000.

“Defendant officers did not have an arrest warrant, probable cause, or any other legal justification to arrest plaintiff,” Boehm wrote.

According to their suit, they were passengers in a rented Nissan Pathfinder that the team stopped on Dec. 19, 2013.

Boehm wrote that an officer told the driver she was traveling in the passing lane while overtaking a slower vehicle.

He wrote that the plates were the real reason for the stop.

He wrote that another vehicle showed up and a second officer walked around the Pathfinder with a dog.

The dog alerted, they went to the station, and the officers found a controlled substance on Bullock and Davis.

He wrote that they remained 92 days in LaSalle County jail and were sentenced to 10 years in the Department of Correction.

He wrote that they were illegally deprived of their liberty and freedom until January 2018, when their sentences were vacated and charges were dismissed.

Bullock and Davis claim they are entitled to compensation for the wrongful stop, detention, arrest, charge and incarceration. They claim loss of wages and lost opportunities, as well as emotional distress and mental suffering.

Boehm wrote that Towne’s team seized about $1.7 million in four years, some of it from stops that didn’t result in criminal charges.

He wrote that Towne and policy makers acted with deliberate indifference in maintaining, overlooking and preserving unconstitutional practices and policies.

District Judge Rebecca Pallmeyer plans one for Bullock and Davis on March 26.

As of Feb. 28, no one had entered an appearance for Towne or the county.

Chief appellate prosecutor Patrick Delfino hired him in 2016, after LaSalle County voters turned him out of office.