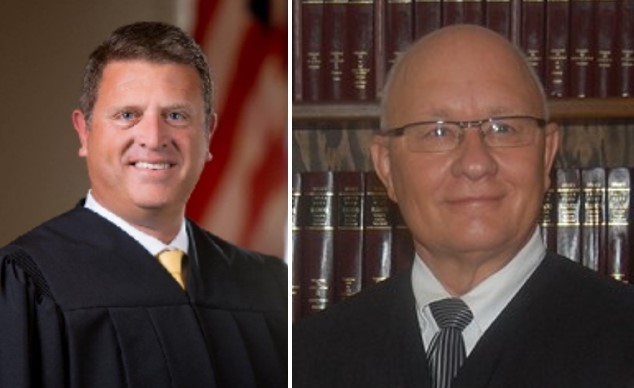 MOUNT VERNON – Reona Pearson, who won $560,563.68 for injuries she suffered when toilet paper fell on her, claims Fifth District Justice John Barberis should have disqualified himself from a decision reversing the verdict.

She petitioned for rehearing on Feb. 14, stating that Barberis previously reversed her workers’ compensation benefits from the same accident.

On a night shift in 2016, she opened a stall and a roll of toilet paper nine inches in diameter hit the top of her head. It weighed about two pounds.

Pearson’s expert mechanical engineer, Benjamin Fischer, testified that the only reason for the roll to be in its position was a prank.

Moore and Barberis found Kolker should have granted judgment for Pilot.

Moore wrote that it wasn’t reasonably foreseeable that a third party would obtain a roll of toilet paper and balance it in a way to booby trap the stall.

He wrote that the identity of the individual who caused the injuries was unknown and he found no evidence relating to how Pilot and Denny’s coexist.

He wrote that to ensure it didn’t happen again, Pilot would have to hire restroom monitors and privacy would be infringed.

Wharton found Pearson was on Pilot’s premises for business purposes regardless of whether she shopped there.

He wrote that the question was whether it was reasonably foreseeable that a patron might place a roll of toilet paper anywhere it might pose a risk.

Neither Moore nor Wharton brought up workers’ compensation.

Rich brought it up in the rehearing petition, writing that the workers’ compensation commission awarded temporary benefits for the same injury in 2018.

He wrote that Barberis, while sitting on the Fifth District workers’ compensation division, authored a decision that reversed the commission. Barberis found no connection between Denny’s and the mechanism of injury.

“The mechanism of injury is the same issue whether the claim is based on the Workers’ Compensation Act or the common law,” Rich wrote.

He wrote that Barberis had already expressed his views of the merits of plaintiff’s injury case arising from the same accident.

He wrote that there was no mechanism for a change of appellate court justices.

“Further, the first time plaintiff appellee learned who was on the panel was the day of oral argument, meaning that Justice Barberis and the panel had already reviewed the briefing and the record,” he wrote.

“Plaintiff as well as the public had the right to believe that Justice Barberis would recuse himself once he realized that this was the same case over which he had previously presided.”

He wrote that Pilot employees knew patrons would misplace and misuse toilet paper, and that they all acknowledged it could create a hazard.

He wrote that it was certainly no burden for Pilot to keep toilet paper rolls where they should be.

The three judges who heard the case will render a decision on the rehearing petition.

If they deny it, Pearson would have 35 days to petition the Supreme Court for leave to appeal their decision.

Pilot has no right to respond to the petition, but the judges can request a response.