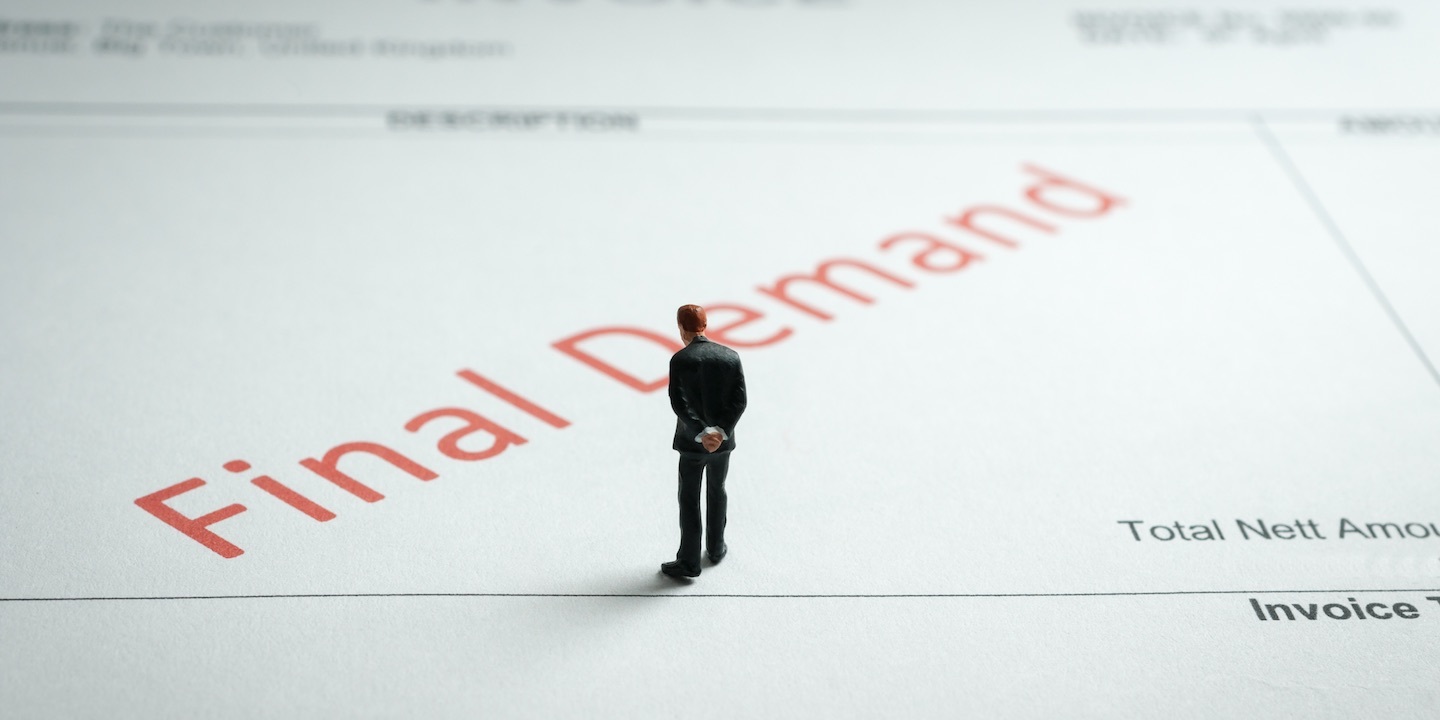 Most Illinoisans don't know it, but they're on the hook for a "shadow mortgage" of pension debts.

When Illinois' $424 billion in debts are divvied up, those shortfalls total hundreds of thousands of dollars per household, if not more, depending on who politicians target to repay those debts.

As Gov. J.B. Pritzker and other lawmakers try to extract that kind of money from Illinoisans, they’ll fail, for the simple reason that the amounts have become overwhelming. Too many households don’t have the means, while others won’t stick around to pay for it. They’ll just leave.

And as Illinoisans leave, the shadow mortgage on those who remain will jump. The crisis will only deepen.

A simple calculation based on Moody’s state and local retirement debts puts the shadow mortgage each Illinois household is on the hook for at $90,000. That’s what you get when you divide Illinois’ $424 billion in retirement debts (see appendix) by the state’s 4.8 million households.

But $90,000 is not a real number. Too many families in Illinois don’t have the means to take on that kind of debt. So the real burden on households with the means to pay is much higher.

Maybe the more “realistic” shadow mortgage amount is $215,000 per household, which is what you get when you impose the $424 billion only on those households with incomes of $75,000 or more. Does Pritzker really think those households could pay down an additional mortgage of $215,000, even if they were willing to? 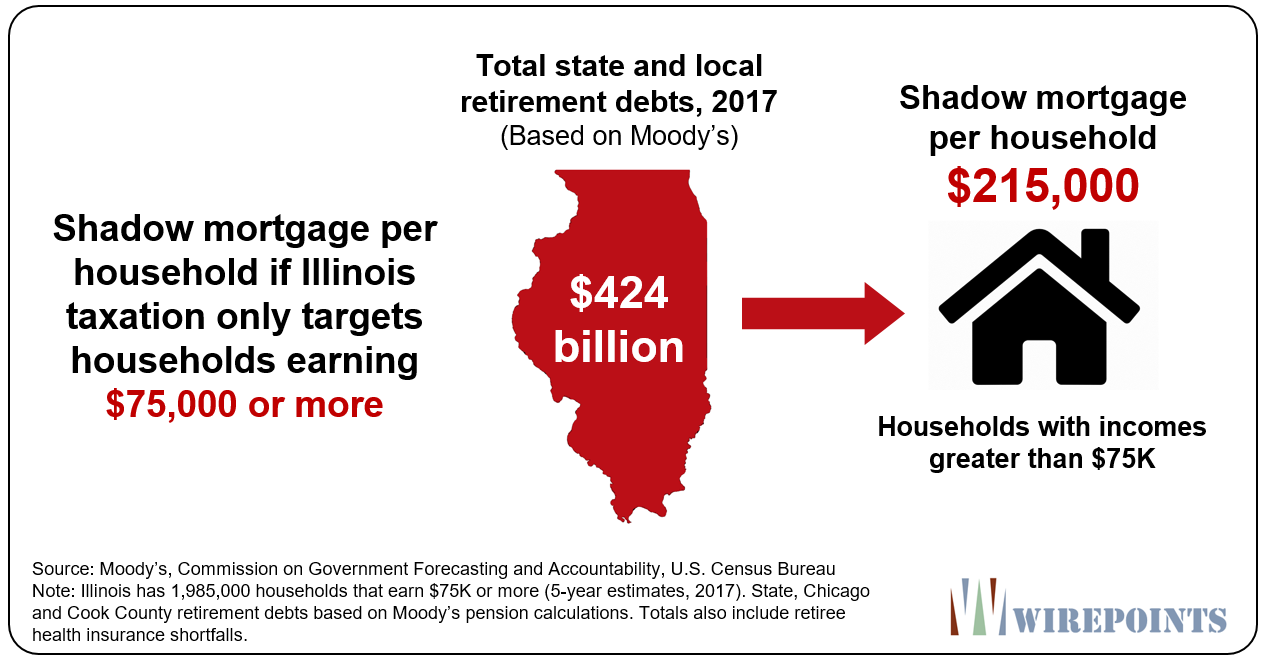 So what then? Go after only those households with incomes of $200,000 or more, like Pritzker does in his proposed progressive tax plan? Then the shadow mortgage on those 330,000 households jumps to $1.3 million each. The amounts get crazy. 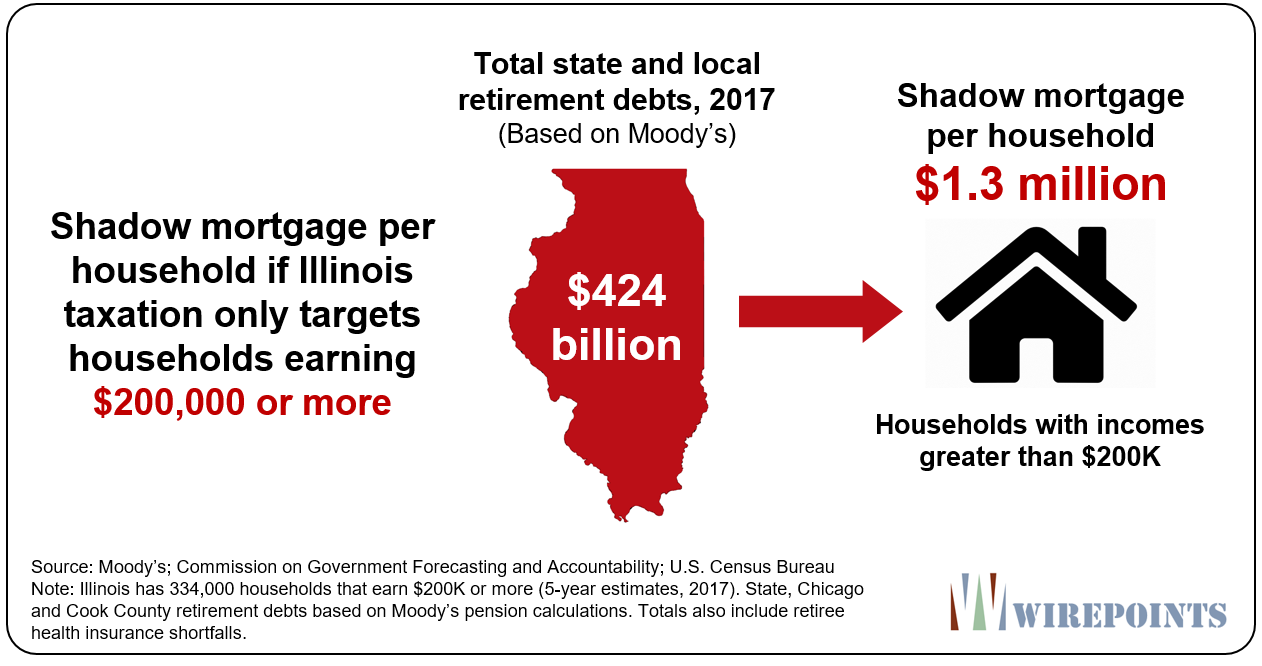 The amounts become even more overwhelming when you look at what Chicago households are on the hook for. There, the overlapping pensioner debts based on Moody’s calculations total $150 billion.

The tax hikes are only beginning

The reality is most Illinoisans have no idea what a shadow mortgage is or how much it will cost them over time.

But it would be foolish to think ordinary Illinoisans don’t feel its presence every day. They already pay the nation’s second-highest property taxes, whether it’s through home ownership or rent. And when it comes to the total state and local tax burden for Illinoisans, the Tax Foundation says Illinoisans face the fifth-highest rates in the country. Others, like Kiplinger, calculate Illinois is the least tax-friendly state in the nation.

The real problem is, most Illinois governments, including the state, haven’t even begun to tax the full amounts needed to begin paying down Illinois’ pension debts. Some are only starting.

Peoria has recently added a public safety pension fee and new stormwater fees as pensions eat up the tax base. That’s on top of the property taxes Peorians already pay. Ditto in Danville, where it, too, added a dedicated pension fee. Aurora just hiked its property taxes by 6.6 percent to help pay for pensions.

And Springfield says it needs $269 million over and above what the city expects to put in to its police and fire pension plans over the next 20 years. Local pension costs in Springfield already consume 100 percent of the city’s property tax revenues.

It’s even worse in places like Harvey and East St. Louis, where the state has begun intercepting city revenues to ensure local pension costs get paid. That’s forcing these cities to cut core services since they can no longer afford to pay their active workers and pensioners at the same time.

Like adjustable rate mortgage payments before the Great Recession, the situation will only get worse as the payments toward the shadow mortgages rise uncontrollably.

There’s simply too much debt

Moody’s calculates that Illinois has the nation’s largest pension shortfall. The $241 billion dwarfs the debts in much larger states like Florida, Texas and New York.

And pensioner debts already consume more of the Illinois budget than anywhere else in the country. State government projections show that these debts will consume at least a quarter of the budget for the next 25 years – and that’s under their rosy scenario.

The evidence is overwhelming that there’s more pensioner debt than can ever be taxed. If Pritzker continues to reject the need for a pension amendment – and the need for a reduction in pension debts – then he’s simply ignoring the evidence.

Which means that if he doesn’t want to fix pensions, he’s going to have to go hog-wild with tax increases to get the money needed to pay down all that debt.

Expect the exodus to increase as Illinoisans finally figure that out.

At Wirepoints, we're working hard to get the real facts out. If you want to make sure more people see our work, the best thing you can do is like us on Facebook!