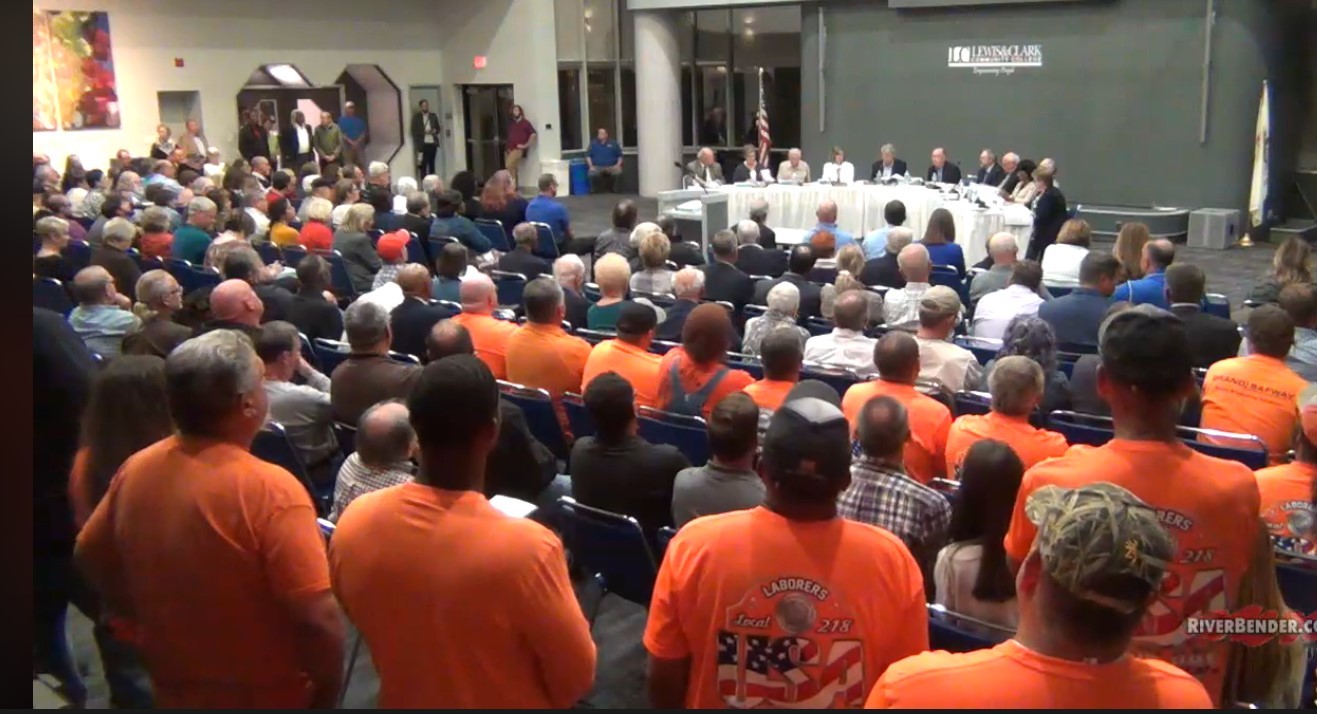 Despite intense lobbying for renewing the contract of Lewis & Clark Community College president Dale Chapman, its board voted not to on Tuesday night, 4-3.

His current contract, which went into effect in 2015, will expire at the end of June 2020.

More than 200 people packed the Ahlemeyer Atrium at the Godfrey campus and nearly all who spoke voiced support for keeping Chapman, whose compensation includes $337,000 in annual salary, a benefits package valued at $120,178 and annuities of $49,542.

In the spring election, Johnson, Rust and Hanfelder defeated three incumbents after campaigning on the issues of administrative salaries and property taxes. Heyen was elected in 2017, and for two years, was often the lone dissenting vote on the board.

Support for Chapman Tuesday night came from faculty members, people wearing "I support Dale Chapman" stickers, laborers in orange tee-shirts and politicians including Rep. Monica Bristow (D-Alton) who spoke on behalf of Sen. Rachelle Aud Crowe (D-Wood River) and others who submitted a letter to the board urging a new contract.

Bristow said those who signed the letter "fought to secure" $37.5 million for Lewis & Clark in the state's capitol spending plan "because of Dale Chapman's vision."

She also said the regional economic impact generated by the community college is $369.4 million, which is "much larger" than the taxes it uses "to accomplish its mission" and is "due to Dr. Chapman's vision and leadership."

Prior to Tuesday's vote, the RiverBend Growth Association, which serves southwestern Illinois, including Godfrey, issued a letter calling for its members to support contract renewal.

The Oct. 1 letter, which included the names of the group’s 40 directors, was sent to media outlets. It called for group members to attend the contract vote meeting and encouraged members to call trustees, with phone numbers provided.

The letter praised Chapman for growing the college, securing $200 million in grants for the college, expanding education programs and lowering property tax rates.

Among provisions of Chapma's contract that have been scrutinized include a car expense account of $2,100 per month, and another $1,500 per month “non-accountable expense reimbursement” account for which he is not required to provide receipts or other documentation of how the money is spent. The car expense account also does not require Chapman to provide receipts or documentation of expenditures, which may not align with a state law that went into effect in 2017, requiring government agencies to get documentation before paying out expenses for travel and lodging and meals.

Chapman, who holds a doctorate degree in education from Harvard, first joined Lewis & Clark in about 1990.

In 2010, Chapman retired from Lewis & Clark so that he could get access to his pension, then was rehired after two months. He said he had financial trouble at the time, due in part to a real estate deal that went bad. Chapman said he took a lump-sum payment of “about a million” for his pension. According to the State Universities Retirement System, the lump-sum payout was about $1.8 million.

Chapman in 2010 said he had to start over with his pension after he was rehired, but that he was “probably close” to being eligible for another pension.

Brian Brueggemann contributed to this report.

Want to get notified whenever we write about Lewis & Clark Community Colleg ?

Sign-up Next time we write about Lewis & Clark Community Colleg, we'll email you a link to the story. You may edit your settings or unsubscribe at any time.