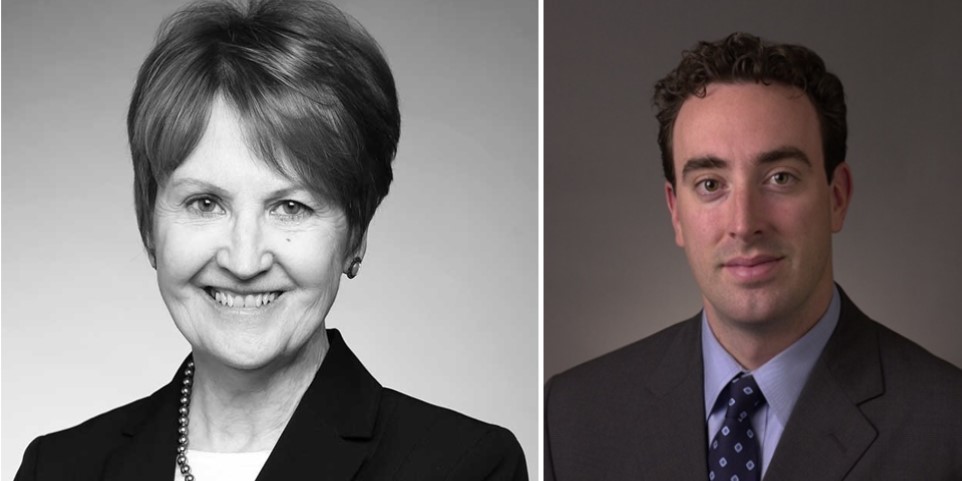 CHICAGO - Court commissioners responsible for the future of Circuit Judge Ron Duebbert examined him on Oct. 1, without examining the poitics of St. Clair County.

His hearing before the Illinois Courts Commission skirted events that happened at the time of events that form the basis of misconduct charge against him.

Through his attorney Mary Robinson of Chicago, Duebbert had asked the commissioners to introduce evidence of other St. Clair County events, but they turned him down.

They let him testify that he felt petrified when police interviewed him, but they allowed little testimony about why.

And, when St. Clair County Circuit Judge Stephen McGlynn, who appeared as a witness for Duebbert, said that Duebbert told him what happened at the "country club," chief commissioner, Supreme Court Justice Robert Thomas, stopped him.

No one all day jumped faster than did prosecutor Kevin Fee, a Chicago attorney at Sidley Austin, when Robinson asked Duebbert about a newspaper article.

Thomas called Fee and Robinson to the bench and when he finished, Robinson changed the subject to a telephone.

In the absence of local context, testimony about "the phone" filled half the day.

Paul Bateman, a colleague of Fee at the Sidley Austin firm in Chicago, spoke first. He said David Fields and Duebbert met at a gas station on Dec. 29, 2016, and Duebbert gave Fields a phone.

Fields was charged with the Dec. 30, 2016 murder of David Fields, spent two years in jail, and was acquitted of the charges last year.

Bateman said police wanted to talk to Duebbert, but that Duebbert led them astray, and didn’t tell them about phone and text messages. He said Duebbert told them much, but not things that mattered.

He said Duebbert told them that if Fields called, he would tell him to turn himself in, and said that police wasted the first night looking for information he should have given.

In Robinson's opening, she said Fields turned himself in on Dec. 30. She said reporters called Duebbert and asked if police contacted him. She said he was terrified.

"He gave them his phone," Robinson said. "He cooperated for hours and hours. Judge Duebbert was a little bit rattled at the time.”

She said his response was incomplete and muddled but was not intended to mislead.

Fee later questioned state police agent Patrick McGuire, who said officer Timothy Lawrence contacted Duebbert at about 1:15 p.m. in the afternoon of the murder. He said they interviewed him in Duebbert's kitchen. He said they wanted to make sure Fields didn’t steal his firearms.

On cross examination, Robinson asked McGuire if the officers asked Duebbert what he knew before recording him.

“I don’t recall what all we talked about before we recorded the interview," McGuire said, and that he didn’t recall anything substantive.

Robinson asked him if they were trying to locate Fields.

"I suppose so," McGuire said. "I don’t know when he got picked up.”

On that date in 2016, no one picked Fields up. He had turned himself in hours before McGuire and Lawrence questioned Duebbert.

Robinson asked McGuire if he went to Duebbert’s friend’s house to do an inventory of weapons, and McGuire said no. McGuire said they wanted him to verify that all the guns were there.

She asked if they had any information connecting Duebbert to the murder, and he said no.

Fee asked McGuire if there was conversation before the tape, and he said he didn’t remember.

“It’s been so long,” McGuire said.

One of the commissioners (number 5) asked McGuire if he asked Duebbert if he talked to Fields. McGuire said he didn’t recall.

Another commissioner (number 7) asked McGuire when he learned Fields was in custody.

McGuire answered that there were 20 to 25 detectives on the case and they had briefings.

“I don’t know when I knew that he was in custody," McGuire said.

Commissioner 7 asked how the officers knew to interview Duebbert.

McGuire said he assumed the squad commander got the phone number.

Fee then turned his questions to Duebbert.

He asked if Fields lived in his house for about a month, and Duebbert said yes.

He asked Duebbert if he told Fields to turn himself in, and he said yes.

Fee asked if Fields discussed the allegations and Duebbert said, “He denied it.”

“He said the police put a gun to his head and said they’d kill him if he didn’t cooperate," Duebbert said.

Fee asked him if he told McGuire and Lawrence he spoke to Fields.

“It appears not," Duebbert said. "I answered whatever they asked me.”

Fee showed video and asked Duebbert why he didn’t tell them he found a bag.

Duebbert said, “I think something’s missing on this (video) clip...I know I told those officers about that. Context tells us a lot.”

Fee asked why he didn’t tell them about text messages he received.

Duebbert said, “I don’t know what I saw, I was petrified at that moment. I told them in my bedroom that I was fearful David Fields would be killed.

“I gave them my phone because I had an obligation to my client or former client. I told them I thought they were harassing me. I don’t know what I was thinking at the time. I’m not sure I was thinking.

“I gave them all relevant information. I gave them information off camera. I was available for any more discussions they wanted to have.”

After lunch, Fee asked officer Lawrence if they talked before and after the recording.

“We probably talked briefly on the way in and on the way out," Lawrence said.

Fee asked how he decides what to record and Lawrence said, “If it seems important we record it.”

On cross, Robinson asked if he knew about Fields before that, and he said no.

She asked what he knew about the evidence and Lawrence said, “We knew evidence existed that connected him to the crime.”

She asked what it was, and he said he didn’t recall.

Commissioner 5 asked Lawrence if he and McGuire asked Duebbert for the phone, and he said he didn’t remember.

Duebbert returned to the stand for questions from Robinson, who asked about Fields moving into his house in 2016.

Duebbert said he knew Fields in diapers. He said Fields called, upset, and asked to come to his house. He said he told Fields it was okay if his probation officer said so.

Duebbert said he told Fields he’d have to move after his election that November.

“I wanted to avoid the appearance of impropriety," Duebbert said. “I knew there would be much more scrutiny on a judge.”

Robinson asked about his first assignments as judge.

Duebbert said the chief judge, meaning Andrew Gleeson, said they had a problem and he couldn’t have a felon living with him.

“I said thank you for your thoughts and David Fields is scheduled to move out on December the second," Duebbert said.

He said the chief judge later said he’d change his duties because he didn’t trust him.

McGlynn said he appointed Duebbert as a guardian ad litem.

“He did a great job," McGlynn said. "People opened up. He’s very thorough in research.”

Prior to Tuesday's hearing, Duebbert had tried to introduce a statement from Belleville attorney Margaret Lowery, describing a celebration of Duebbert’s situation on the night of the murder at the Belleville Country Club, but the subject matter was disallowed.

Under questioning, McGlynn said Duebbert called him on Dec. 30, 2016, at night, and told him what happened at the country club.

But, Justice Thomas stopped McGlynn from going any further with discussion about the country club.

McGlynn went on to say that only one other judge showed up for Duebbert’s swearing ceremony. He said he told the other judge he appreciated him showing up.

“I always had an impression that as a lawyer he (Duebbert) was truthful and honest," McGlynn said.

“He wanted to tell his side of the story. He felt he’d done nothing wrong.”

Fee summarized that Duebbert knew things McGuire and Lawrence didn’t know. He said Duebbert could have called the police and given them that information.

"He expounds with vigor on extraneous and irrelevant information, tight lipped on important matters," Fee said.

He referred to Duebbert’s statements about being petrified, and Robinson objected.

“I was restricted in my ability to present evidence of the judge’s fear," Robinson said.

Thomas said, “We are not going to reargue the motion.”

Robinson summarized by saying, “It’s not accurate to say Judge Duebbert was the one going all over the place.” She said the transcript of the interview falls short of obstructing a murder investigation.

"I don’t have any experience like it and I know none of us wants to." she said.