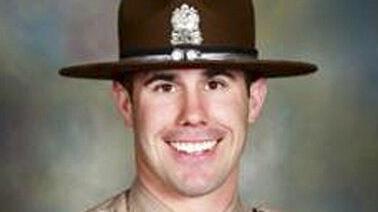 On Friday, August the 23, 2019, Illinois State Trooper Nicholas J. Hopkins was killed in the line of duty, serving a search warrant on a drug house in East St Louis.  Hopkins was 33, a 10-year veteran of the force.  He leaves behind a wife and three children.

These are the facts of the death of my nephew Nick Hopkins. But his life - and the devastating loss his death encompasses - are so much more. Nicholas loved life, all the joys of family, friends and faith. But more than that, he spread joy to all he encountered - citizens on the highway, neighbors in need, grandparents helped almost daily.  He was so very close to his Grandpa Charlie Hopkins, who - as he did with all his grandchildren - gave Nick a nickname…GATOR. No reason - just happened while they were in Florida. We called him Gator as much as Nick, something so entwined in our family culture that in final tribute, the pallbearers wore socks with Gators on them.  A silent nod of honor to one loved so dearly.   As the circle gets smaller, it gets tighter.

My niece Whitney, the widow thrust into the harsh glare of such a public event, has been an unbelievable rock. Showing strength that belies her slight frame, wisdom beyond her tender years, she has even reached out to us, making sure that we can carry on as best we can.  Her eulogy of her slain husband was the most widely viewed demonstration of her capacities, but we have all experienced it in private family moments. No words can give her proper praise.  We only can pray for her continued courage.

Nicholas took his job as a member of the Illinois State Police SWAT team very seriously, but did not take himself seriously. Much has been said about his toothy smile. But his smile held just a hint of mischief.  He loved to laugh, to dance and to party with friends and soon to be friends. From time to time, he came up to Alton to visit Uncle John and Aunt Margaret, to just catch up, to have some pie, or to play a joke on his Aunt, one time barreling down a one way street the wrong way, jumping out with his partner and announcing her arrest, causing  “St. Margaret“ to unleash a torrent of  expletives. I can still hear him laughing so hard. He loved to dance, and knew he was good at it. He would always pull aunts, great aunts, cousins, out on the dance floor at family weddings, soon to be the sole source of attraction for the whole crowd.

For the better part of 20 years, almost every Sunday the Hopkins clan gathered in Columbia on Sunday for dinner, for sports and just to be together. My children were raised with Nick, a bond that carried forth with them as they became adults. We all saw him grow through his 33 years, spent the good times and now must share the times of immense sorrow. We did not ask for this public funeral - but we have had to cope with it. Trooper Nicholas John Hopkins, Badge 6141, is now rightfully a hero in the State of Illinois. But he was already a hero to us, to the Church members he helped so regularly, to the family brightened every time Gator was near, and especially to his beloved Grandparents, who he helped so unselfishly, calling them “Stadimama” and “Stadipapa,” Pig Latin Slovak, scrambled in translation.

Robert Kennedy, no stranger to public funerals, once quoted the Greek Poet Aeschylus... “and in our sleep, pain which cannot forget, falls drop by drop on the heart, until in our own despair, against our will, comes wisdom through the awful grace of God.” I hope, I pray, that this is true, and that from this awful tragedy, we gain some wisdom.  I cannot see it now.  I truly hope such vision does eventually come.

Our beloved Gator need not only be remembered for how he died, but more for how he lived. He lived his short life full and complete, with no regrets. We need now to carry on, to love more, appreciate more, knowing in the wash of our tears, Nick is still with us in spirit. We need only to seek his presence in our memories, and then carry on. It will be hard, but he is worth it. Be not afraid.

Want to get notified whenever we write about Illinois State Police ?

Sign-up Next time we write about Illinois State Police, we'll email you a link to the story. You may edit your settings or unsubscribe at any time.