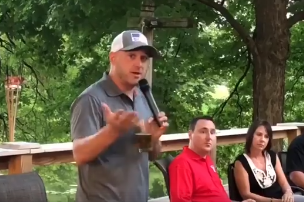 Voters in the Collinsville Area Recreation District (CARD) put an exclamation point on their desire to eliminate the financially strapped park district.

"Thank you citizens...for lowering taxes and helping our Parks!" wrote organizer of the effort, Derrick Cox. "Nearly impossible to get 80% to agree on anything."

A super-majority of yes votes - or at least 66 percent - was needed to dissolve, which effectively means that the district will no longer exist. Responsibility for the parks and assets of the district have already been transferred to Collinsville and Maryville.

CARD was created in 1991, and over time it had accumulated more than $21 million in debt through the issuance of bonds for parks - the most expensive one having been Splash City water park in Collinsville. The district also took on debt in purchasing the Arlington Greens golf course in Collinsville.

While the debt will take more than 20 years for property tax payers within the district to pay off, proponents of dissolution say that eliminating CARD will lower a portion of their property tax bills by 25 percent.

Cox also said that by dissolving, municipalities who now own the assets will be eligible to apply for state park grant funds.

City of Collinsville • Village of Maryville