No fight over the budget is bad for Illinoisans 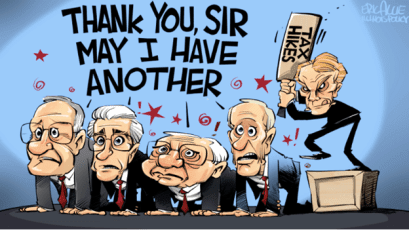 Illinois media is widely reporting that no news on Illinois’ budget negotiations is good news – that a quiet battleground in the statehouse means all is well. Especially after a nasty near three year impasse between Gov. Bruce Rauner and House Speaker Mike Madigan.

But if you are an ordinary Illinois resident, don’t buy the “no news is good news” pitch. It’s bunk for a bunch of reasons. Here are five.

1. Illinois should be a battle zone for deep reforms

Just because politicians and the media are happy doesn’t mean you will be. History tells us it’s the opposite.

The fact is Springfield should be fighting over which reforms to pass and how deep they should be.

Instead, most politicians want to do nothing but continue the status quo. And they’ll fight even the simplest reforms. The nearly three-year impasse – where absolutely nothing changed – is evidence of that.

But the status quo is unsustainable. Illinois is a fiscal and economic basketcase and its people are bearing the costs daily, many painfully. With just days left for legislators to agree to a budget in the regular session, they should be battling for reforms that are a kind of shock-therapy. Just look at the mess the state is in:

And all of the bad is happening despite a hugely positive national backdrop. The US economy is booming and the stock markets are at all time highs. Imagine what things will look like in Illinois when the inevitable recession and a stock market correction come?

There should be all kinds of noise coming out of the Illinois statehouse. If you’re hearing crickets, you can bet they aren’t fixing problems.

It’s impossible for government watchdogs to cover Springfield’s misdeeds when it’s quiet and negotiations are done behind closed doors between a handful of select “budgeteers.” Nobody seems to know anything. Read the media reports and most legislators can’t really offer any comments of value. Rank-and-file legislators know nothing, which means Illinoisans know nothing.

Do you really think those “budgeteers” are going to come out of the room with a $3 billion tax cut, property tax relief for all and collective bargaining reforms that give relief to residents in cities like Danville and Harvey and Rockford? Or with reforms to Illinois’ expensive workers' comp regime to create more jobs? Or with a plan to reduce the number of duplicative school districts to bring costs in line with what people can afford?

When all is quiet, the opposite is happening. The budgeteers are figuring out how to spend the $5 billion more they are now taxing you – and how to fund (or hide) any additional amounts they want to spend.

3. Go-along-to-get-along politics is back

Go-along-to-get-along politics over the last three decades has brought Illinois to the brink. Most of the mess has come when governors and the legislature agreed to compromise and work together. As Gov. Jim Edgar said of his own efforts at cooperation, he attempted to bring “civility, compromise, compassion.” Unfortunately, those three c’s have taken Illinois in the wrong direction.

It’s how Edgar got his failed and damaging pension ramp passed. It’s how Govs. Rod Blagojevich and Pat Quinn kicked-the-can with multi-billion dollar pension bonds. It’s also how, year after year, the Illinois legislature passes phony budgets that are always unbalanced. Quiet, maybe a little fuss, then agreement at the last minute. That’s how they like it.

Quiet negotiations today means that Rauner is no longer fighting back like he used to.

Maybe his political calculations tell him to go along to get along – that it might get him more votes. Or maybe, as cartoonist Eric Allie suggested in an older piece, Rauner is just the next Republican governor to capitulate.

This time last year, the opposing sides weren’t even talking to each other about the budget. Now, the secretive “budgeteer” meetings are reportedly going well. The rumor is the two groups are only off by less than $100 million.

If that’s all true – and we certainly haven’t heard much from the governor – then Rauner’s no longer fighting to partially roll back the tax hike as he recently promised. It seems, rather, that he’s now happy to use every penny and more of that $5 billion tax hike.

Nor is he fighting for major pension, labor or property tax reforms. At least none that he’s communicated openly.

4. These budgets are always phony anyway

Illinois has a balanced budget requirement. But you wouldn’t know it considering the state hasn’t had a truly balanced budget since 2001 and it ends up with billions in unpaid bills every single year.

It’s all a function of the games and accounting tricks lawmakers use every year to make things “work” on paper. From pensions, to Medicaid to unpaid bills, politicians move money around to make things balance one year, but end up building deficits for the next.

And how many budgets can the Illinois legislature balance with the same proceeds? Apparently, many.

Take, for example, the apparently eternal sale of the Thompson Center. Illinois’ last several budgets have included the same revenues – some $300 million – from selling off the building. Expect to see the Thompson center revenues featured again in the new budget.

They still haven’t sold the building.

No news and “healthy” negotiating don’t mean Madigan and his team won’t shove a 500-page budget down our throats with no time to read it.