Advocates for dissolving CARD looking for help in petition drive 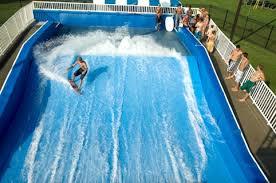 Had things gone as planned at the Collinsville Area Recreation District (CARD), cash flowing from the registers at a golf course and water park and back into the district’s general revenue fund might have served as a model for other communities.

But the combination of loose spending practices and lax oversight during previous administrations, and in-the-red operations at Splash City and Arlington Greens golf course over many years, led to a financial catastrophe that few park districts ever face – $23 million in debt.

In the last few years as CARD trustees have more responsibly managed operations, the call for dissolving the district has multiplied as being the best option for taxpayers.

According to CARD President Ron Jedda, district assets have already been divvied up to the satisfaction of communities whose tax dollars have supported CARD - Collinsville, Maryville, Glen Carbon and Pontoon Beach and Collinsville Township. With the exception of Collinsville Township, all have adopted resolutions for dissolving.

The City of Collinsville will retain most of the assets as they are located in city limits, including Splash City, Glidden Park, Morris Hills, Willoughby Farm, Schnucks Memorial Park and Woodland Park, as well as various equipment and vehicles. The Village of Maryville will retain Pleasant Ridge Park and some equipment as that park is located within the village.

Also, Arlington Greens has been leased for 30 years, with $1 per round going toward debt reduction.

The only things left to clean up are the whopping debt and a vote by the people to make dissolution official.

Derrick Cox, a Collinsville Township trustee residing in Maryville, is taking a lead in the dissolution effort by searching for volunteers to gather enough signatures for a November ballot referendum that will ask voters to officially disband. In order to get it on the ballot, 20 percent of the district's registered voters - or approximately 5,500 persons – must sign petitions by August. It will then take a 66 percent voter approval in the general election to dissolve the district.

Cox said that petitions are ready to go and his group of supporters needs help with distribution.

He said he’s looking to precinct committee men and women and local elected officials to walk neighborhoods to get signatures.

“This is a bi-partisan effort,” Cox said.

Cox and Jedda say that dissolving the district is in CARD taxpayers’ best interest because, while they still will be on the hook for paying off the accumulated $23 million in debt, their tax liability will be reduced because under dissolution they would not pay for CARD operations in addition to the debt.

Liability to each household or property owner will be based on assessed valuation, and, Jedda said, the amount of debt will not increase – it could decrease if the tax base increases.

“The actual tax rate to citizens could go down as assessed valuation increases…and the burden will be reduced,” Jedda said.

Cox, who resides in Maryville, said that as an example, his CARD tax liability would be reduced from $450 to approximately $250, the latter amount for debt reduction, under dissolution.

While there could be “small increases” in property or utility taxes in the future for Collinsville and Maryville, which have acquired CARD assets, Jedda said they “won’t be anywhere near payment to CARD.”

“The net impact is that it’s going to save money on their taxes,” he said.

On the other hand, if a vote to dissolve is ultimately unsuccessful, property owners within the district would continue to be taxed by CARD – and for those in Collinsville and Maryville they could potentially be double taxed as they operate parks acquired from CARD.

Compounding the problem would be the loss of grant money that some of the communities could seek from the county under the Park Enhancement Program (PEP) – funds that could help offset municipal park operations.

Jedda said that under the PEP program, the county distributes funds based on population, granting $5 per person living within a park district. Without dissolution, CARD would get the money, if dissolved the other entities could receive grants.

As for people living in the areas that did not retain any assets - Glen Carbon and Pontoon Beach and Collinsville Township, "They're just happy to get CARD to go away," Jedda said.

For Cox, his sentiments towards operation of CARD are similar to other taxpayers in the district, he believes.

Given the amount of taxes collected from his property to pay for CARD, “It’s just a shame that I don’t use Splash City and if I go to play golf, I don’t get a free round.

“I would go to parks in Collinsville, and there was trash overflowing from the cans and things were not maintained well. It's ridiculous.”

Cox sees the dissolution effort as a matter of urgency.

“There’s a new (CARD) board coming in next April (if not dissolved) and they could start doing whatever they want to do,” Cox said.

Anyone wishing to help distribute dissolution petitions can contact Cox at myvoicedkc@gmail.com.