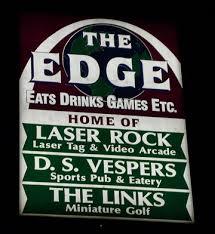 A pair of woman's dark brown shoes with two and a half inch chunk heels was on display at a personal injury trial that got under way this afternoon in St. Clair County.

Jurors must decide whether owners of The Edge in Belleville are responsible for the knee, leg and foot injuries suffered by the woman who wore those shoes while using a motorized rock-climbing simulator called the Fun Rock nearly 10 years ago.

April Kassebaum of Columbia claims she has incurred $73,932.62 so far in medical expenses that includes treatment of a broken knee cap and four surgeries. The incident happened at around midnight on March 18, 2006, while she was attending a birthday celebration.

One of the issues in dispute is the relevance of Kassebaum's admitted beer consumption before she lost her footing and jumped off the machine from approximately three feet onto a four-inch mat below.

Kassebaum's attorney Patrick Foley of Belleville said during opening arguments that she had a few beers before arriving at the The Edge and a few beers while she was there.

Foley said that evidence will show that defendant Dahm and Schell, doing business as The Edge, breached its duty to provide instructions in how to use the equipment as well as in having proper supervision of patrons.

When his client chose the shoes she wore before leaving home that day, she never thought she would be going rock climbing, Foley said.

'You're not going to hear April deny that...maybe if she had different shoes things might have been different," Foley said.

The rock climbing equipment in question is 11 feet, four inches high, by eight feet wide, and generally is used by two people competing against one another, according to statements at trial today. It operates as a large vertical conveyor belt with hand and footholds for climbing. As the user climbs, the conveyor rotates toward the user and the whole unit tilts at various angles in order to simulate the contours of a real mountain face.

Foley claims that instructions for using it, which included warnings about wearing appropriate shoes, were not prominently displayed.

He said that the defendant knew the risks of using the equipment, but that his client did not.

He told jurors that manager logs kept by the business to track "everything" that occurred on a regular basis between 2002-2007 were no longer available.

"They cannot be found," he said.

Foley also said that jurors would not be able to look at the piece of equipment in question because the defendant "destroyed" the evidence, when the business sold the Fun Rock for scrap for $300 in 2007.

Kassebaum's injury occurred close to midnight while she was using the Fun Rock with a friend.

According to testimony from plaintiff's witness Angel Tanase, Kassebaum's sister, the two had arrived at The Edge at around 10:30 p.m., having previously been at a St. Louis bowling alley for three hours.

Tanase said that she was acting as the designated driver that night.

Under cross examination by defense attorney John Cunningham of Belleville, Tanase was asked about how many beers in total Kasssebaum had consumed before she was on the rock climbing machine.

When asked by Cunningham whether Kassebaum had continued drinking a beer after she had fallen, Tanase said she did not remember.

Cunningham pointed to Tanase's deposition testimony in which she answered, "I believe so."

During his opening statements, Cunningham said the Fun Rock machine, which was purchased in 2001, was sold almost two years after the injury took place and more than a year after the lawsuit was filed because the business wanted to replace it with something else.

"You know how many incidents there were in that time?" Cunningham said. "None. All the uses and all those years and not one."

He said that Kassebaum did not report the incident to management, and that his client did not know about the incident until three months later when a lawyer contacted the business. He said that at that point, surveillance tape had already been taped over.

Cunningham also disputed the importance of the manager's logs, saying they would not have contained information relating to incidents such as an injury. He said the logs went missing during an office reorganization.

After Kassebaum's fall, she was carried to Tanase's vehicle because she could not put pressure on her left leg, according to testimony. Tanase drove Kassebaum to St. Elizabeth's Hospital.

Foley said his client was hospitalized from March 19 through March 24.

He said she is a candidate for a full knee replacement in the future, but she will want to wait until she is older because replacements tend to wear down.

Testimony will resume at 9 a.m. Tuesday.