People are mad at government, local leader says; Property tax is one of the reasons 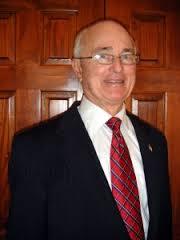 They're mad at Congress and they're mad at their state government, according to St. Clair County Board member John West, a Republican who represents a portion of O'Fallon, in District 15.

West has served on the county board since 2009, and was a city councilman before then. He has long been a familiar face to city residents, walking neighborhoods even when it's not election season to hear what's on the minds of his constituents.

He's been at it again lately, knocking on doors of "hard" Republicans - ones who have voted one or more times in recent primary elections. He said he would be canvassing his Independent and Democrat constituents again in March to hear what they have to say.

"Republicans are so mad," he said. "I've never seen them so upset - at Congress, at the State."

One of the things folks are mad about is property tax, and the significant burden local taxpayers bear, he said. While the state is supposed to fund 50 percent of school operations, the high school in West's district - #203, gets just 24 percent and grade school #90, gets 32 percent from Springfield.

Any taxpayer's bill in Illinois will show that amounts going to their local school districts represent the lion's share of their liability.

"Illinois is in such a mess," West said. "We are the highest taxed state, except maybe, New Jersey."

One of the constituent services he provides is helping people appeal property tax assessments and hopefully getting them lowered.

He said he has helped dozens of people over the years.

But he acknowledged that lowering individual tax bills isn't a long term solution, because burdens just get shifted to other property owners.

"My tax bill keeps going up," he said.

West said that long-term solutions to the state's fiscal woes would have to include fixing underfunded public pensions - teachers and state workers, for instance. But, right now it is Illinois property owners who are saddled with high taxes.

He said he is supportive of Gov. Bruce Rauner's plan to freeze property tax rates - one of a handful of issues that are sticking points in lawmakers reaching a budget agreement. The state has been operating without a budget since the fiscal year began July 1. Democrat lawmakers have resisted Rauner's "Turnaround Agenda" that also includes reforms to workers' compensation, civil justice, public pension and other systems.