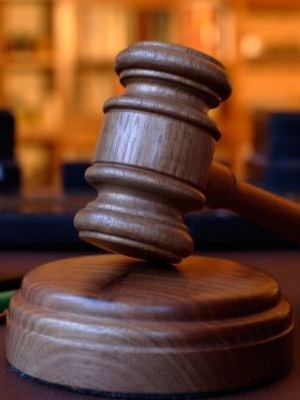 A Chicago attorney who made millions pursuing copyright and computer hacking litigation on behalf of businesses purporting to hold the rights to pornographic videos is being accused of carrying out a shakedown scheme in courts around the country - as well as right here in St. Clair County.

The ARDC, as other courts have, accuses Steele of identity theft, suing under the names of fictional entitites, discovery abuses and other acts of contempt and deception.

Duffy died of heart- and alcohol-related conditions on Aug. 10, a date by which he and Steele had been ordered to pay a discovery obstruction sanction in federal court in East St. Louis.

According to ARDC Administrator Jerome Larkin, between 2010 and 2012, Steele and Duffy represented business entities which produced pornographic movies and videos in copyright infringement matters. These entities were limited liability companies organized in St. Kitts and Nevis, West Indies, which have laws preventing the recording or disclosure of corporate ownership information.

The ARDC complaint states that there have been attempts to learn corporate ownership, but that Steele and Duffy "always resisted those attempts and to this date, the ownership of the LLCs is unknown to the courts."

It further states that between September 2010 and February 2012, Steele and Duffy filed 118 copyright infringement actions in various United States federal district courts on behalf of pornographers and against 15,878 John Doe defendants.

The lawyers communicated with John Does by letter and phone calls, demanding between $2,500 and $4,000 in exchange for not revealing their identities in public litigation.

The ARDC refers to the correspondence as "settlement shakedown" letters.

At the time letters were sent, Steele did not know the identity of the individual who had actually downloaded the pornographic work at issue, had not taken steps to determine who had "illegally" downloaded the copyrighted content, and did not have a reasonable basis to believe that the recipient of the letter was an actual "infringer," the complaint states.

"As of October 2012, Respondent Steele and Paul Duffy had settled approximately 5,000 copyright infringement matters, and recovered millions of dollars in settlement funds," the complaint states.

The lawyers have done business under various names. Steele had created Steele Hansmeier in 2010. Hansmeier also created Alpha Law Firm in Minneapolis in 2010, in which Steele appeared in some copyright matters. In 2011, Steele and Duffy created Prenda Law as successor to Steele Hansmeier.

In 2012, Steele and Duffy created The Anti-Piracy Group as a successor to Prenda Law because it was "receiving negative publicity," according to the complaint. Prenda Law dissolved in 2013 amidst court sanctions against the firm and its lawyers.

A summary of the charges against Steele are as follows:

Steele is accused of misappropriating the name of the caretaker of his vacation home - Alan Cooper - as being the principal owner of Ingenuity 13 and AF Holdings - businesses that were registered in Saint Kitts and Nevis, West Indies.

U.S. Distriict Judge Otis Wright, who received by transfer all of the Prenda cases, vacated earlier orders that allowed Steele and Duffy to issue subpoenas and take discovery. The lawyers attempted, but failed, to have Wright disqualified.

Wright issued an order to show cause to address Steele and Duffy's lack of reasonable investigation of copyright infringement activity, as well as their attempts to defraud the court by using a stolen identity.

They did not show up for a hearing.

At a subsequent sanctions hearing, Steele and Duffy invoked their right to remain silent under the Fifth Amendment. They were later sanctioned by Wright in the amount of $81,319.72 for "brazen misconduct and relentless fraud."

They appealed to the U.S. Court of Appeals for the Ninth Circuit, and the matter remains pending.

A court in Hennepin County, Minn. entered judgment in favor of Cooper over the theft of his identity, ordering Prenda Law to pay $5,000 as damages for humiliation and $250,000 as punitive damages.

The order stated: "Attorneys have a special obligation not to use another person’s name without their explicit permission. If such permission had been given, Prenda as a law office could have and should have gotten that permission in writing. It is also obvious that Prenda undertook this deception to avoid naming its principles as the driving force of this scheme. Cooper was a straw man put up to protect them from obvious ethical violations of creating litigation. Although the court is uncertain about the exact gains that Prenda reaped from this enterprise, it has no doubt that substantial gains were made. The gains were sufficiently tempting that Prenda was willing to overlook what it considered minimal risk. Punitive damages are critical in situations like this where money damages does not adequately encompass the wrong done in stealing a person’s name for one’s own benefit. Punitive damages must be sufficient to deter similar abuses of professional integrity. The court finds that $250,000 in punitive is appropriate and necessary to act as stern warning not to engage in this type of conduct."

Count 3: Bad faith litigation and improper use of the judicial system in Guava v. Spencer Merkel

Shakedown letter recipient Spencer Merkel of Beaverton, Ore., who called Prenda Law to say that he could not afford its $3,400 demand, agreed to be sued in exchange for: providing his BitTorrent computer log under the pretext of corroborating the firm's evidence of his IP address. The agreement held that upon receipt of the log, Prenda would dismiss the lawsuit against Merkel. Prenda would also recommend a pro bono attorney in Minnesota where the case would be filed.

Attempts at discovery proceeded against Internet service providers and John Does, but they fought back.

The Minnesota court ultimately concluded: "With no good faith pursuit against Merkel in this case, the Court is left only with Guava’s attempts to harass and burden Non-Parties through obtaining IP addresses to pursue possible settlement rather than proceed with potentially embarrassing litigation regarding downloading pornographic movies."

The judge found that Steele and Duffy acted in bad faith to the non-party John Does, non-party ISPs and their counsel, and found them jointly and severally liable in the total amount of $63,367.52.

Steele and Duffy appealed, but an appeals court upheld the lower court's findings.

In Lightspeed, Steele, among other things, is accused of filing a suit for the improper purpose of using discovery to obtain the names of Internet subscribers from whom settlements could be exacted.

The case, which alleged hacking of pornographic movies, was originally filed in St. Clair County. Circuit Judge Andrew Gleeson granted an ex parte motion for leave to obtain discovery by subpoena from Internet service providers who were not parties to the lawsuit.

Later, when it was removed to federal court, Steele and Duffy sought the personally identifiable information from 6,600 alleged co-conspirators of defendant Anthony Smith of Collinsville.

Smith, who had been replaced with John Doe as defendant, did not respond to the demand letters sent by Prenda.

In the meantime, Steele and Duffy were under orders by Judge Wright to explain why they filed suit without reasonable investigation and defrauded the court by asserting a copyright assignment secured with a stolen identity.

Steele and Duffy voluntarily dismissed the Lightspeed case because Steele "did not want his litigation strategy to come under scrutiny by the federal court in Illinois," the ARDC alleges.

Smith and the ISPs sought fees and costs.

Murphy found that Steele and Duffy were engaged in "abusive litigation..simply filing a lawsuit to do discovery to find out if you can sue somebody. That's just utter nonsense."

They were sanctioned $261,052.11; they failed to pay and later claimed an inability to pay.

Attached to Steele's and Duffy’s statements was a letter from Steele’s certified public accountant stating that Steele had "elected to omit substantially all of the disclosures required by generally accepted accounting principles."

On March 24, 2014, District Judge David Herndon, who was subsequently assigned to the case, entered an order granting the defendants’ motion for contempt. In his order, Herndon found that Steele and Duffy had willfully violated the sanctions order and made no effort to comply. Herndon found they provided "half-truths" at a show-cause hearing, showing clear disrespect for the court. He sanctioned them in the amount of 10 percent of the original sanction and ordered the sum to be divided equally among them, and also set up a schedule of additional fines if they did not pay.

Smith's attorneys sought to discover Steele's financial records since he had pleaded an inability to pay.

Herndon denied Steele's motion to quash subpoenas, but Steele nonetheless directed Duffy to send a file-stamped copy of the motion to "mislead" officials at JP Morgan into believing that they did not have to respond to the subpoena, the ARDC says.

Steele also sent an email to bank officials at Sabadell United Bank informing them that there was a stay in place in the case.

When records showed that Steele had deposited $300,000 into a new bank account at Sabadell, Herndon in June ordered Steele and Duffy to pay a sanction of $94,343.51 for obstructing discovery by Aug. 10 - the day Duffy died.

Shakedown letters were sent; an John Does subsequently objected to their identities being disclosed.

Following a hearing, Gleeson entered an order stating, "All Doe objections to the disclosure of identifying information are overruled and denied." Gleeson also allowed Guava’s motion to strike Does’ petition for rule to show cause.

John Does appealed and prevailed.

The Fifth District found that Gleeson erred in granting Guava’s request for discovery before filing suit, since the petition failed to allege sufficient facts to support a cause of action against the persons the petition sought to identify. It further held that the trial court erred in denying the petition of the "John Doe" Internet subscribers, who were identified only by an IP address, which sought a rule to show cause and sanctions against Guava, especially when the underlying question in the matter was whether Guava intended to state a cause of action against the subscribers, or was actually seeking to harass or extort the subscribers without forming a reasonable basis for believing that they were culpable parties.

The Fifth District directed the trial court on remand to dismiss the petition for discovery before suit and to conduct an evidentiary hearing on the petition for rule to show cause, and adjudicate the merits of the Doe appellants’ allegations of false and frivolous pleading, harassment, extortion, identity theft and forgery.

In 2013, Steele and Duffy filed a libel suit in St. Clair County against Alan Cooper, his attorney Paul Godfread and John Does, over the defendants' claims that Prenda Law stole Cooper's identity.

The case was removed to federal court in East St. Louis; Judge Herndon then transferred the case to the Northern District of Illinois, noting that a "virtually identical" case was pending there.

Attempts at remading the matters to state court were denied by District Judge Darrah, who also sanctioned Prenda attorneys for those attempts, saying they were "unreasonable and vexatious."

Prenda Law and Duffy were sanctioned $11,758.20, which has gone unpaid as of the date the ARDC panel voted to file its complaint against Steele.