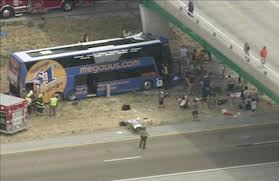 Bridgestone America’s Tire Operations (BATO) is asking that a lawsuit filed over a fatal Megabus crash last year be transferred to Montgomery County based on the forum non conveniens doctrine.

The lawsuit filed in May in St. Clair County by Maurine Stellhorn and Francisco Miranda claims that the tires on the bus had inadequate bonding, inadequate belt edge protection, a propensity for tread separation, lacked adequate warnings, were improperly tested and were prone to an unreasonable risk of puncture and deflation.

According to the complaint, the plaintiffs were riding in a 2011 Van Hool double-decker bus on Aug. 2, 2012, southbound on I-55 near mile marker 57. The bus allegedly left the road and collided with a concrete bridge support pillar after experiencing an unexpected front tire blowout while traveling along the interstate.

According to media reports, defendant Preston L. Taylor, who was driving the bus, was a 25-year-old rookie whose trainer had accompanied him on the route.

Bridgestone filed its motion to transfer on Oct. 21, which was taken under advisement by Circuit Judge Vincent Lopinot.

“Pursuant to the doctrine of forum non conveniens, this court should transfer this case to the Circuit Court of Montgomery County, Illinois because St. Clair County is an inconvenient forum with no practical connection to this case,” the motion states.

The forum non conveniens doctrine allows the court to transfer a case to a jurisdiction that is more convenient for the parties and witnesses when appropriate.

BATO argues that the litigation has “no connection whatsoever” to St. Clair County, because the incident occurred in Montgomery County and nearly all of the witnesses reside in Montgomery County. Therefore, transferring the case would be less costly and easier, it says.

“As such, it is clear that, by filing this case in St. Clair County, plaintiffs have engaged in forum shopping,” the motion states.

Lopinot gave the plaintiffs until Nov. 29 to reply to BATO’s motion to transfer and BATO was given until Dec. 13 to respond to the plaintiffs’ answer.

Coach Leasing is also named a defendant in the case because it owned the leased bus at the time of the accident.

Kevin A. Sullivan of Sauter Sullivan LLC in St. Louis represents the plaintiffs.

Want to get notified whenever we write about Holland & Knight ?

Sign-up Next time we write about Holland & Knight, we'll email you a link to the story. You may edit your settings or unsubscribe at any time.