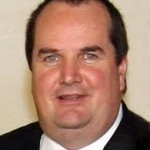 Agents arrested Cook on May 22, at McGilvery’s home on South 35th Street.

The late Judge Joe Christ, who on his last day as a county prosecutor dropped charges that McGilvery drove without license or registration, died of cocaine intoxification 12 days later at a Cook family lodge in Pike County. Blame for his death rests on cocaine, not heroin, but the scandal involves both.

McGilvery and two others supplied the heroin while county probation officer James Fogarty supplied the cocaine, according to U.S. Attorney Steve Wigginton.

Christ’s death and Cook’s arrest stirred so much suspicion that State’s Attorney Brendan Kelly implemented random drug tests of his prosecutors. He said on June 5 that 95 percent of persons in his office have already been tested and that none tested positive.

McGilvery, now 34, first found trouble with the law when he paid $25 on a Belleville ordinance complaint at age 15. Between 1994 and Feb. 11, McGilvery was charged with dozens more offenses – two felonies, four misdemeanors and 41 mostly traffic citations.

He first retained Cook to represent him in 2001 on charges he faced from Swansea police who ticketed him for following too close and driving without insurance. McGilvery would again be represented by Cook between 2002 and 2006 in eight stops in Belleville, Fairview Heights and East St. Louis. One of those arrests was for possession of cannabis, the others for traffic offenses.

McGilvery lost his lawyer in 2007 when Cook took on a judge’s robe.

Without a lawyer, McGilvery paid $90 on a ticket for exceeding the limit by 21 to 25 miles an hour in Alorton.

When Belleville police wrote him a windshield obstruction ticket in April 2007, his former counsel Cook took the case and set it for bench trial. The next docket entry from July 2007 shows Judge Heinz Rudolf imposing a $75 fine. A month later, Rudolf vacated McGilvery’s conviction and set a bench trial.

He continued the trial twice but never held it, and Cook dismissed the ticket on the state’s motion in January 2008.

After Centerville police ticketed McGilvery for exceeding the limit by 11 to 14 miles an hour in January 2008, Judge Richard Aguirre fined him $75. Judge Randall Kelley set aside the conviction as “ex parte,” meaning Aguirre entered it without both sides present, and Kelley hiked the fine to $125 in April 2008.

In 2009, Wigginton alleges, McGilvery joined a conspiracy to sell heroin with Deborah Perkins and her son Douglas Oliver, who lived on Kassing Drive near Fairview Heights.

He would eventually deal in thousands of dollars a week, according to federal agents.

In the meantime, McGilvery’s driving habits didn’t improve, as he picked up an insurance ticket in Fairview Heights on July 2, 2009, and another in New Athens two weeks later. Judge Brian Babka dismissed both tickets with leave to reinstate, and no one reinstated them.

Kelley dismissed with leave to reinstate a ticket that state police handed McGilvery on July 27, 2009, for turning left against oncoming traffic, and no one reinstated it.

McGilvery hired Gregory Skinner and Matthew Marison to defend him, and they negotiated a peculiar plan.

McGilvery would plead guilty of improper lane use and pay a whopping $2,000. The state would drop the misdemeanor charge and the other four tickets. Judge Julie Katz accepted the plea on May 26, 2011.

Six months later, after an accident on West Main, Belleville police charged McGilvery with failure to reduce speed and driving on a suspended license.

His troubles multiplied three weeks later, when State’s Attorney Kelly charged him with felony possession of a controlled substance.

McGilvery hired Charles Baricevic, son of Chief Judge John Baricevic, to defend him, and they entered his plea of not guilty.

McGilvery on his own then negotiated to pay $150 for failure to reduce speed on West Main, with Katz dismissing the license charge.

In March 2012, 30 year old Jessica Williams died of a heroin overdose in the house on Kassing Drive.

Perkins and Oliver allegedly removed her body and dumped it on a wooded lot in East St. Louis, where someone found it on March 19.

Judge Milton Wharton set an April 18 bench trial for McGilvery, but on that date he instead entered a “drug school order” directing McGilvery to the county drug abuse program.

Wharton wrote that the charge would be dismissed when the program was complete. An order followed on May 29, but Cook signed it rather than Wharton.

Cook found “successful completion” by McGilvery, and he dismissed the charge.

Christ initialed the order for the state, and Charles Baricevic initialed it for McGilvery.

Chief Judge Baricevic handled preliminary orders in the case of Perkins and Oliver, and then he assigned Judge Jan Fiss to the case.

Lawyers for Perkins and Oliver moved for substitution, claiming Fiss was so prejudiced against them that they could not receive a fair trial.

Fiss granted the motion, and Baricevic assigned the case to Cook.

At some point, the commotion captured Wigginton’s attention.

On Jan. 18, 2013, according to drug agent Neal Rohlfing, Perkins traveled to Chicago.

Wigginton filed charges that they possessed heroin with intent to distribute it, and he secured indictments from a grand jury on Feb. 5.

Fairview Heights petitioned the next day for authority to secure and enclose the house on Kassing Drive and prevent occupancy, crime or nuisance.

On Feb. 11, Judge Robert Haida granted a preliminary injunction declaring that no one but law enforcement could enter the property.

That same day, a deputy sheriff arrested McGilvery on charges that his license and his registration had expired.

Cook covered for him one last time.

On Feb. 26, Cook signed an order that, “Defendant is in compliance with both tickets.”

“On motion of the state above cause shall be dismissed with leave to reinstate. Cancel pending court dates,” Cook wrote.

Christ, on his final day as prosecutor before taking a judge's oath, initialed the order.

Baricevic attributed his death to natural causes, and U.S. Senator Dick Durbin repeated that line in a tribute on the Senate floor.

On May 24, assistant U. S. attorney James Porter charged Cook as an unlawful user of a controlled substance in possession of firearms and heroin.

Porter wrote that Cook was addicted to a controlled substance. He charged McGilvery as conspirator with Perkins and Oliver in heroin distribution.

He wrote that according to a confidential source, McGilvery received $2,500 to $5,000 worth of heroin every two weeks.

According to Federal Bureau of Investigation agent Joseph Murphy, Fogarty said he and Christ used cocaine on weekends. Murphy wrote that Fogarty said Cook and Christ bought cocaine from him.

He wrote that Cook used cocaine at his home 10 times and when they golfed.

“Fogarty remembered hoping it wasn’t an overdose when he heard Christ had died,” Murphy wrote.

McGilvery pleaded poverty, with little income and few assets, and the court assigned public defender Rodney Holmes of St. Louis to him.

James Gomric of St. Louis represents Perkins on the St. Clair County case, and Todd Schultz on the federal case.

Justin Kuehn represents Oliver on the St. Clair County case, and John Stobbs of Alton represents him on the federal case.

Steve Korris is a freelance reporter.