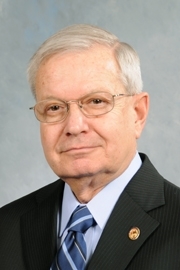 The so-called “pro-growth jobs” package calls for major reform to the Civil Code of Procedure’s provisions on premises, product and joint and several liability, as well changes to the state’s workers’ compensation and tax systems and easing regulations on businesses.

Kay discussed the proposals at a news conference Monday in Springfield, where he was joined by House Minority Leader Tom Cross, R-Oswego, fellow members of the House GOP and state business leaders.

“The state needs to create and attract jobs. It is necessary to see growth at three to four percent annually and this pro-growth jobs package will get the job done,” Kay said in a statement. “This will not happen until the state meets its obligations by improving the tax and regulatory climate in order for business to prosper.”

Kay said by phone after Monday’s press conference that while tort reform is “one of the biggest obstacles the state of Illinois faces,” it plays an important role in attracting and retaining businesses.

Certain laws within the state’s Civil Code of Procedure, Kay said, “don’t appeal to businesses because they are just not fair. We wonder why we don’t attract businesses and it’s because our courts in Illinois tend to hold people captive for no good reason.”

Referring to Madison, St. Clair and Cook counties’ reputation as so-called judicial hell holes, Kay said his legislative package includes more than a handful of proposals to reform “a number of the real erroneous public acts out there today that allow lawyers to control the courts.”

Under these bills, a defendant shall be jointly and severally liable for all other damages if that defendant’s fault is 25 percent or more than the total fault attributable to the plaintiff, the defendants sued by the plaintiff and any third party defendant who could have been sued.

His measure, Senate Bill 1414, would delete language in the Code of Civil Procedure that requires courts to instruct the jury that the defendant should be found not liable if it finds the contributory fault of the plaintiff is more than 50 percent of the proximate cause of the injury.

It would also change language to provide that a defendant is severally liable for non-medical damages when the defendant is found less than 25 percent of the proximate cause, rather than to the total fault attributable to the plaintiff, the defendants sued by the plaintiff and any third party defendant who could have been sued.

Kay said when it comes joint and several liability, Illinois’ current system “says that anybody that is left at the table,” regardless of their fault compared to defendants that may have settled or been dismissed, is stuck “picking up the tab for everybody.”

As part of his jobs package, Kay also introduced House Bill 2221, which would provide limits on a non-expert’s opinion or testimony.

Kay said while standards for expert testimony “may seem like a small matter, when it comes to evidence, it’s actually a pretty big deal.”

In addition, Kay has also introduced House Bill 153 in an attempt to prevent “double dipping” by asbestos claimants seeking compensation from bankrupt companies and the court.

This measure, he said, is modeled after recently-passed legislation in Ohio, where claimants will now have to reveal all asbestos claims filed by them or for them within 30 days of the commencement of discovery in a suit.

Besides these Code of Civil Procedure-related bills, Kay’s jobs package includes legislation aimed at reforming the workers’ comp and tax systems, as well as easing regulations on businesses.

Some of his workers’ comp measures propose minor changes while others intend to do much more, like House Bill 107, which would create a “primary causation standard” in order to qualify for benefits.

The language of Kay's bills and more information about the jobs package can be found at ilga.gov and kay.ilhousegop.org.