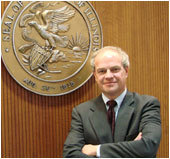 The daughter of a recently deceased man claims her father died a painful death after doctors at a rehabilitation center failed to properly treat him.

Becky Evans and Jason Laut, as co-administrators of the Estate of Daniel Lugge, deceased, filed a lawsuit June 23 in the St. Clair County Circuit Court against Belleville Healthcare and Rehabilitation Center Inc.

In their complaint, Evans and Laut allege Lugge was admitted to St. Elizabeth’s Hospital on Feb. 24, 2013, for a brain-related accident. He was subsequently discharged from the hospital and placed in Belleville Healthcare and Rehabilitation Center, where he required supervision and assistance with his daily living due to his injuries, according to the complaint.

While he was in the rehab facility, Lugge lost 40 pounds and was readmitted to the hospital on March 17, 2013, because of a pressure ulcer, the suit states. When doctors examined Lugge at the hospital, they discovered he was also suffering from renal failure, multisystem organ failure and septic shock, the complaint says.

Lugge was discharged from the hospital on March 18, 2013, and admitted to Hospice of Southern Illinois where he died March 19, 2013, Evans and Laut claim.

Because of his treatment at the rehabilitation facility, Lugge experienced severe pain and suffering before his death and endured disability, according to the complaint. He also lost his normal life, suffered disfigurement, endured mental anguish and emotional distress and incurred medical costs, the suit states.

Evans and Laut blame employees at the rehab center for contributing to Lugge’s death, saying staff negligently allowed him to develop pressure ulcers, failed to formulate an appropriate plan of treatment and care, failed to timely notify his physician of significant changes and failed to follow its policies and procedures to treat a pressure ulcer, the complaint says.

Evans and Laut seek a judgment of more than $150,000, plus attorney’s fees and costs.