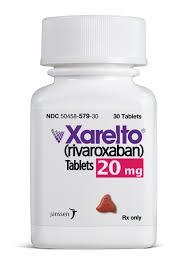 Numerous Xarelto users from several states are suing the makers of the drug that they say is fraudulently marketed and lacking the proper warnings.

Each plaintiff, from a range of states, is suing the defendants, which bring to market a medication known as Xarelto, for selling a product the lawsuit describes as "defectively designed, inadequately tested, dangerous to human health and lacked proper warnings as to the dangers associated with its use."

The drug, launched in 2011, is sold as a "safe and effective treatment to reduce the risk of stroke and systemic embolism in patients with non-valvular atrial fibrillation to treat DVT and PE, to reduce the risk of recurrence of DVT and/or PE, and for prophylaxis of DVT for patients undergoing hip and knee replacement surgery," the lawsuit states.

After spending about $11 million in 2013 alone to advertise and otherwise promote Xarelto, the defendants received world sales that went from $582 million in its first full year of sales to break the $1 billion mark the next year. The following year, sales totaled $2 billion.