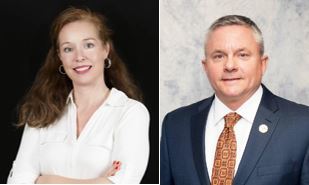 After she was forced out of an executive session during last week’s finance committee meeting, Madison County Recorder Amy Meyer said board committees have been overusing closed sessions out of fear of litigation.

Meyer said Madison County government has been run in secrecy lately as various committees call executive sessions that are closed to the public on a regular basis.

“They call executive sessions all the time,” she said.

She explained that executive sessions are intended for those with executive power, including board members and elected officials, to discuss personnel issues involving confidential information.

However, the executive session called Feb. 12 at the finance committee meeting involved a discussion on IT Director Rob Dorman’s request for attorney’s fees following a corruption investigation that was recently dismissed.

Dorman retained outside counsel during the investigation and was represented by Alton attorney Ed Moorman. Dorman seeks attorney fees totaling $19,812.50.

Meyer pointed out that even Dorman objected to the executive session.

“This whole raid has been cloaked in secrecy and the public has a right to know what’s going on and I’d hope that you ask the questions to find out why taxpayer money was spent on a raid and you do it in the open and perform open and honest government,” Dorman said during the meeting.

When the meeting began, Committee Chair Don Moore said he saw no reason to go into executive session. It wasn’t until Assistant State’s Attorney Jeff Ezra suggested they discuss the issue in closed session because “it’s the state’s attorney’s position that if you pay a dime on this, you may be committing official misconduct,” that Moore agreed to err on the side of caution.

Moore asked anyone who is not on the finance committee meeting to step out for the executive session, but Meyer refused to leave.

Meyer added that she wasn’t planning on attending the meeting but had some time in her schedule and decided to sit in on the discussion out of curiosity. She sat in the back and didn’t think she was required to leave when they closed the meeting to the public.

“This is not political,” she said. “I just want to see that things are run right.”

She said a sheriff’s deputy was asked to escort her out, which she said is an assault. She explained that it is an assault to force someone to leave without the authority to do so.

Meyer said she asked Moore what the legality is in who is and is not allowed in an executive session. She said he was not sure. She then turned to Ezra, who also said he didn’t know.

"It was an abuse of power," she said.

Meyer said committees shouldn’t be calling executive sessions if they don’t have an understanding of when it is and isn’t appropriate.

“It’s like playing with a loaded gun that you don’t know how to use,” she said.

Meyer said that while the legality of forcing an elected official to leave executive session is questionable, all board members do have executive privilege and cannot be barred.

She explained that board members Phil Chapman and Matt King were also asked to leave.

Ultimately, a committee member said they decided to "table" the discussion until the March finance committee meeting, unless a special meeting is called.

Meyer added that while everyone except finance committee members were asked to leave, Moorman was present in the room during the duration of the closed session.

She pointed out that Moorman is neither a board member nor an elected official and has no executive privilege.