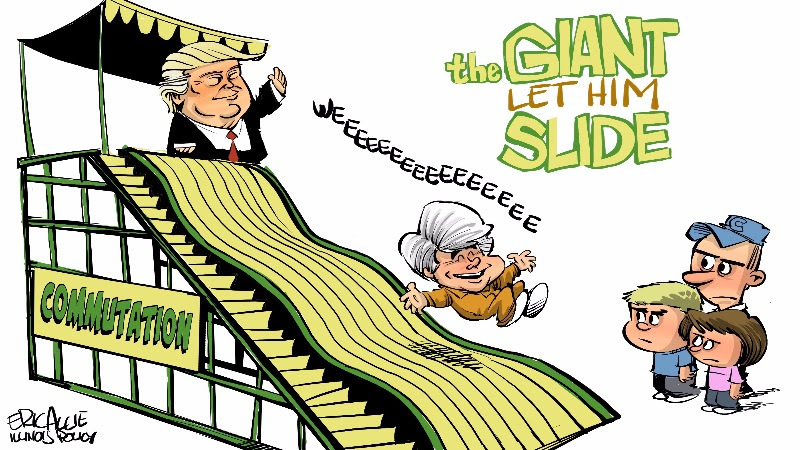 “We have commuted the sentence of Rod Blagojevich,” Trump said.

“He’ll be able to go back home with his family after serving eight years in jail. That was a tremendously powerful, ridiculous sentence in my opinion. And in the opinion of many others.”

The former governor will be released four years ahead of schedule. He originally received a 14-year prison sentence after being found guilty on 18 felony charges, including wire fraud, extortion, bribery and conspiracy.

The former governor was charged with attempting to sell Barack Obama’s vacated U.S. Senate seat, as well as extorting the CEO of a children’s hospital and owners of a racetrack.

Trump has indicated for more than a year that he was strongly considering commuting Blagojevich’s prison sentence, previously calling it “excessive” and “really unfair.”

Blagojevich had exhausted all judicial appeals after the Supreme Court declined to hear his case in April 2018. Unlike a presidential pardon, Trump’s commutation means Blagojevich’s record will not be wiped clean.

“Illinoisans have endured far too much corruption,” the statement read, “and we must send a message to politicians that corrupt practices will no longer be tolerated.”

“President Trump has abused his pardon power in inexplicable ways to reward his friends and condone corruption, and I deeply believe this pardon sends the wrong message at the wrong time.”

Pritzker told Blagojevich he was "really not that interested" in Obama’s U.S. Senate seat. Rather, he was interested in being appointed Illinois treasurer.

"Ooh, interesting," Blagojevich said during the November 2008 phone call. "Let's think about that. You interested in that?"

"Yeah," Pritzker responded, "that's the one I would want."

Blagojevich later asked Pritzker for a campaign contribution as they discussed the possible appointment. From 2002 to 2006, Pritzker and his wife donated at least $140,000 to Blagojevich's campaign, according to the Chicago Tribune.

On another recording, Pritzker suggested to Blagojevich that he appoint Illinois Secretary of State Jesse White to the empty Senate seat.

“Of all the African-Americans that I can think that are sort of like qualified ... and people will say ‘Oh — that’s, you know that’s, that’s a pretty good pick,’ the one that’s least offensive and maybe gets you the most because it gets you that secretary of state appointment is Jesse White,” Pritzker said.

Pritzker later apologized for those comments, which were criticized as racially insensitive.

In addition to the wiretapped conversations, Pritzker elicited comparisons to Blagojevich in the wake of a 2019 report from WBEZ, which found Pritzker, his wife and brother-in-law are the subject of a federal criminal investigation arising from property tax breaks on a Pritzker mansion in Chicago’s Gold Coast neighborhood.

Investigators at ABC 7 Chicago found Illinois has seen 891 federal corruption convictions since 2000, more than any other state in the nation. And the Illinois Policy Institute’s corruption tracker shows that in the last year alone, a wide-ranging federal investigation has resulted in more than 30 Illinois lawmakers, businesses or political figures questioned, investigated, indicted or convicted on corruption charges.

One critical section of the report included proposals to address “structural problems” that lead to corruption and inefficiency in Illinois state government. The report recommended three structural changes: pass nonpartisan legislative maps, install term limits for legislative leaders, and make changes to the House and Senate rules curbing the power of leadership.

A decade later, the Illinois House of Representatives, led by the longest-serving speaker in U.S. history, has not adopted any of those reform recommendations.

In addition to structural reforms, a number of good-government bills have popped up in the Illinois General Assembly in response to the sweeping federal corruption investigation:

Polling released this month, commissioned by the Illinois Education Association, shows that cleaning up corruption is important to Illinois voters.

Respondents were asked how important an issue was to them on a scale of 0-10, where 0 means not a priority at all and 10 means it is a top priority. More than two-thirds of respondents, 69%, “ranked cleaning up corruption in state government” as a perfect 10, with 85% ranking it as an eight, nine or 10.

Those were higher marks than “having high quality public schools,” “reducing crime,” “balancing the state budget” and “lowering taxes.”