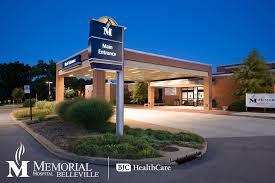 BELLEVILLE - A hospital, physicians and nurses face a lawsuit over claims that the defendants failed to regulate the blood sugar level of a patient who died some months later.

Vontesha Jones filed suit Dec. 6 as independent administrator of the estate of 25-year-old Kia Herron, who died on Dec. 18, 2017.

Memorial Hospital's parent company, BJC Healthcare, has previously told the Record: "Our policy is not to comment on pending litigation."

The court is also asked to order others who may be "aware of information essential to the determination of who should properly be named as additional defendants" to be named for discovery purposes.

According to the suit, Herron, who suffered from end stage renal failure, was admitted to Memorial Hospital in early December 2017, ahead of a procedure to insert an AV graft, which is an artificial tube inserted underneath the skin, and dialysis treatment.

It is claimed that over the course of a number of days, before and after treatment, mistakes were made over the amount of insulin provided to Herron, who then suffered repeated bouts of hypoglycemia, or low blood sugar levels.

The suit alleges negligence under the survival provisions of Illinois statutes, that is a claim could have been taken by the deceased had she survived, and wrongful death.

"As a direct and proximate result of one or more....negligent acts and/or omissions, Kia sustained serious injuries including, but not limited to, a poor quality of life, a deterioration of her overall physical, mental, and psycho social well-being" the suit says. Further, there was "a loss of dignity and respect, respiratory failure and cardiac arrest as a result of severe, recurrent episodes of hypoglycemia, all of which she suffered up until her death."

The plaintiff is represented by John J. Perconti and Andrew J. Thut of Levi and Perconti in Chicago.