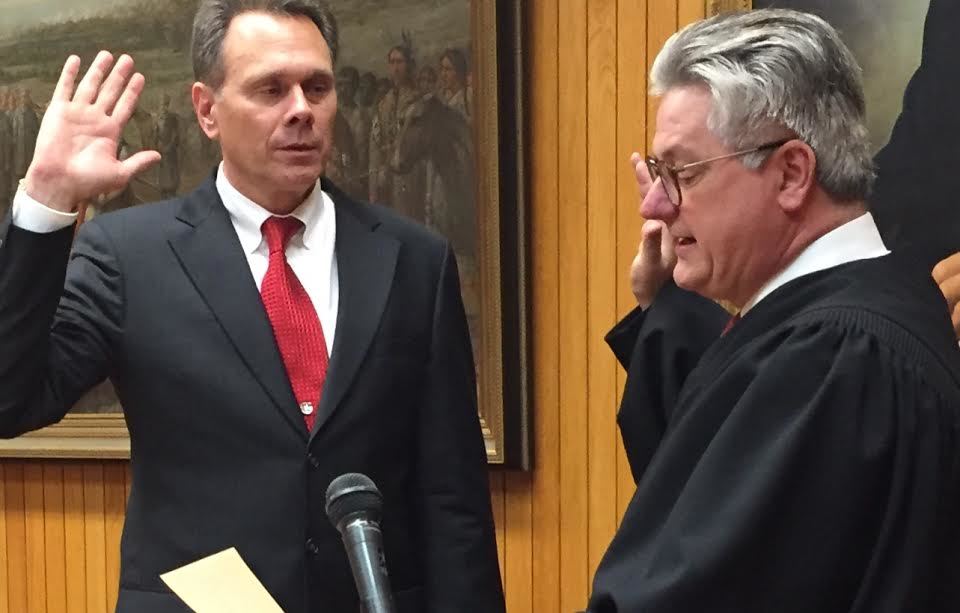 He found federal claims failed because no one deprived Duebbert of liberty.

He wrote that Duebbert’s claims under state law likely would have accrued on July 6, 2018, when criminal charges against him were dismissed.

“Accordingly, the plaintiff’s claims would not be time barred,” he wrote.

Also named in the suit were Carlos Rodriguez of Belleville and lawyer Alex Enyart, alleging that Rodriguez signed a false affidavit while Enyart represented him.

He also sued Belleville, St. Clair County, the state, and the State’s Attorneys’ Appellate Prosecutor, employer of Robinson and Lamken-Finnell.

The lawsuit claimed they all fabricated evidence to bring sexual abuse charges against him, and they allegedly withheld evidence tending to establish innocence.

Defendants moved to dismiss the complaint, claiming the Eleventh Amendment to the U.S. Constitution bars claims against states in federal courts.

He found enough to fill 35 pages, starting with Duebbert’s election in 2016.

“Plaintiff alleges many people in St. Clair County were not happy that he defeated the incumbent Chief Judge Baricevic,” Mills wrote.

“Those upset with this development included politically powerful persons who engaged in concerted efforts to find any way to keep plaintiff from becoming a circuit judge or remaining as the duly elected circuit judge.”

He backed up to 2011, when Duebbert began representing Rodriguez as a criminal defense lawyer in private practice.

“On numerous occasions, Rodriguez told plaintiff that he performed in a stellar manner in representing Rodriguez,” Mills wrote.

In his order, Mills found that on Sept. 26, 2016, Centreville police executed felony information charging Rodriguez with aggravated fleeing and attempting to elude them; Rodriguez paid Duebbert an initial fee of $1,300 through a friend; Duebbert negotiated a bond reduction from $50,000 to $10,000, but Rodriguez was unable to post it.

He also found Duebbert refunded $1,000 to the friend, who posted bond with it.  And, after the election, Duebbert arranged to transfer Rodriguez’s case to Dedra Brock-Moore; Rodriguez assigned his bond to Brock-Moore.

He found Duebbert negotiated a plea and Rodriguez rejected it; Rodriguez underwent drug and alcohol evaluation that resulted in a recommendation for intensive treatment as a condition of any probation; Rodriguez pleaded guilty on Aug. 22, 2017, accepting 18 months on conditional discharge, 24 months on probation and treatment, and a $500 fine.

He further found that Rodriguez made no statement to former circuit judge Jan Fiss regarding any issue or problem with Brock-Moore or Duebbert.

Enyart moved to withdraw the plea on Sept. 15, 2017; on Sept. 27, Enyart presented detective Collins with an affidavit executed by Rodriguez regarding allegations of criminal conduct.

“Rodriguez had refused to appear several times before to give his statement about the plaintiff to the Belleville police department,” Mills wrote.

“At the police department, Rodriguez refused to make any on the record or off the record statement to the police.”

Kelly moved for appointment of a special prosecutor on Oct. 5, 2017, and Chief Judge Andrew Gleeson granted it the same date.

Enyart amended the motion to withdraw the plea on Oct. 23, 2017, alleging criminal conduct for the first time.

Mills found Fiss withdrew the plea on Oct. 31, 2017, without objection from the state.

He found Duebbert alleged that Enyart didn’t appear in court.

He found Duebbert alleged that Alex Enyart sent messages advising Lamken-Finnell that Rodriguez told her he embellished some allegations.

He wrote that despite awareness of his criminal history, knowing his testimony was embellished, and not having interviewed him, and with no police investigation of any kind, defendants charged Duebbert with two felonies and two misdemeanors.

“The information for all four crimes was based solely upon the aforementioned questionable affidavit made by Rodriguez,” Mills wrote.

He found defendants could have presented the evidence to a grand jury.

“They chose not to present what plaintiff describes as slight evidence to the grand jury,” he wrote.

He found the charges carried a possible two to five years and substantial fines; on Feb. 18, 2018, while defendants possessed messages about embellishment, they sent Duebbert a plea agreement.

Mills found that on July 6, 2018, all four counts against Duebbert were dismissed.

“No further criminal charges have been filed against the plaintiff,” Mills wrote.

“Plaintiff has not been allowed to serve in his position as a duly elected circuit judge in St. Clair County for a period of over two years.”

These events didn’t meet his standard for deprivation of liberty, leaving him no way around the Eleventh Amendment.

“When the only liberty deprivation is from the initial arrest for an individual who is released on bond the same day, the person does not have a viable due process claim,” Mills wrote.

Mills extended the state's protection to Enyart, because Lamken-Finnell identified Enyart as a special victim advocate for Rodriguez.

He dismissed claims against Rodriguez for lack of jurisdiction.

“As with the other defendants, the plaintiff can pursue any state law claims against Rodriguez in state court,” Mills wrote.

Duebbert issued a statement in reaction to Mills’ order.

“The Seventh Circuit requires that a deprivation of liberty— i.e., the then-defendant and current plaintiff must have been in jail— must occur prior to the plaintiff being permitted to proceed with his federal constitutional claim,” Duebbert stated.

“Other federal circuits have reached different results concerning the definition of ‘deprivation of liberty.’ We believe that my arrest was a deprivation of liberty. A federal appeal may ultimately allow the U.S. Supreme Court to settle this discrepancy, to the great benefit of all litigants.”