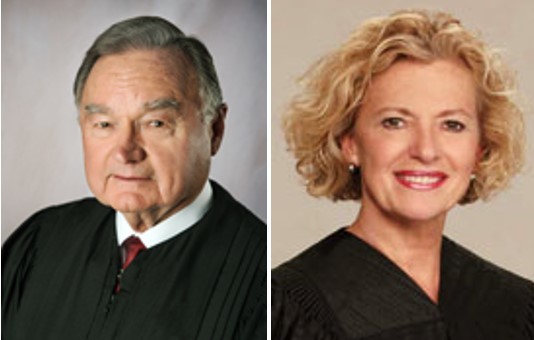 Four Justices found the Fifth District failed to grasp that further proceedings against Pneumo Abex and Owens-Illinois would serve no purpose.

He cited Fourth District rulings that the Fifth District could have copied.

“It was as if it had picked up a suspense novel and declared the mystery unsolved based on the first few chapters without bothering to finish the book,” Karmeier wrote.

“Had it proceeded to the end, the answers to its questions would have been revealed to the extent they were capable of ever being resolved.

“The book was complete. There would have been nowhere else to look.”

Plaintiff John Jones filed a lung cancer suit against Pneumo Abex, Owens-Illinois, and others in 2013, at Richland County courthouse in Robinson.

Pneumo Abex relied on the Rodarmel case, which it won at the Fourth District.

Circuit Judge William Hudson found the Jones case identical to Rodarmel except for testimony by expert Arthur Frank of Philadelphia on behalf of Jones.

Hudson found the testimony immaterial, and he granted summary judgment.

He spotted a fatal flaw in application of Fourth District decisions, writing that judges in those trials granted judgment after verdicts.

“Plaintiffs were not required to prove a conspiracy by clear and convincing evidence in order to survive a motion for summary judgment.”

Karmeier wrote that the Fifth District invoked the McClure ruling but made no substantive comparison between that case and this one.

“Indeed, after its perfunctory reference to McClure in the first paragraph of the analysis section of its opinion, the appellate court never mentioned it again,” Karmeier wrote.

He wrote that after cursory examination of other decisions, the Fifth District found them distinguishable because they didn’t arise from summary judgment motions.

He further wrote that the Fifth District failed to appreciate that the case does not present a typical summary judgment scenario where the issues have yet to face scrutiny and the objective is to determine whether a genuine issue exists.

The case arose from a long historical record that had been thoroughly explored and aggressively tested.

“Consistent with that background, the pleadings, affidavits, and other materials submitted by the parties, both in support of and in opposition to the motions for summary judgment, were exhaustive,” Karmeier wrote.

“The parties appear to have left nothing out, and they make no claim that there is additional evidence that still needs to be uncovered before the matter can be properly considered by the trier of fact.”

He wrote that if judgment notwithstanding a verdict were proper, summary judgment would also be proper.

“To hold otherwise would be nonsensical,” he wrote. “The circuit court did not make this same mistake.”

Though the Justices agreed with Hudson, they didn’t affirm him.

They sent the case back to the Fifth District and ordered its judges to conduct a thorough review like the one Hudson conducted.

“If the circuit court is correct that the evidence is insufficient as a matter of law to impose liability on defendants based on civil conspiracy, as other courts have so often concluded in the past, remanding to the circuit court for further proceedings, as the appellate court did, serves no valid purpose,” Karmeier wrote.

“Previous cases have provided a substantial amount of evidence weighing on the question of a civil conspiracy,” he wrote.

“In my view, a reasonable person could conclude from that vast collection of evidence that defendants conspired with other companies to suppress information about the health hazards of asbestos.”

So did Raymond Modesitt of Terre Haute, Indiana, and Reagan Simpson of Houston.