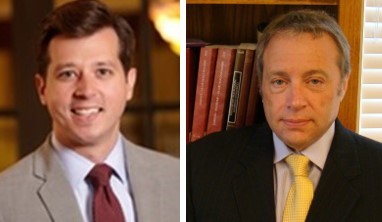 A pair of his suits in U.S. district court for the Southern District of Illinois named the U.S. as defendant, and the U.S. has moved to transfer them to Missouri.

Josh Tolin of Eureka, Mo. represents him in Missouri.

He named six doctors, three businesses, and a nurse practitioner as defendants.

Brown filed suit for Scott against Memorial Hospital of Belleville in St. Clair County in 2017, alleging negligence on visits about three months before surgery.

The complaints do not specify what acts were negligent, only that negligence occurred in diagnosing, treating and referring.

He claimed its agents and employees failed to act after receiving medical reports from Memorial Hospital.

This March, a day before a discovery deadline in that suit, he moved to stay it due to discovery of new facts.

In that filing, he wrote that the U.S. had reason to believe relevant reports were not received at the family health center.

He wrote that they might have been transmitted to the Scott Air Force base clinic, and based on this information, plaintiff Scott filed a claim against the Air Force.

He wrote that the Air Force had six months to investigate the claim before an action might be brought.

Six months ran out and Scott sued the U.S. in district court again this September, alleging negligence at the Air Force clinic.

On Oct. 9, in the federal suit against the family health center, he added Memorial Hospital as a defendant.

On Oct. 22, assistant U. S. attorney Nicholas Biersbach moved to transfer both federal suits to the Eastern Missouri district.

“Plaintiff has not chosen one forum in order to facilitate an efficient and just resolution of his claims,” Biersbach wrote.

“Plaintiff has cast his claims in three forums in four lawsuits against 12 different defendants.”

He wrote that cases would proceed against the U.S. without ten Missouri defendants who might be necessary parties.

“The United States could attempt to file third party complaints for contribution against those defendants,” he wrote.

“Any such complaint, however, would likely face challenges on personal jurisdiction grounds.”

Brown opposed transfer on Dec. 6, arguing that venue in a Missouri court wouldn’t be proper because Memorial Hospital is a defendant.

He wrote that Missouri defendants had no claim or interest in the action, and that their acts were additional and unrelated.

“While the issue of damages is the same in all of the actions, issues of liability and causation differ between the Illinois actions and the Missouri action,” Brown wrote.

On the same date Brown moved to consolidate the federal suits.

He wrote that if the actions were tried separately, the same witnesses and evidence would need to be produced at least twice on the same issues.

Biersbach filed a reply in support of transfer on Dec. 9, disputing the assertion that facts and issues were distinct.

He wrote that Scott presented to numerous facilities and providers in the months before he underwent amputation below the knee.

He wrote that the federal and St. Louis County suits involve common issues with respect to the cause of injury, contributory negligence and mitigation.

He wrote that Scott has a non reversible condition unrelated to any care provided, that he’s a chronic smoker, and that he unilaterally stopped blood thinning Warfarin therapy.

He wrote that the St. Louis County suit has been pending for four years and the St. Clair County suit for two and a half years, without progress in either.