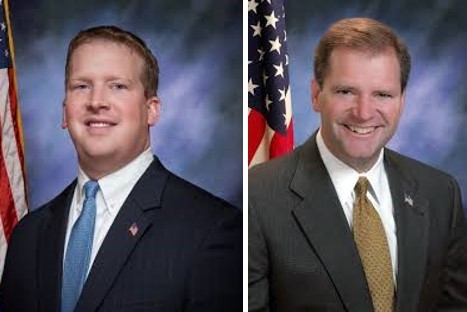 Republican Sen. Jason Plummer of Edwardsville is in a tiff with his own party’s leader in the Illinois Senate, over what Plummer says is a need to prevent state lawmakers from profiting in the industries they regulate.

Plummer says the Senate’s Republican leader, Bill Brady of Bloomington, has tried to block a bill he is filing “that severely curtails the ability of lawmakers and staff of the Illinois General Assembly from having ownership in, or being compensated by, the gaming industry while in office” and addresses “some of the serious conflicts of interest that presently can exist between lawmakers and industries over which they hold significant influence.

Plummer also says Brady offered him a spot on the legislature’s Joint Commission on Ethics and Lobbying Reform if Plummer stopped talking about Brady’s business dealings in the gaming industry.

“It was said multiple times that he would not appoint me if I followed through on filing that legislation that I had worked on, or if I spoke publicly about it,” Plummer told TV station WCIA. “I was kind of surprised that he was as forward as he was. I said to him, I said, ‘Geez, Bill.’”

Brady has financial ties to Midwest Electronic Gaming, one of the state’s largest operators of video gambling machines. Brady has declined to state how much he has profited from the business.

Brady did not immediately return a reporter’s message to his office, but he has said video gambling was never mentioned in his discussions with Plummer about serving on the commission.

Brady issued the following statement: “When considering whom to appoint to this important commission, I felt it important, as always, that the members chosen serve as our caucus representatives,” Brady said. “In any of my discussions with potential appointees, specific legislation was never discussed. I have always, and will always, put the caucus first in my role as leader.”

Brady also has issued the following statement about his gambling interests:

“I have an interest in a company that has a contractual agreement with a video gaming company and have disclosed such. Any information I offer regarding this issue during discussions is based on my personal knowledge of the industry, and I act in what I believe to be in the public interest. When deciding how to vote on any legislation involving video gaming, I consult with my ethics officer and either abstain from voting or vote in the public interest as required by the Illinois Governmental Ethics Act.”

“If the average Illinois citizen knew their elected officials were making laws to create and expand protected industries from which they are themselves earning money, they would be disgusted. But that’s what’s happening and it needs to stop, immediately,” Plummer said.  “If we’re going to restore the trust of the people of Illinois in their state government we have to make sure strong and independent voices exist to represent the reform measures that, while maybe not popular among the political class, are common sense and necessary to fix our broken system.”

Plummer declined the position on the ethics commission, telling Brady in a letter that “I am unable to serve under the conditions and restrictions your set forth.”

Brady, in a response letter to Plummer, stated: “When we first discussed your appointment, I indicated you would need to represent the views of the Senate Republican Caucus not merely your own interests. This would include you not filing any of your own ethics legislation without taking caucus views into consideration. I brought this forward to ensure you were not pursuing any outside interests and would continue to serve in the General Assembly and would adhere to any reform legislation enacted by the legislature.”

In 2010, Plummer was Brady’s running mate when Brady ran unsuccessfully for governor.