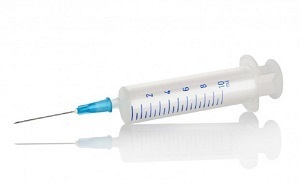 EDWARDSVILLE - The owner of a newly-purchased, second hand vehicle was stuck by a used syringe needle as she rummaged underneath one of the seats, according to a complaint filed against the sellers.

Carlotta Harris claims the sellers, DBJ Automotive II, doing business as JD Byrider of Wood River, were negligent for failing to properly clean the car so they would have found the the syringe prior to the sale.

She filed suit against the company Oct. 11 in Madison County Circuit Court, asking the court for more than $50,000 for physical injury and emotional suffering. JD Byrider did not immediately respond to a request for comment from the Record.

Harris, in her complaint, states that, on Oct. 12, 2017, she was driving her Dodge Caravan bought from the Wood River dealer.

The plaintiff dropped her debit card underneath the front passenger seat. When she reached down and under, her right hand ring finger was stuck by a "used syringe needle," according to the complaint. She claims the syringe was underneath the seat at the time the defendant sold the vehicle.

Harris claims the company, and its representatives, had a duty of care to hand over a safe vehicle at the time of purchase.

She also claims that in the aftermath of the incident she has suffered both physical and emotional distress.