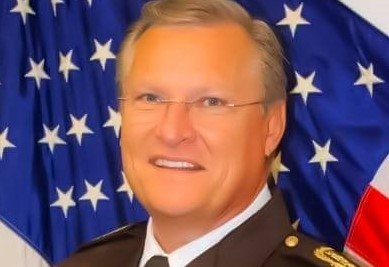 CAHOKIA – St. Clair County sheriff Rick Watson let lawyer Leah Captain speak for him at a police pension board meeting on Oct. 16, when trustee Francella Jackson asked him how he came up with the numbers for his pension.

Captain stood up in the gallery and said, “I represent Rick Watson and I have advised him not to answer any questions.”

At the end of the meeting, trustees passed a motion to engage the accounting firm of Lauterbach and Amen in Naperville to calculate Watson’s pension.

Watson, who retired as Cahokia police chief in 2011, didn’t vote on the motion as a member of the pension board.

The accounting firm will also calculate pensions of James Jones and Lawrence Purcell.

Examiners at the Illinois Department of Insurance reported earlier this year that the pension fund overpaid Watson, Jones, and Purcell.

Trustees discussed the report at their September meeting, and discussion continued at the October meeting.

Board counsel Dennis Orsey said that under the law on mistakes in benefits, a pension fund can go back three years to recover overpayments or longer in case of fraud.

He said case law provides that before trustees adjust benefits, they must provide notice and a hearing if a member requests it.

After a hearing, he said, a party would have 35 days to appeal to circuit court.

Orsey said the court would review the hearing record like an appellate court.

Orsey said there is no automatic right of appeal to the Supreme Court, but a party can petition for leave to appeal, a process that could last 18 to 20 months.

He told Watson and Jones he believed they had a pecuniary interest in the matter.

He asked if they agreed, and they said yes.

Orsey said it would be appropriate for the three remaining trustees to proceed.

Watson and Jones didn’t get up to leave, and the open session continued.

Trustee David Heine asked chairman Ben Callahan for the amounts of overpayment in the report.

Trustee Jackson said that before Watson and Jones left, she wanted to ask them how they came up with the numbers for their pensions.

Orsey said he got a call from Purcell’s attorney about possible litigation.

“They can answer any way they want to.”

Jackson said she couldn’t make a decision without answers.

Lawyer Captain, who practices at Bruce Cook’s firm in Belleville, announced herself and shielded the sheriff.

Jones held his tongue without advice of counsel, and he and Watson left.

The executive session lasted more than an hour.

Callahan and Heine voted for the motion.

Jackson said afterward that trustees talked about engaging Lauterbach and Amen at their September meeting.

Want to get notified whenever we write about Cahokia Police Pension Fund ?

Sign-up Next time we write about Cahokia Police Pension Fund, we'll email you a link to the story. You may edit your settings or unsubscribe at any time.