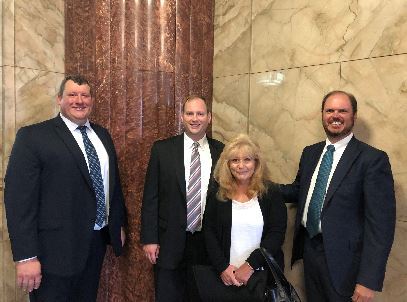 A St. Louis jury awarded a former mechanic and his wife $8.433 million in an asbestos trial against Ford Motor Company.

The jury reached a verdict in favor of plaintiffs Al and Pam Bennett on Aug. 22 in Judge Christopher McGaugh's courtroom.

The Bennetts were represented by Chris Layloff and Jason Steinmeyer of Gori Julian & Associates PC in Edwardsville.

Ford Motor Company was represented at trial by Sherry Ann Rozell, Brita Cantrell and Steve Ward of McAfee & Taft, according to the docket sheet.

“Chris and I couldn’t be more honored to represent Al and Pam,” Steinmeyer stated in a press release following the verdict. “Although Al is currently suffering from pleural mesothelioma, we hope that this sizable verdict will help him and his family find some peace during this difficult time.”

Bennett was born and raised in St. Louis. He had been employed as a mechanic at Ford, Mercury and Lincoln automobile dealerships from the 1960s until the 1980s.

According to his complaint, Bennett was allegedly exposed to asbestos fibers by working with brakes, gaskets, clutches and OEM replacement parts. Bennett later developed pleural mesothelioma in his right lung.

According to a press release, Al Bennett was undergoing treatment and was unable to attend trial. Pam Bennett attended on his behalf.

“Chris and Jason are always fighting tirelessly for their clients, and this case is no exception,” founding partner Randy Gori stated. “I’m extremely proud of our team and their effort in obtaining justice for Mr. and Mrs. Bennett.”

“We’re happy to achieve justice for our clients, especially wonderful people like Al and Pam,” Layloff stated. “Hopefully this verdict serves as a lesson for companies large and small; when companies do wrong, they should expect to face justice.”

According to asbestos filing numbers reported by Washington-based consulting group KCIC, Gori Julian filed the most asbestos cases in the nation with 348 cases at mid-year. Compared to last year, the firm filed 306 cases at mid-year in 2018, representing a 13.7 percent increase.