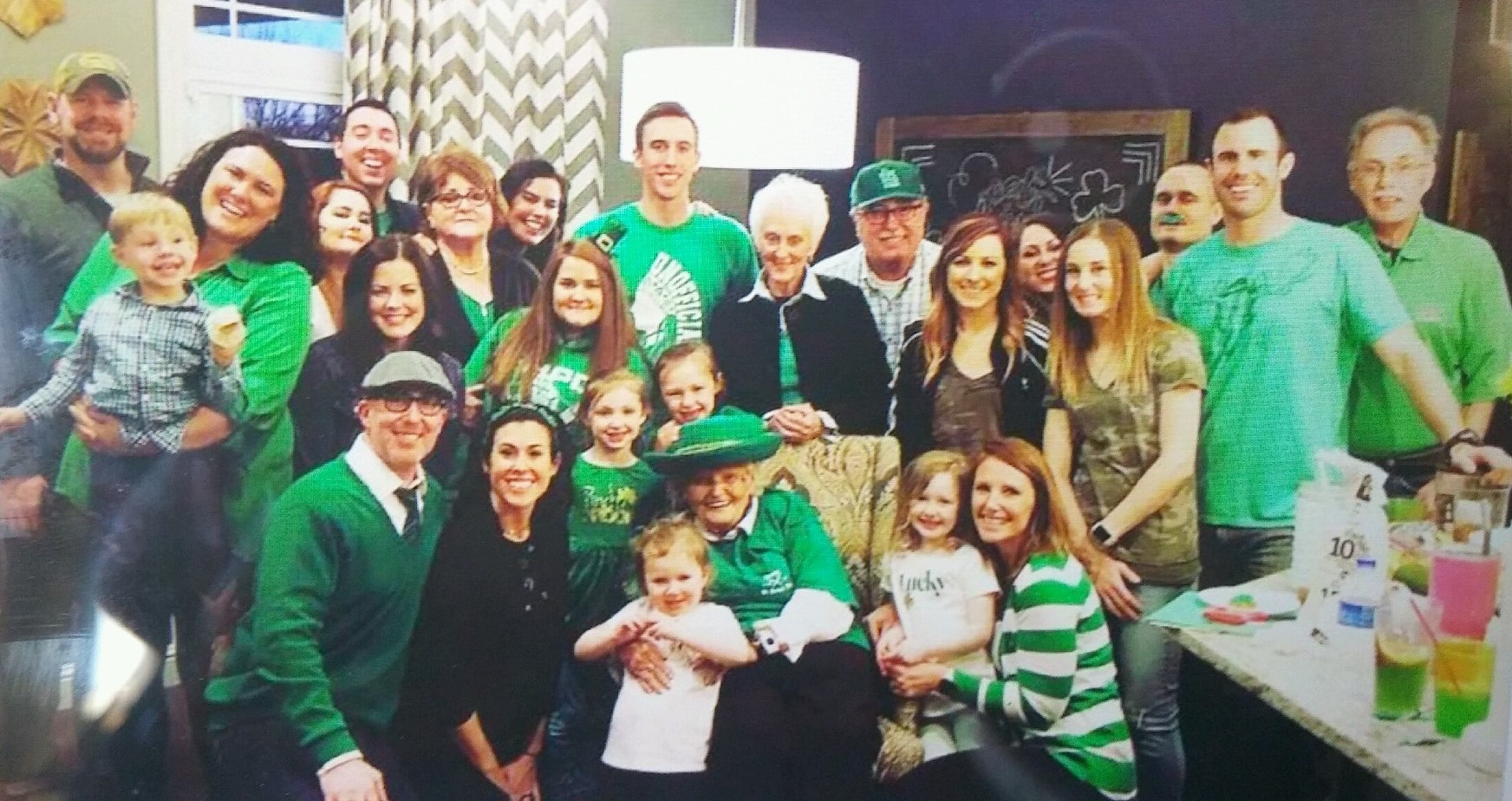 In a recent extended family photo, Nick Hopkins pictured second from right, and Whitney to his right

Illinois State Trooper Nick Hopkins is remembered as a man with an infectious smile who showed kindness to everyone and embodied a Christ-like servant’s heart.

“When you look at his picture, you see the big smile on his face,” said Waterloo Mayor Tom Smith. “That was Nick all the time.”

“That’s a genuine smile,” he added. 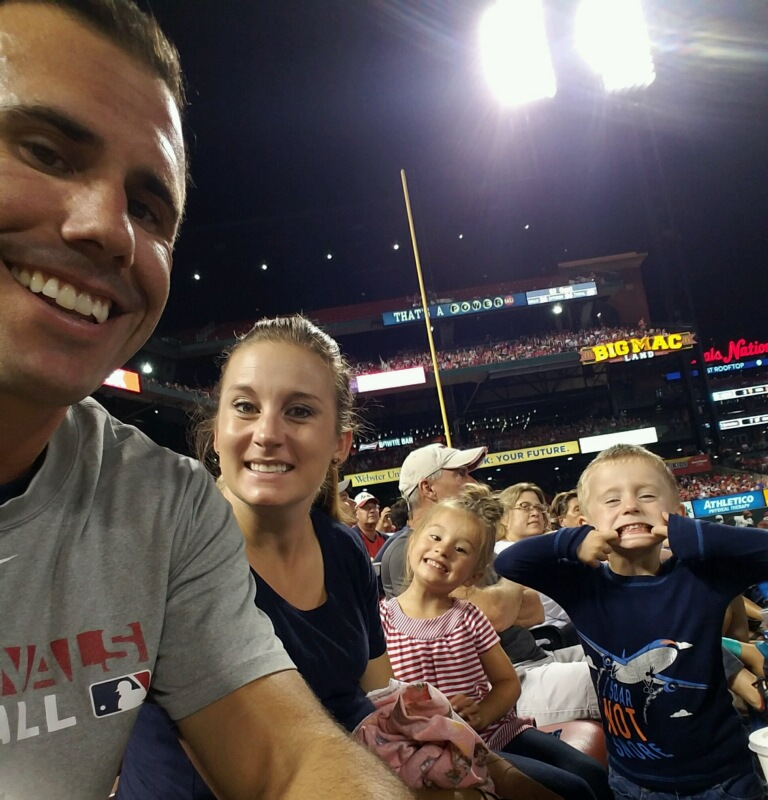 Nick, Whitney and the twins at a recent St. Louis Cardinals game

Reflecting on Nick's life, Pastor Jamey Bridges of Life Community Church in Columbia said Nick sometimes had to be told “no” because he wanted to serve and help others every chance he got without expecting anything in return.

“Servant’s heart – I imagine his picture is next to that definition,” Bridges said.

He added that the community and those who knew Nick are feeling the weight of his loss so heavily because of the man he was.

“When you have a heart like that, it just affects so many people,” he said.

Bridges said that a passage of Psalm 23 comes to mind: “Even though I walk through the valley of the shadow of death, I will fear no evil, for you are with me; your rod and your staff, they comfort me.”

"For there to be a shadow, there has to be light," Bridges said. "And to me, Nick was light. He was light the way he lived."

Bridges shared a story about Nick, reflecting his eagerness to serve.

He was talking with Nick about two months ago and mentioned that his fence had been damaged in a storm and he was in the process of fixing it. Nick immediately offered to help, saying he’d like to check it out. Bridges turned down Nick’s offer, telling him he had enough on his plate and didn’t need one more project.

Bridges said Nick texted him two days later without warning telling him he was on his street and would be there soon. Minutes later, Bridges said Nick showed up outside his home in his SWAT vehicle, likely coming over after just finishing his shift at work.

“He was thinking of me coming off of work,” Bridges said.

Bridges said he spent 20 minutes convincing Nick why he should not help with the fence project.

“He had a thousand other things to think about, and he was thinking about my fence,” Bridges said.

He explained that Nick didn’t see the projects he helped with as something he had to do, but something he got to do.

Bridges added that the way Nick lived and the way he smiled made people realize something was different about him.

“Every time I walked away from the guy, I mean every time, you were challenged to live better,” Bridges said. “If nothing else, you were cheered up.”

“You walked away from him going, ‘I want to be better,’” he added.

He explained that Nick’s character reflected his relationship with Christ.

Bridges also talked about when Nick volunteered with the church to help at the St. John Bosco Children’s Center in Belleville, which “provides therapeutic residential care” for boys and girls “who need to heal from trauma in their young lives,” according to the center’s website.

He said Nick's wife Whitney served as a counselor at an annual camp for the children at the center when Nick brought his SWAT vehicle, allowing the kids to tour and ask questions. One child asked Nick how many times he has shot at someone. Nick gently responded that officers don’t just shoot at people. They first talk to people kindly and try to understand the situation.

“This child was kind of at a loss and looked at law enforcement a little differently after that,” Bridges said.

He added that the child went into the question with a mindset of injustice but quickly changed his perspective because of Nick’s kindness and gentleness.

Bridges said Nick and Whitney Hopkins began attending the church in January 2018 and “jumped right in.”

In the year and a half that Nick attended Life Community Church, his character, kindness, and eagerness to serve earned him such a strong reputation, he said.

Both Bridges and Mayor Smith urged people to live the way Nick lived.

Outside of his service to the community as a trooper, Nick was known for his carpentry skills.

Smith said he had endless stories of Nick helping friends, family, and community members with projects including building fences, constructing sheds, and putting in kitchen cabinets.

He explained that people are called to love and forgive, even when it’s difficult. People are comfortable with forgiveness when they are the one being forgiven, but the act is harder “when the headline hits home,” Bridges said.

“It’s so easy to talk about forgiveness when everyone is good in your life,” Bridges said. “But so difficult when someone is taken from you.”

Trooper Hopkins was executing a search warrant at a residence on North 42nd Street in East St. Louis on Aug. 23 at approximately 5:26 a.m. when he was struck during an exchange of gunfire. Suspected shooter Christopher R. Grant is alleged to have fired a weapon from inside the residence striking Hopkins in the head.

He was transported to a local hospital with life threatening injuries and succumbed to his injuries at approximately 6:10 p.m.

Bridges said Nick’s family is relying on their faith as they navigate their loss and grief.

“As a follower of Jesus, we believe that this is temporary and where we are living is temporary. And there is hope in Heaven,” he said. “This is not gone forever, but see you later.”

“That source of strength is coming from that assurance,” he added.

Services will be held at the Waterloo High School. Visitation will be from 3 to 9 p.m. on Aug. 31. The funeral will be held at 10 a.m. Sept. 1 with Pastor Bridges officiating.

Want to get notified whenever we write about City of Waterloo ?

Sign-up Next time we write about City of Waterloo, we'll email you a link to the story. You may edit your settings or unsubscribe at any time.