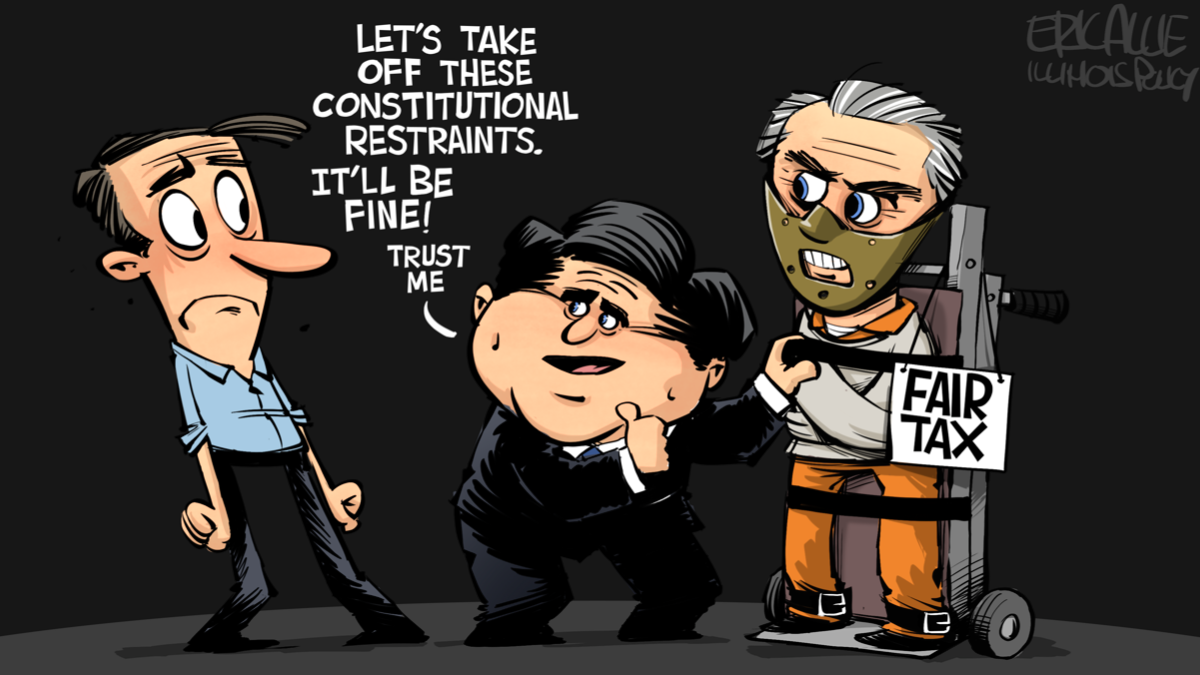 Former state Rep. Jerry Costello II, D-Smithton, was the first Democrat in the Illinois House of Representatives to declare his opposition to Gov. J.B. Pritzker’s progressive income tax constitutional amendment earlier this year. He represented the 116th House District, in the southwest corner of the state.

New polling shows Costello’s successor – who assumed office in May after Pritzker appointed Costello to a position with the Illinois Department of Natural Resources – would be wise to follow in his footsteps.

In order for Pritzker to pass his proposed $3.4 billion progressive income tax hike, he first needs to scrap the Illinois Constitution’s flat income tax protection. Senate Joint Resolution Constitutional Amendment 1 would do this. And it currently awaits a vote of the full Illinois House. If 71 House members vote “yes” on the amendment, the measure will appear as a referendum question on the statewide general election ballot in November 2020. And if voters approve it, Illinois lawmakers could then pass graduated, or “progressive,” tax rates that rise with income.

Recent polling data reveal newly appointed state Rep. Nathan Reitz, D-Steeleville – who now represents House District 116 – could face significant backlash at the ballot box for voting “yes” on SJRCA 1, regardless of his vote on any income tax rates lawmakers eventually set. This echoes polling from March that showed strong opposition to Pritzker’s progressive income tax in nearby House districts 111 and 112, which are held by state Reps. Monica Bristow, D-Alton, and Katie Stuart, D-Collinsville.

The following results are from live polling of 300 likely voters in House District 116 from May 19-20, conducted by Fabrizio, Lee & Associates on behalf of Illinois Policy. (summary memo, topline results, crosstabs).

A strong majority of likely voters have recently seen, read or heard about Pritzker’s proposal to change to the state’s income tax system from flat to progressive. Republicans (72%) and independents (71%) are more likely to be aware of the proposal than their Democratic counterparts (57%).

Just 22% of likely voters favor Pritzker’s proposal to put a progressive income tax constitutional amendment on the ballot while 57% oppose it, including 44% who “strongly oppose” the measure.

When given detailed information on how the amendment will work, opposition remains strong

Poll respondents received the following question and explanation of the constitutional amendment process:

After this detailed explanation, 58% of respondents opposed putting the progressive income tax amendment on the ballot while 33% were in favor.

By a more than 2-to-1 margin (41% less likely versus 18% more likely), voters would be less likely to vote for a state representative who voted in favor of the governor’s proposed constitutional amendment. The negative impact would be strongest among Republicans (-47), but even independents would be less likely by a wide 26-point margin.

Nearly half (49%) of poll respondents think state lawmakers would raise their income tax bill if the progressive tax amendment passes at the ballot box, while only 15% thinks their income tax bill would go down. Pritzker’s claim that only 3% of Illinoisans would see a tax hike under his plan while the rest of the state would see income tax relief or no change in their bill has clearly not penetrated.