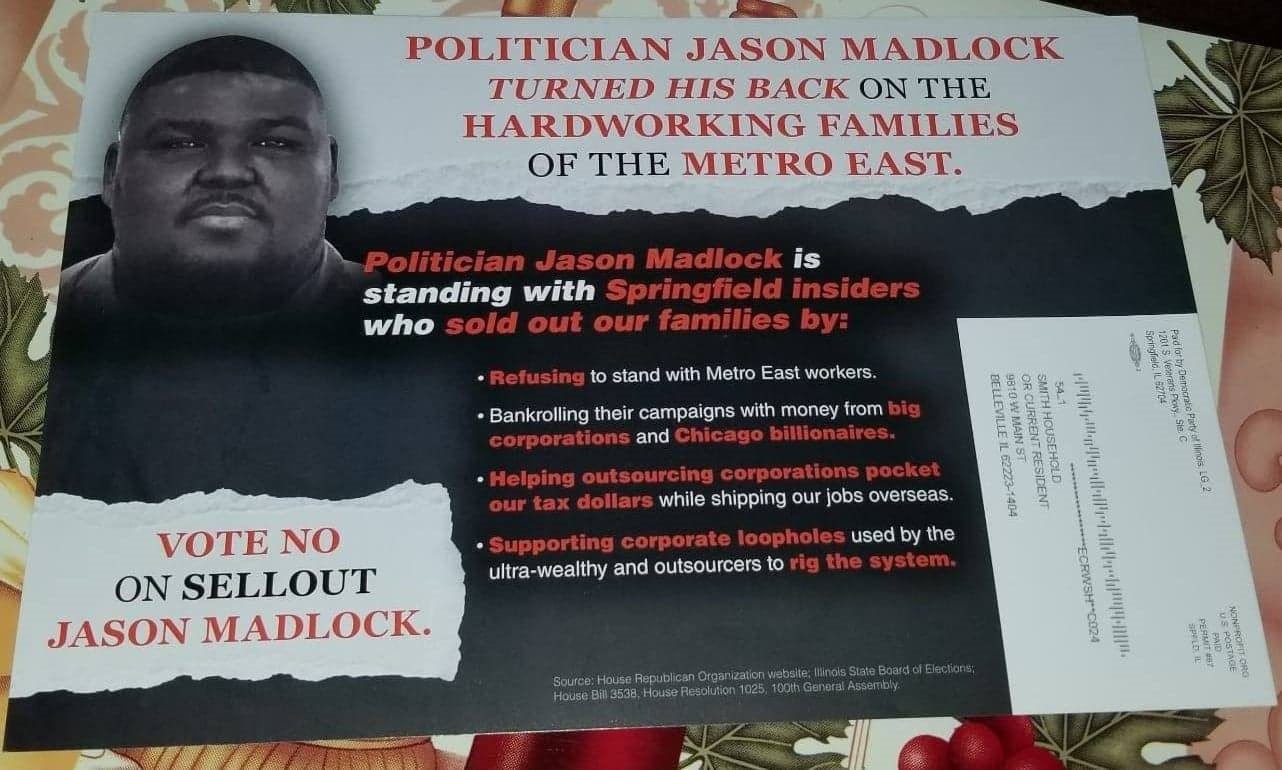 A Republican candidate for the Illinois House of Representatives has described as "preposterous" an attack flyer linking him to corporate interests and Springfield insiders.

Aimed at Jason Madlock, running for House District 114, the flyer describes him as a politician who has "turned his back on the hard working families of Metro East."

And Madlock - who has never held political office, is self funding his campaign, and claims to have turned down money from the Republican Party and moneyed individuals - is described in the flyer as "standing with Springfield insiders."

The attack ad sent to voters home in a district that includes East St. Louis, and parts of Belleville, Freeburg, Shiloh and Mascoutah, was paid for by the Democratic Party of Illinois, according to the return address on the direct mail.

"First off I want to go ahead and tell you I thought it was the most hilarious thing ever," Madlock told the Record, referring to the flyer. "If I had billionaire friends, I probably would not be running for office."

He added, "It's preposterous and I have no idea where they got the information from."

The flyer, one of two mailed, is written in such a way that it appears Madlock had some say with fundraising and policy in Illinois, with phrases such as "big corporations," "Chicago billionaires," "outsourcing tax dollars," and "corporate loopholes" prominently highlighted beside the candidate's image.

But, on more careful reading, he is actually accused of "standing with Springfield insiders," who are involved with the groups and policies described in the flyer.

This includes, apparently, "supporting corporate loopholes used by the ultra wealthy and outsourcers to rig the system."

"I live in East St. Louis. I have never had any say on tax policy," said Madlock, a precinct committee man for his party.

Rep. Greenwood's office did not reply to calls requesting comment.

According to illinoissunshine.org, which tracks candidate funding, Madlock has not received any money from any individual or group during this campaign.

Friends of LaToya Greenwood has approximately $37,000 cash in hand, and has received political donations of close to $200,000, including $60,000 from the Democratic Party of Illinois, according to the same site..

Meanwhile, Madlock said, "I have been offered a lot of money, by the Republican committee and by individuals, but I turned it down."

"That money should go to the people, go to schools, go to the homeless," he said. "The last thing you need is for money to be funding politicians.

"People told me it is not the smartest thing to run for the House, that you will want financial backing but I believe being out there knocking on doors."

Madlock said that the two attack flyers against him cost more than he has spent in total.

He also did not express bitterness at the false claims made about him.

"It will give me more of an edge, more name recognition," he said.

He said that his political philosophy is that the party should not matter, that the voters should back those individuals they believe will do the best job for the community.

But he added. "St. Clair, County and Illinois has been under Democratic control, and no progress has been made."

"If you have seen the amount of corruption, maybe not by political party (as a whole) but I am pointing fingers at individuals," he said.

He said he was not referring to Greenwood.

Madlock said that being a black Republican from East St. Louis makes him stand out, but "the question is  what can I do for the people. I am not begging for votes, just asking people to vote for the right person."

The candidate senses that the the motivation for the delivery of the flyers may be rooted in the possibility that the "Democrats are in trouble."

But he understands his candidacy is a long shot in the heavily Democratic district.

"This is based on long term goals for change, stretching 10 to 20 years maybe. If it starts with me, that is great, or with someone in the future," Madlock said.