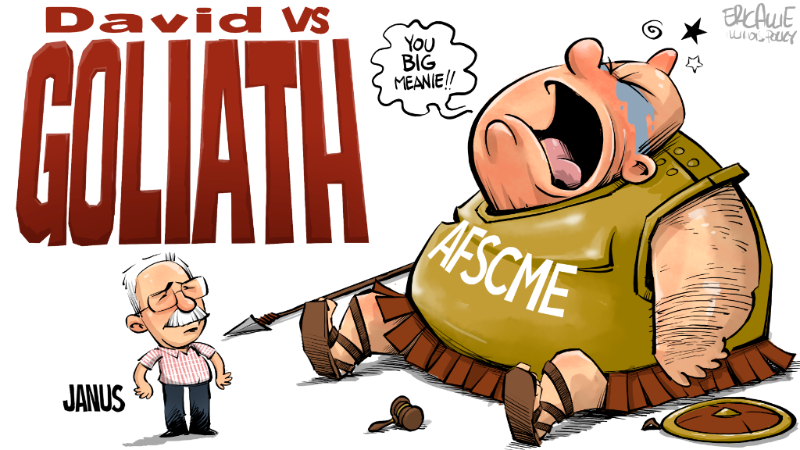 The case, Janus v. AFSCME, is a landmark decision. For decades, government workers in many states were forced to pay fees to government unions as a condition of employment.

That changes with the court’s June 27 ruling. The case, brought by Mark Janus, a child support specialist for the state of Illinois, challenged that unconstitutional scheme, arguing that forcing workers to subsidize unions through mandatory fees violates workers’ First Amendment freedom of speech.

The court agreed, ruling that government unions “may no longer extract” fees from “nonconsenting employees.” To do so would violate the First Amendment.

Janus was represented in court by the Illinois Policy Institute’s litigation partner, the Liberty Justice Center, as well as the National Right to Work Legal Defense Foundation.

Government workers will now get to choose for themselves whether they want to financially support their unions. But it won’t happen automatically. Workers will likely need to take the affirmative step of opting out of the union in order to see their paychecks affected.

Here’s what the case means for government workers – and what it doesn’t mean.

What Janus means: Government workers’ rights to freedom of speech are restored

Janus marks a win for worker freedom across the nation. Government workers’ freedom of speech has been restored.

Approximately 5.5 million workers across 22 states – including around 370,000 government workers in Illinois – now have a choice in whether to pay money to a union.

Teachers, police officers and other government employees no longer have to surrender part of their paycheck to a union simply because they have chosen to serve others by taking a government position.

But Janus is just the beginning.

In order to assert their First Amendment rights affirmed by the court’s decision, government employees who don’t want to be union members or to pay fees to unions may need to affirmatively opt out of their unions and out of fee deduction arrangements. Generally, that includes 1) written notice to the union opting out of membership, and 2) written notice to the government employer that the worker no longer authorizes dues or fees to be taken from his or her paycheck.

These public employees can do this with no effect on their compensation or other benefits – such as overtime or seniority – provided in their collective bargaining agreements.

Workers who have already opted out of their unions – commonly referred to as fair share payers – may not immediately see a change in their paychecks. To best ensure dues or fees are no longer docked, fair share payers should also give written notice to their government employers.

For more information on how to opt out of a government union, visit leavemyunion.com.

What Janus doesn’t mean: The end of government union power in Illinois

Government unions will continue to maintain all other powers afforded them under state law. Collective bargaining itself will not be affected.

And any government workers who want to maintain union membership are free to do so – nothing changes for union members.

The court’s decision simply guarantees that government workers are no longer treated differently than other U.S. residents. They now get a voice and a choice on where their hard-earned money goes.