After three months at Simmons, Wigginton no longer on firm's roster

ALTON – Simmons Hanly Conroy law firm removed former U.S. attorney Stephen Wigginton from its roster and withdrew from a class action he brought with him from a previous job.

On Feb. 23, the firm notified U.S. District Judge Michael Reagan that it would withdraw from Flynn v. Chrysler, a case Wigginton has litigated since 2015.

The notice did not name Wigginton, who remained on the docket. 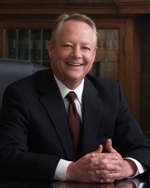 Ted Gianaris, who filed the notice, had not entered an appearance.

He resigned and joined the St. Louis firm of Armstrong Teasdale, which attached him to a team pursuing Flynn’s class action.

He seeks to recover the difference in value between his Jeep and one with a secure information system.

On Dec. 7, he notified Reagan that he moved to Simmons Hanly Conroy.

His name remained on the firm’s online roster into February, but did not appear there as of Feb. 23.

The firm didn’t respond to a request for Wigginton’s status.