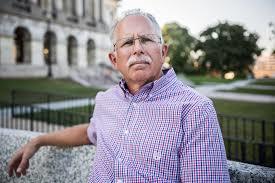 It’s an unfair decision: Pay the union or lose your livelihood.

It means anyone who wants to dedicate his or her life to being a teacher, child services worker or firefighter automatically loses constitutional rights enjoyed by others in American society.

The plaintiff in the case, Mark Janus, loves his job. As a child support specialist with the Illinois Department of Healthcare and Family Services, he advocates for kids when their parents aren’t together anymore.

The Supreme Court’s decision to take Janus’ case has generated headlines across the country, with union leaders asserting that a decision in Janus’ favor will hurt government-worker unions.

But that’s a distortion of what the case is about. Janus is about restoring First Amendment rights to government workers, giving them a choice whether to support a union. It’s about ensuring their ability to exercise the same rights as every other person in this country. And it does not mean the end of government-worker unions in Illinois.

The First Amendment guarantees everyone the right to choose which organizations to join or fund. But current Illinois law – as well as laws in 21 other states – prevents some workers from exercising that right.

In its 1977 decision Abood v. Detroit Board of Education, the Supreme Court ruled that public employees like Janus could be forced to pay for union representation, regardless of whether the worker wants to be represented by the union. Since then, government workers in Illinois have been forced to pay union fees as a condition of their employment.

But if the Supreme Court rules in Janus’ favor, every government employee across the country will have the right to exercise the freedoms of association and of political expression the First Amendment guarantees – and to choose for himself or herself whether to give money to a union.

If Janus wins, it does not signal the end of government-worker unions in Illinois. Nothing would change in the collective bargaining process between government units and government worker unions.

Unions will still represent their members at the bargaining table.

Unions will still bargain over wages, hours and other conditions of employment.

Unions will still be able to go on strike as permitted by state law.

Unions will still represent workers in grievances against their employer.

That undermines union leaders’ claims that a decision for the plaintiff in Janus will up-end public-sector collective bargaining.

In fact, the lamenting of union leaders over the potential outcome in Janus is more of an admission. If union leaders sincerely believe members will walk out the door if given the opportunity, that means those unions must not be satisfying those members in the first place.

Janus could actually spur union improvement. If unions have to work and prove their value to earn members’ loyalty, workers should get better services from the union.

And if union leaders’ fears come to pass and unhappy members head for the exits, that’s all the more reason for the Supreme Court to grant the relief Janus requests. Workers should not be forced to pay an organization that is not representing their interests.

Want to get notified whenever we write about American Federation of State County and Municipal Employees Council 31 ?

Sign-up Next time we write about American Federation of State County and Municipal Employees Council 31, we'll email you a link to the story. You may edit your settings or unsubscribe at any time.