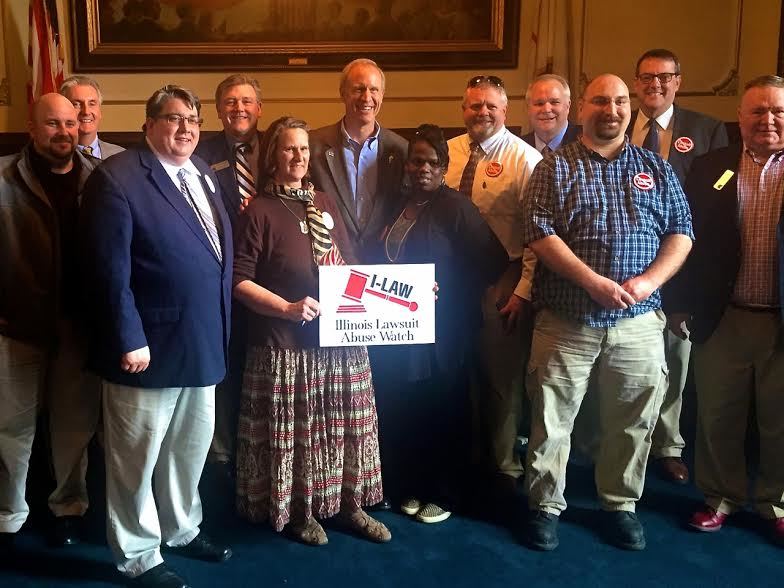 SPRINGFIELD – A group of small business owners converged at the capitol March 28 in a "Rally for Lawsuit Reform," to urge support for civil justice reforms.

I-LAW's executive director Travis Akin said the idea is to limit the filing of a civil lawsuit to the court system in which an alleged incident occurred or where the plaintiff lives.

“The biggest issue that I’ve been working on since I got involved in I-LAW back in 2008 has been our venue reform proposal," I-LAW Executive Director Travis Akin told the Record. "Every year in the General Assembly, legislation gets introduced that would do some sort or type of venue reform.”

He said that venue reform "would really cut down a lot of the abusive lawsuits that you see in Madison and St. Clark counties where you have plaintiffs from all over the globe finding their way into the Madison County courtrooms. Particularly, the asbestos cases there.”

Akin and I-LAW argue that the current legal climate in Illinois has caused business owners to migrate to neighboring states, and it also discourages new businesses from moving in. As a result, he said, there are fewer jobs, a high unemployment rate and an overall negative impact on the economy.

In a Harris poll conducted in 2015, results showed that Illinois was ranked 48 out of 50 for its liability systems. In the survey, 75 percent of respondents said a state’s litigation environment could influence decisions such as how and where they would manage their businesses, with 44 percent responding somewhat likely and 32 percent very likely. In addition, Illinois has placed high in a 2017 ranking summary from the U.S. Bureau of Labor Statistics, with an unemployment rate of 5.4.

Akin said that Illinois needs businesses to stay and invest in the state.

Despite the challenge of getting reforms passed in a state legislature resistant to a pro-business agenda, Akin was pleased with the rally.

“We’re going to keep fighting," he said. "We met with the legislative leaders. We met with House Republican leader Jim Durkin and we met with some high-level staffers for the Senate Republican leader Christine Radogno. They were all supportive of what we’re trying to do and they understand we need these reforms. It was good for us to talk to them and get that assurance that they’re going to keep fighting to get it done."