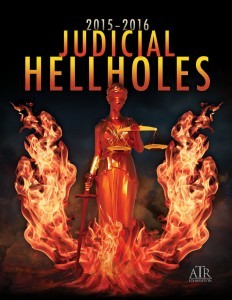 Calling Missouri the “Show Me Your Lawsuits” State, ATRA notes that St. Louis managed to knock California out of its usual number one place with “’fast trials, favorable rulings and big awards.’”

In fact, four of the top six product liability verdicts in the country this year came out of the St. Louis Circuit Court.

ATRA says St. Louis is a hotspot for out-of-state plaintiffs thanks to Missouri’s “lax standard for expert testimony” and laws allowing forum shopping.

The Hellholes report outlines the newest “trap, trash and trick” tactics used by plaintiff’s lawyers to bring roughly 2,100 individual talcum powder claims, which were grouped into about 260 separate lawsuits nationwide.

These cases allege that use of talcum powder causes ovarian cancer. However, the Hellholes report states that no scientifically sound evidence exists.

Approximately two-thirds of the talcum powder claims have been filed in St. Louis, and just three huge verdicts this year total $197 million in awards for plaintiffs form Alabama, South Dakota and California.

ATRA explains that the trap tactic involves plaintiff’s attorneys trapping talc defendants in St. Louis because Missouri “is one of a shrinking minority of holdout states that have yet to adopt the more exacting Daubert standard for expert testimony.”

Daubert provides a standard requiring “judges to act as gatekeepers in reviewing the substance of expert testimony before it is presented to a jury in order to weed out fanciful evidentiary theories that haven’t passed peer-review muster.”

ATRA also credits the state’s venue laws for enabling plaintiff’s attorneys to trap talc cases in St. Louis, which “allows lawsuits to be filed in any county where at least one individual claimant – among the scores comprising a typical talc lawsuit – resided [where] her alleged injury occurred.”

Further, a local “anchor-claimant” can be added for the sole purpose of keeping a litigation in state court.

The tactic involves plaintiff’s firms investing in local TV advertising to “trash” defendants and their products.

For example, Johnson & Johnson talc defendants in plaintiff Tiffany Hogans’ lawsuit filed a motion to change venue in July, seeking to transfer the case to a jurisdiction that is “outside the St. Louis media market and at least 100 miles away in order to minimize the jury taint” from the ads.

The report states that in March alone, 23 percent of all talcum powder litigation ads aired in St. Louis even though the market comprises 1 percent of the national television audience.

What gets lost on the public is that the scientific, medical and regulatory communities say that no relationship between talcum powder and ovarian cancer exists.

ATRA points out that two experts who testified in St. Louis were deemed unqualified to testify in New Jersey, where two talc cases were dismissed in September.

“Nevertheless, defendants’ pleadings to have those so-called experts excluded from St. Louis trials fall on deaf ears. Judges there invariably allow the introduction of this junk science and, with visibly ill women or their surviving loved ones as sympathetic clients, practiced injury lawyers then pluck jurors’ heartstrings and persuade them to come back with outlier verdicts that fly in the face of genuine science,” the report states.

In late June, lame-duck Gov. Jay Nixon vetoed legislation that would have adopted the Daubert standard for expert evidence in Missouri.

“But lawmakers are expected to try again in 2017, and with a newly elected governor who’s less dependent on plaintiff’s bar cash, hope springs eternal,” the report states.

ATRA notes in its report that “junk science” in Missouri courts extends beyond talc suits.

In May 2016, a St. Louis jury returned a $46.5 million verdict against Monsanto in a case alleging three plaintiffs developed non-Hodgkin lymphoma by eating foods contaminated with PCBs. The plaintiffs were residents of Alaska, Michigan and Oklahoma.

Nearly 100 plaintiffs have similar cases pending in St. Louis, with only three from Missouri.

The American Cancer Society argues that most forms of non-Hodgkin lymphoma have no known cause, and lymphomas typically develop as people age.

The Hellholes report states that the “Show Me Your Lawsuits State” became a “litigation tourism hot spot” following a unanimous decision by the state’s Supreme Court in October that “effectively rolls out a welcome mat for out-of-state plaintiffs suing out-of-state defendants over alleged out-of-state injuries.”

In that case, Heartland Title Services and James Day asked the Missouri Supreme Court to prohibit Jackson County Judge Kevin Harrell form dismissing one of the plaintiff’s claims in the circuit court for lack of venue.

The Supreme Court held that venue was proper in any Missouri county when personal and subject matter jurisdiction are established.

“It adopted the plaintiff’s argument that, as long as personal jurisdiction is not improper, and the state venue statute doesn’t dictate a particular forum for the lawsuit, a plaintiff’s lawyer can pursue the case anywhere he chooses,” the report states.

St. Louis also has become a recent hotspot for asbestos litigation as its docket continues to grow.

The report notes that just 67 asbestos lawsuits were filed in 2010. But by 2014 and 2015, St. Louis had the fifth largest asbestos docket in the country with about 230 cases filed per year.

The court saw approximately 133 new asbestos lawsuits filed in the first half of 2016.

What stands out more than the number of cases filed are the multi-million-dollar asbestos verdicts.

In comparison, while the Madison County Circuit Court is considered the nation’s busiest asbestos docket, the jurisdiction hasn’t seen a plaintiff’s verdict in years.

However, St. Louis did see one defense verdict in September after a month-long asbestos trial against Ford Motor Company, Volkswagen Group of America Inc. and Honeywell International.

These cases include allegations of misleading labels on food products.