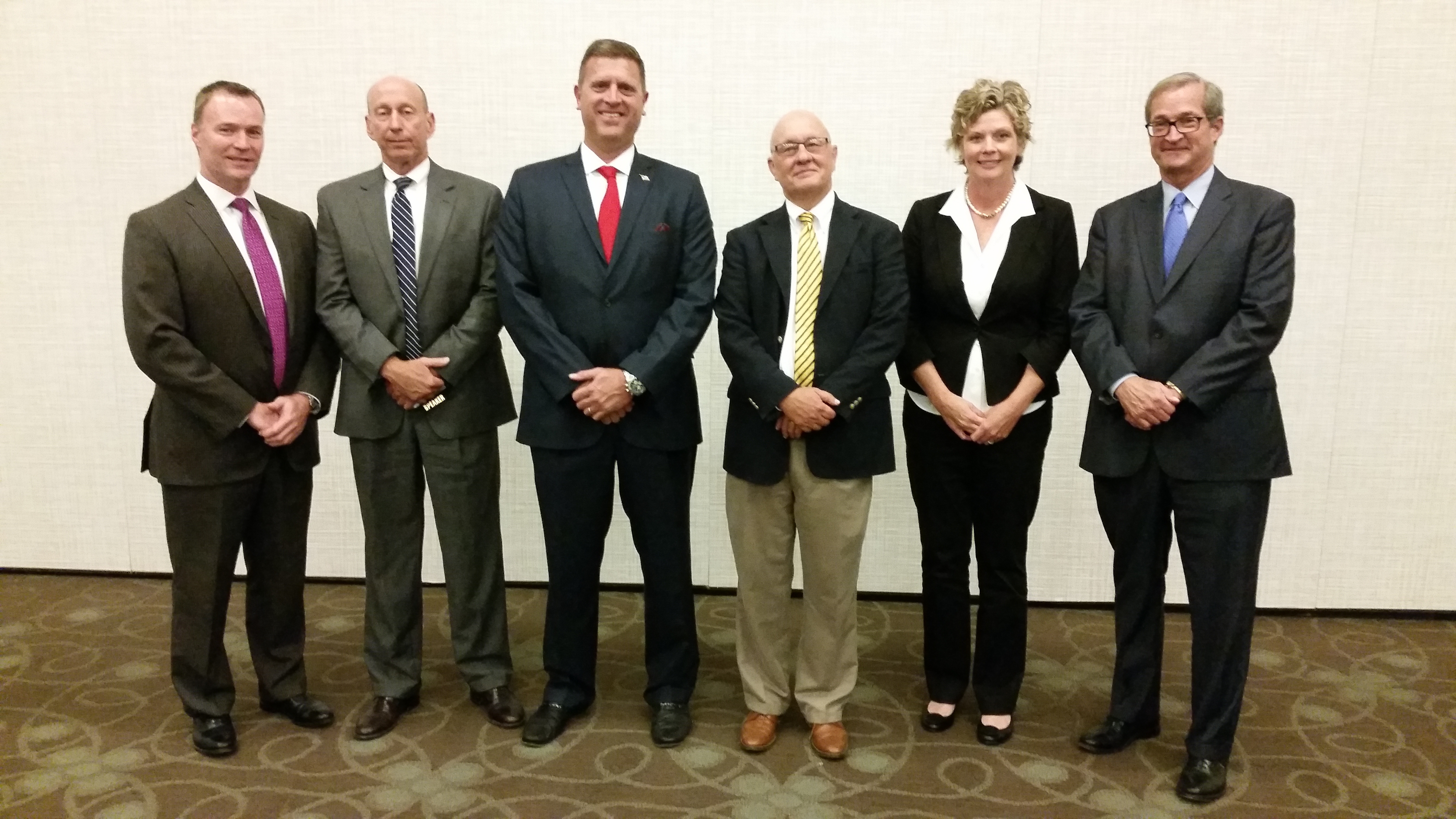 The Fifth District Appellate Court candidates introduced themselves and shared why they are qualified for the position at the Illinois Association of Defense Trial Council's appellate judge candidates forum on Wednesday at the Doubletree Hotel in Collinsville.

Madison County Circuit Judge John Barberis, who is running on the Republican ticket for the vacancy created through the retirement of Bruce Stewart, was the only candidate to address the recent media campaign spearheaded by Fair Courts Now. He said he suspected “big money” would play a role in the race as Election Day approached.

Barberis said he does not believe opponent Williamson County Circuit Judge Brad Bleyer had anything to do with the ad campaign.

Barberis said he didn’t find the television ad to be too offensive and actually said the ads have allowed him to reach more people than he could have on his own.

“The good part about this kind of money getting involved in this race, and I kind of need to thank the people who put it together, because it’s provided me with the opportunity to get my name out to more people than I ever could have done on my own. For that reason, I’m almost grateful,” he said.

Barberis explained that in his race for circuit judge, he didn’t have much money. He said the campaign was not completely self-funded, but he never raised more than $5,000 or spent more than $5,000.

He added that people were shocked when he won because his opponent, Madison County Associate Judge Clarence Harrison, raised $112,117 in individual contributions and loaned his campaign close to $30,000. Barberis won 54 percent to 46 percent.

“I think I did that too well, because there’s not a lot of money again, and I guess people think ‘Well he doesn’t need it,’” he said.

The theme of the negative ads so far have focused on the Illinois State Bar Association polls, which determined that Barberis was not recommended.

“The thing of all of this is simply that people really don’t care what the ISBA thinks of judicial candidates,” he said.

“I kind of wear that rating as a badge of honor, because the integrity of that process is in question,” he added.

Barberis explained that Justice James “Randy” Moore was highly recommended by the Judicial Board that did their interviews and was appointed to his current position by the Supreme Court. Yet in the ISBA poll, lawyers who claim to know Moore did not recommend him.

“If you have the integrity to do it the right way, then you’ll do it the right way," he said. "If you want to play games with people’s careers and lives … don’t expect me to cower down and say well they don’t like me. Because quite frankly it doesn’t matter.”

However, Barberis did express some concern about the ads.

“The thing is, the ads are going to work if people don’t know anything about me.”

Barberis was born and raised in Collinsville. After a brief time at Eureka College, he graduated from Illinois State University.

Upon graduation, he became a home detention officer in the probation department while determining which law enforcement agency he hoped to join.

However, he later chose to go back to law school at St. Louis University.

He started as an assistant state’s attorney in Madison County before switching to civil law and opening his own firm.

Then in 2012, he decided to run for State’s Attorney in Madison County without any political experience beforehand. The Republican party already had a candidate, so they asked him to run for Circuit Clerk.

“Me being the political newbie, I didn’t realize just how popular Mark Von Nida was,” he joked.

He said there was a fear among Republicans that if you ran on a Republican ticket in a Democratically-controlled county, that your career was pretty much over if you didn’t win.

“I found the opposite to be true. My career blossomed … so I was perfectly happy when I lost and I was content where I was,” he said.

But then in 2014, the Republican Party approached him and asked him to run for circuit judge when former Chief Judge Ann Callis stepped down from the bench to run for Congress.

He was sitting at a Triad Middle School basketball game on election night. By 8:30 p.m., he had been unofficially declared the winner.

Barberis said he was the most shocked person in Madison County and didn’t expect to actually win.

“But this race is a different animal,” he said of his appellate court campaign.

Running in Madison County was difficult because the county was big. But when you run in 37 counties, you have to be everywhere all the time.

Bleyer is running on the Democratic ticket for Stewart’s seat.

“This is kind of a unique year where you have two seats that are elected at the same time,” he said.

Bleyer focused mainly on his time on the bench.

Bleyer has been a Williamson County judge since 2004 when he was appointed to his seat. He then ran unopposed in 2006 and was retained in 2012.

Prior to his time on the bench, he was a practicing attorney for about 21 years in southern Illinois.

As an attorney, he primarily did insurance defense.

He also worked as a teacher and coach before attending law school.

He said his proudest moment was when he was appointed to the bench.

“I consider it a privilege every day that I go into work and sit on the bench. It’s a privilege to work for and serve all of you,” he said.

Bleyer also said he has worked with skilled attorneys and judges who taught him to practice law the right way. He now tries to pass that on to young lawyers who come into his courtroom.

Moore is running on the Republican ticket for Wexstten’s seat.

He said running for office in the Fifth District has not been easy.

“It has been a difficult process to get to discover all the 18,000 square miles of the Fifth District,” he said.

Moore grew up in Carterville. After high school he went to Southern Illinois University. He later attended SIU law school.

He began his law career with the City of Carterville before venturing out to begin his own practice, where he worked for 20 years.

“I’ve handled just about every kind of case that you can imagine,” he said.

He was appointed to the bench in Williamson County in 2007 by Supreme Court Justice Lloyd Karmeier. Then in 2008 he was retained.

He said closing his private practice was one of the most difficult decisions he had to make.

In January 2015, he was appointed to the Fifth District by Karmeier to fill a vacancy created by the retirement of Justice Stephen Spomer.

“I really take seriously my role as a judge. To get it right. To be fair,” he said.

Having been a sole practitioner, he said he will never forget what it is like to be a lawyer trying to handle a case, which makes him a better judge.

Moore recognized there are a lot of challenges facing the legal community today, including technology changes and confidence in the judicial system.

“One of the reasons I am running is to maintain that confidence in the judicial system. I want people to know their judge is fair and impartial,” he said.

Moore said he has also gained life experience to make him a better candidate for the Fifth District bench.

He said his house caught fire, and during the same time he was fighting kidney failure.

He said he didn’t expect to live to see age 50. He had a kidney transplant in 2006 and is now in better health than he has been in since the 1980s.

Jefferson County Circuit Judge Jo Beth Weber is running on the Democratic ticket for the vacancy of James Wexstten.

Weber was born and raised in Jefferson County.

Weber has represented people on appeal in every appellate court in Illinois, including the Supreme Court.

“I think that experience and also the experience of being a legal adviser to four different appellate court judges prepares me for this job probably better than just about anybody who ever ran for appellate court. And I’m not bragging, that’s just what my experience is,” Weber said.

In 2012, she ran and was elected for an open seat for resident judge in Jefferson County.

“Judge Weber gave new meaning to the term ‘pounding the pavement,’” said Paul Lynch during his introduction for Weber.

She won by over 60 percent, which “by anyone’s definition qualifies as a landslide,” said Lynch, an attorney with Craig & Craig in Mattoon.

As resident circuit j00udge, it is her responsibility to assign dockets. She said she assigned the dockets according to what the other judges are interested in. Then she took whatever was left over, which included the criminal docket.

“I know that sounds crazy with my appellate court experience,” she said.

But she said people approached her and recommended she seek the position.

Weber said going through elections is very difficult, but they have to make sure they don’t let outside influences change the way they make decisions.

“As judges, we can’t allow anything to affect our decisions that we make in the courtroom.”

She also said she wanted to be remembered as “a respectable judge. As a judge who treats everyone fairly, impartially. A judge who actually changed people’s lives.”