Ray Coleman: Accepted at White House but not in East St. Louis? 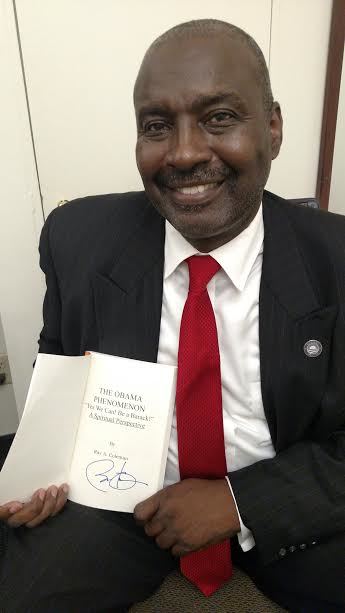 I have been testing that theory for the 33 years since coming home from Quincy (College) University in 1983 with a BA degree in Sociology.

The Christian and worldly experience I acquired during those 33 years has proven to be more valuable than my degree.

I thank the Madison Record for allowing me to write this guest editorial. The paper has been nothing but fair to me. It is with honor I share this short piece of history with your readers.

On Saturday morning September 3, 2016, my wife and I sat down to order breakfast at Cracker Barrel.

In this 21st Century it is normal for us to pick up our cell phones to check for messages, check our Facebook page, etc. Well this moment was no different until I opened one email awaiting me. it was from the White House.

The email began, “Dear Mr. Ray Coleman and guest,” then it followed with, “The President requests the pleasure of your company at the Obama Illinois Reception to be held at the White House on Friday, September 30, 2016 at Four O’clock.”

With an emotion I had to control due to my public awareness, I fought back the tears of joy, and gave my wife Cynthia the phone.

We immediately began to talk about our travel plans.

I spent a little time afterward making a couple phone calls to see how my name got on the list. My first call was to the person who introduced me to Barack Obama, Mike Pittman in Springfield, Ill., the second call was to Dan Shomon in Chicago, Barack’s former U.S. Senate campaign’s political director. It was Dan who confirmed my inquiry as to how I became a chosen one. At the same time I was asked not to broadcast the invitation.

From September 3 until September 28 I remained relatively quiet until I woke up that morning with a revelation.

I will be the first to admit, I am a gadfly, maverick, a rock the boat kind of guy. I am not an easy guy to get along with if you are dishonest, corrupt, a leader who refuses to lead, a selfish or ineffective bureaucrat, steal from kids, steal from the government. Again, I am by no means perfect, but I try to wake up every morning wanting to do good.

Now comes September 28, I go on to Facebook wanting answers why I can’t break through as a voice of reason in my hometown.

My Facebook post read, “I have a few things that bother me. I am asking for help to answer some questions about me, and the culture in the greater East St. Louis area:”

Question 1) Why do Democrats like Bob Sprague and Mark Kern continue to get support from our African-American leaders when they have a documented history of bigotry?

Question 2) Why do so many African-Americans who know me refuse to acknowledge why I am attacked and pushed back, fired, laid off, etc. from every potential leadership position that I have held in the metro east, (even though I had a record of success) including head basketball coach at East St. Louis Sr. High School, volunteer interim Executive Director Katherine Dunham Centers for Arts and Humanities, volunteer assistant to East St. Louis Mayor Emeka Jackson-Hicks, public service administrator Illinois Department of Natural Resources?

Question 3) Why Anne Walker was left a video of Barack Obama acknowledging that I was his surrogate messenger from an event in Venice, Ill., 2004, by her late father Willie Walker, she refuses to even respond when I ask her about it (I must be honest, my brother Lee Coleman won't give me a copy either).

Question 5) Why have I been able to garner respect around the State of Illinois and around the country by working as a deputy field organizer for President Obama in Iowa 2012, and for legendary NBA superstar Michael Jordan, at his basketball camp since 2010, but I continue to get rejection from so many leaders and grass roots organizers on the local level when they have to align with me publicly?

Please someone answer these questions, I can handle the truth.